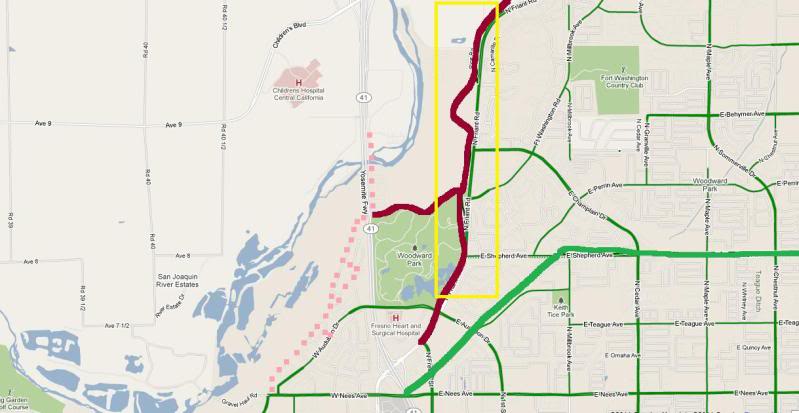 For over ten years now, the city has been planning to extend the Eaton Trail, a pedestrian, cycling and equestrian trail that runs in the northern portion of the city, parallel to the San Joaquin River.

The existing portion begins (or ends?) at Woodward Park, and heads north, parallel to the busy Friant Road. It’s a comfortable trail, with curves and changes in grade prudent to recreation, but also a good alternative to biking on the very busy highway next to it. I’ll have pictures of that trail soon.

So here is the project:

In the above diagram, the existing Eaton Path is visible in red. It ends just north of the screen capture. One branch heads to the south-east portion of the park, while the other stays on the north side of it. The park has it’s own system of trails which allows for a recreational loop (either on a trail or in the 15mph roadway).

The yellow box indicates the section of the path that is a good alternative for commuting on the parallel road.

The southern branch links with some sidewalks trails (10 foot sidewalks) which gives you access to the much longer Fresno-Clovis Rail trail (in green).

The northern branch ends in a chain link fence. Unlike with car infrastructure, no warning is given that you are biking downhill into a wall. Enjoy the ride back.

There are two planned extensions. One would require a bridge over the river to let cyclists cross into Madera and access the valley children’s hospital.

The other would be strictly for leisure, as it would meander across an empty meadow area, near the river. Any commuting cyclists would take the shorter Audobon road option.

The extension currently being debated is not the bridge, but the river path.

So the major purpose of this path is leisure, not transport, but it does help expand the cycling network because it stands to reason that those biking on the path will also bike to their homes.

So the grand total cost of this project? $2.5 million. Sort of. The Bee article doesn’t clarify if the $2.5 million will cover the 2 mile extension or the 22 mile master plan.

On it’s own, not insignificant, but it IS pennies compared to what the city and county spends every years expanding roads. Not maintaining, but expanding. The $100 million + freeway extension can be seen in a post from a couple of weeks ago.

Of course, when it comes to infrastructure for bikes and pedestrians, getting any funding is like pulling teeth.

But in this case, it seems like the funding is already there.

So what’s the holdup?

And slow bureaucracy for second. EIR is scheduled for this year (maybe) and then council vote next year (maybe).