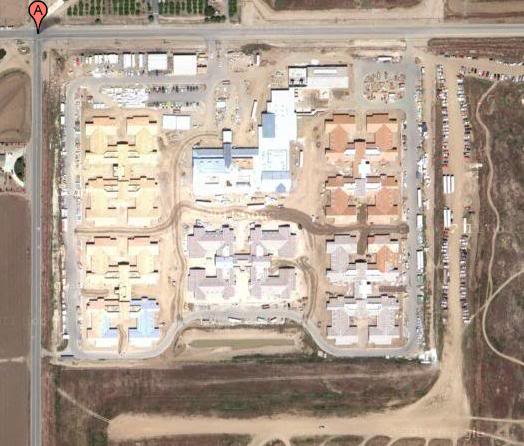 That’s right, more residential development out in the middle of nowhere, and this time, it’s government funded.

A few weeks ago, I posted about a housing developer planning a retirement community in the middle of nowhere.

Yesterday’s Fresno Bee highlighted a new residential community, and this one is for veterans.

The article, “Budget cuts delay opening of Fresno veterans home” goes into details of the government funds that are helping build this thing. Federal, state, and I believe even local monies are being put into this housing complex, which is being created to help veterans.

“Once it opens, the Fresno home will provide a variety of services to 300 veterans, including rehabilitation and minimal personal care.

The home will create about 400 permanent jobs.”

300 residents, 400 jobs? That’s a pretty big complex. That’s a lot of people coming and going. A real hub of activity even. One might even call it a large traffic generator. More on road access later.

Now, like all residents, veterans want access to the community. Grocery stores, restaurants, shops, cafes etc. But on top of that, they also need access to medical services.

“”I’m optimistic that we can find a solution that will ensure the men and women who selflessly served our county have access to the care they deserve,” Perea said.”

Exactly. And what better place to get care than in a developed area, by existing stores, the existing Veteran’s Hospital, dentists, care providers etc etc

But one thing the Bee article didn’t touch on at all is the realities of the location of this new home.

A location that presumably was approved by the feds, state officials and local officials, because they all chipped in money.

A location that should provide the vets the care they need, with easy access from visitors and the ability to be involved in the community.

And this is what they got.

As I said, big project

But let’s zoom out a bit.

See a store? See a hospital? See any form of development…? See a sidewalk or bike lane or park or….anything?

Maybe I strategically cropped the image to make it only appear like this new home is out in the middle of nowhere. Lets pull back a bit more.

Ok, so there are SOME bits of urbanity over there on the right.

How does that relate to the actual city?

Yeah. Not very well. The freeway triangle is what is considered downtown. The city grew to the north and east of it.

Out of curiosity, where is the VA Hospital?

(Fun fact, 180 was only just extended that way, I guess now someone is going to use it)

As I mentioned before, this is a large building, so it will generate a fair amount of movement. But since there’s absolutely no pedestrian, cycling or transit access, every single resident, visitor and staff member will have to arrive by car.

I’m sure older vets will love dealing with this road after dark.

One last point, what kind of social message is this sending to the vets? By building them a home far away from absolutely everything, this doesn’t exactly scream “we love you, thanks for the service!” but appears to be more like “go where we don’t have to deal with you” or perhaps “get out and stay out”.

There’s a reason prisons are generally built in the far-off outskirts. Why are we giving these veterans the same treatment?

Once could argue “such a big complex requires a large amount of land, I’m sure they would have built it closer if land was available”.

One positive note: That parcel of land is being turned into affordable apartments. But again, wouldn’t it have made more sense as vet housing…? It’s not like there was a shortage of urban land elsewhere for the apartments.

3 Replies to “Government Sprawl: Sending the veterans out to pasture”