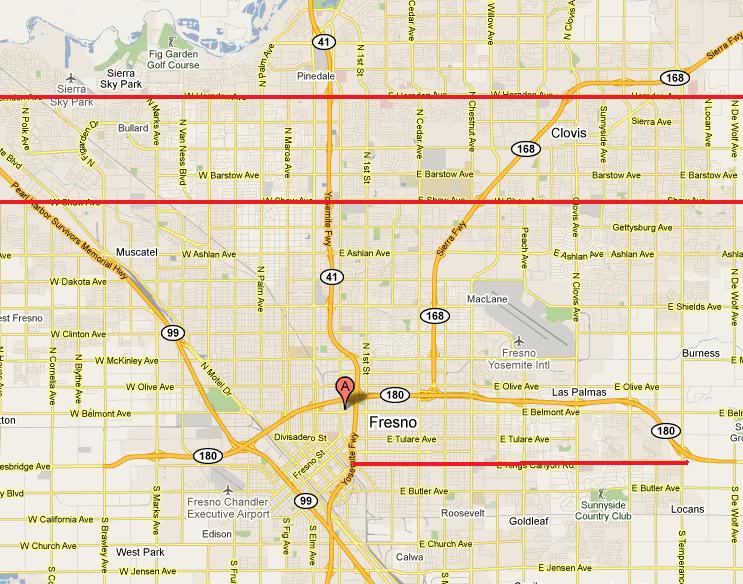 While on my way to eat at a Mexican restaurant on Ventura Ave (Castillo’s) I noticed something interesting….bike lanes. Those weren’t there before, right!?!

That area isn’t part of my daily routine, but I do pass by every other week or so, and I’m pretty sure I would have noticed them before. I wasn’t sure though, so as soon as I got home, I looked at Google’s satellite imagery, taken in April, and I’m right, the lanes are brand new.

So Fresno has finally painted bike lanes on one of their busiest commercial corridors!

These streets are where most of the business’s clutter. Stores, restaurants, lawyers offices, doctors, you name it, they’re likely on one of these three main corridors. Accordingly, Shaw and King’s Canyon are home to two of the busiest bus lines (Herndon doesn’t have one).

But do you notice what’s missing?

That’s right, none of them have bike lanes!

From what I understand, the logic seems to have been that because these streets were so busy (lots of traffic generating businesses) they shouldn’t have bike lanes. There IS room for bike lanes*, but the city decided that it would be too dangerous for cyclists to use these roads. After all, with so much traffic + curb cuts, it’s simply not a safe place to ride.

(*Shaw and Kings allow parallel parking, but because of mandatory parking lots, there is absolutely no need to park in the street, and no one ever does)

The problem with that logic is that they were thinking only of recreational cyclists. Sure, if you’re riding for fun or exercise, do NOT pick one of those three streets.

But the thing is, why do they have so much traffic? Because that’s where people want to go!

Thousands of stores means thousands of customers and tens of thousands of employees. If these customers or employees choose (or are forced to) bike to their destination, they can’t magically teleport there. The only way to access those businesses is to ride on the busy street.

Even more significant is that King’s Canyon is in the poorer section of town, so many people rely on biking. If anyone ever claims that no one bikes in Fresno, make them stand on the corner of King’s Canyon and Chestnut, and if they don’t count 5 bikes in 5 minutes, buy them a $1 taco at any of the nearby taco sellers.

So a bike lane would help tremendously.

And it looks like someone at the city has finally agreed.

Bike lanes have been painted on at least 2.5 miles.

The red box is where I saw the new lanes. The pink boxes are the natural conclusion of said lanes, but I didn’t drive on those sections to check. (To the east is the city line with Clovis, to the west is downtown, where Ventura narrows)

I’ve searched deeply into the city website, including 2 months of council agendas, and haven’t found a single reference to the new lanes, so I don’t know exactly when they were painted (within the past 2 weeks at least), when they were approved, and how long they extend. I also haven’t found a single news article about them. While the Bike Master Plan shows the bike lanes as planned, the master plan is a fantasy which shows bike lanes EVERYWHERE but with no timeline.

The city should do a better job of publicizing these new lanes.

On Ventura, the city was able to paint them away from the curb to allow parallel parking. Because that section was developed before the 1950’s, many businesses are built right up to the sidewalk with no parking, so the curbside space is well used.

On King’s Canyon, which developed later, the bike lanes go directly against the curb. There is no need for parking because every single business has an (overly large) private lot.

The bike lanes are standard size 5 or 6 feet wide, with broken striping near minor intersections. In an unusual configuration, at bus stops, the left white line continues to be solid, but there is no right white line.

Unfortunately, near major intersections, where a right turn lane is painted, the lane disappears, abandoning riders in the most dangerous part of the road. There is not even a striped pattern connecting to the right turn lane, as seen elsewhere in the city.

But still, much better than nothing.

I’m going to try and take pictures and find out when they were painted, and if more are planned. Last summer, all of downtown saw new bike lanes, so clearly June/July is paint season here.