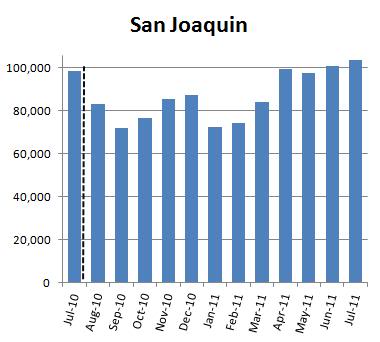 Just two weeks ago, Amtrak belatedly released their June report, showing the San Joaquin breaking 100,000 for the first time. That was an increase from April, in which the California trains also experienced new records.

Well, records are meant to be broken, and the July number show some more impressive gains.

San Joaquin
The San Joaquin, serving Bakersfield to Oakland and Bakersfield to Sacramento, with 6 trains a day (each way) had 103,933 riders, up from 100,947 in June. This is an all time high for the line.

What’s especially exciting about these numbers is that the planned High Speed Rail line will begin construction in the central valley next year. The line will follow the current Amtrak route from Bakersfield to north of Fresno, before diverging. Many editorials criticized the initial construction segment, calling it “nowhere”. Apparently, “nowhere” is a popular place to ride the train, more so than so called “somewheres” along the East Coast (see final chart).

The summer is traditionally the best time of the year for the San Joaquin. Here are the past 13 months.

Year over year improvement, the last three July’s have each seen new highs

Pacific Surfliner
The real star of the Amtrak California system. The main focus of this route is to serve San Diego and Los Angeles, but some trains do continue north to Santa Barbara and onto San Luis Obispo.

Like the San Joaquin, each July has exceeded the previous July.

This line offers service between Sacramento and San Jose, via Oakland. It is a busy commuter route, and popular with people doing business in Sacramento.

The peak is a bit earlier in the year.

Still up year over year, but barely.

And here’s how they all look together over the past year.

Finally, here is how the lines compare with the national network.