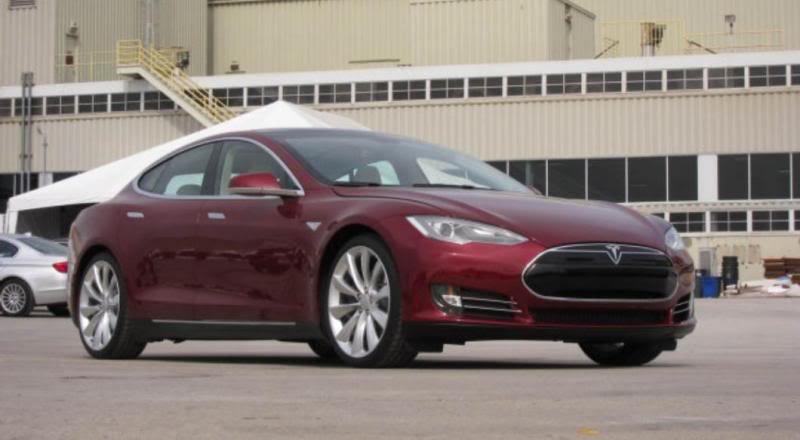 I am interested in the move towards electric cars because of what it means for the quality of our air. As you may know, I live in Fresno, which may be named the dirtiest air in the country for the year, or maybe next. An exciting milestone for sure. We’re number 1!

However, while reading about this new car something caught my eye. Something very unfortunate.

All images courtesy of Autoblog.

The exterior is certainly agreeable.

But what’s inside is what is troubling. Check out the main “comfort” interfase, where radio, air conditioning, etc. is handled.

On the infotainment front, Tesla is using a 17-inch multitouch display, with a persistent climate control interface at the bottom (good for muscle memory). It’s just as massive in person as it is in photos – it’s essentially two iPads worth of screen real estate – and provides drivers with Google Maps navigation, streaming Internet radio, local music playback, web browsing (HTML5/Webkit-based) and sunroof controls through an infrared touch system. Just like everything else with the Model S, it’s still in prototype form, with a capacitive screen set to replace the IR version and the Linux-based OS and its proprietary user interface skin to receive more tweaks between now and the on sale date next year.

Look, I understand that the iPad train is in full swing right now (RIP Steve Jobs), but do the people at Tesla not see why this is a problem?

Let’s start with the obvious. Giant screen full of entertainment options, colors, etc = a distraction. Especially when this device is angled towards the driver. Driving is boring. Music, videos, the internet? Less boring.

Autoblog even has a video showing you all the cool features you can use with this system.
http://www.youtube.com/watch?v=DZaaDSKkagA&feature=player_embedded

But do the Tesla engineers not realize they’re designing a car…? A large heavy piece of machinery that can drive very quickly? Something that requires a large amount of concentration to properly control? Something that shouldn’t play second fiddle to entertainment? I mean, if you need so much internet, music, video and shopping right now, why are you driving? You can have your iPad, and devote it your full concentration while riding the train.

Of course, the standard answer to this is “don’t use these features while driving.” Brilliant. It’s not Tesla’s fault that they’ve designed a 17-inch siren drawing away the eyes of the driver. A reasonable and prudent driver will focus on the road, naturally. And of course, these features must remain active while driving because the passenger can safely use it. Again, even though the screen is angled away from the passenger.

But fine. Let’s take that. Let’s accept that no driver will ever be distracted by the entertainment features offered. Those sweet, sweet features.

That doesn’t mean it’s any safer.

Even the safest and most prudent driver uses their center console to make adjustments to their music and temperature. If one is driving alone, and is too hot or too cold, then reaching over with the right hand to turn a few knobs is standard fare. Pretty safe too, if you’ve been driving the car for awhile. As the article mentioned, people have “muscle memory” and we all know which dial does what. And it’s pretty simple too. Reach arm out, feel what the buttons and knobs are by touch, and then turn left and get less air or quieter music. At least my vehicle has very distinct buttons that even a blind man could navigate.

The thing about touch screens is that they offer absolutely no feedback to the user. Go ahead, pull out the smartphone you’ve been using for 18 months and without looking at it, use the touch screen to navigate to your favorite programs. You might do this every day, 10 times a day….but you’re always looking at it! You need to know what you’re pushing and if the screen is reacting properly to your touch. Or how about comparing texting with a phone that has a keypad (or keyboard) with a touchscreen model. One can be done with hand in pocket, one cannot.

There’s no way to know, without looking, if you’re touching the “65”, “up”, “down” or none of those when trying to adjust the temperature. You might be frantically tapping “defogger” and not understanding why the air isn’t getting warmer.

So if the driver wants to make any adjustment, he will HAVE to look at the screen to find the right place to touch, and then look to make sure the adjustment was properly made.

And don’t forget that button pushes are slower than knob turning. That is, take your device from 10 to 0 with a touch screen “button”. Push and hold. Now try it with a knob. Immediate strong twist, and we’re done. Slower means more time not focusing on the road.

Notice anything in all these pictures?

Glare. Massive glare. A 17 inch shiny reflective surface….is not good. Not good at all. The driver can (and probably will) be blinded when the strong summer sun is reflected in all its glory straight into his eyes.

And you though that rare reflection from the passenger’s watch or phone was a problem.

Night is also an issue. You know why the lights are always off inside the cabin when we drive? It’s because the light is distracting, makes things harder to see outside and disorients the driver.

How about 17 inches of white light being always on….? Even at a dimmed setting, that won’t be very nice. Again, take your phone, put it at the darkest setting, and let it sit in your passenger seat at night. Distracted yet? And how can you turn it off if you need access to those basic sound and temperature controls?

The Tesla engineers need to take their creation out of the test track and into the real world and realize that they’re not building a toy that will only be used at home or at the track, but in mixed traffic in real life.

And what they’re building right now is a recipe for disaster.