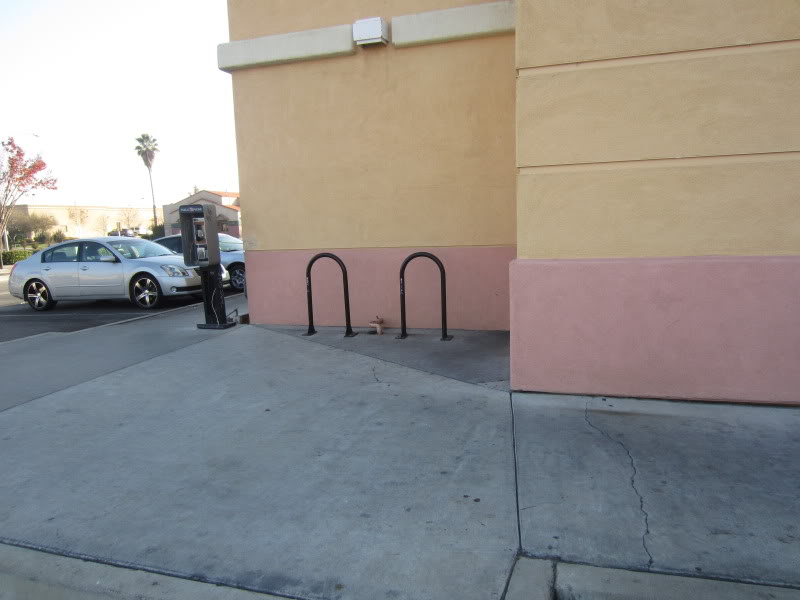 So how is it that so many developers and contractors continue to install racks incorrectly? How does it happen that during the process of drilling into the concrete, nobody says “hey guys, I think if we put it this way, it will be useless”?

Everyone knows the general size of a bike right? You wouldn’t design a parking space 5 feet wide, because even someone who doesn’t drive could dig deep into their mind and think “hm, I think cars need more space than this”.

I would understand if we were talking about Segway parking. Very few people have ridden one. Many have never see one, and some have no idea what it is. So yes, I would understand contractors looking at a “Segway Parking Rack” design and not knowing what to do because they’d have no understanding about the basic build of a Segway, and what is required to keep one locked up.

Here’s a quick way to take bike racks designed to hold 4 bikes, and make them only hold two….awkwardly.

Place them facing the wrong way (90 degrees off)

And place them too close to a wall

It sort of makes me feel that if the guy who drew up the plans wasn’t able to space the rack properly…then how can we trust the structural integrity of the entire building? And if the contractors are so dense as to install the rack so they face the wrong way, what if they’ve done the same with the gas main or a structural beam?

It shouldn’t be this hard.