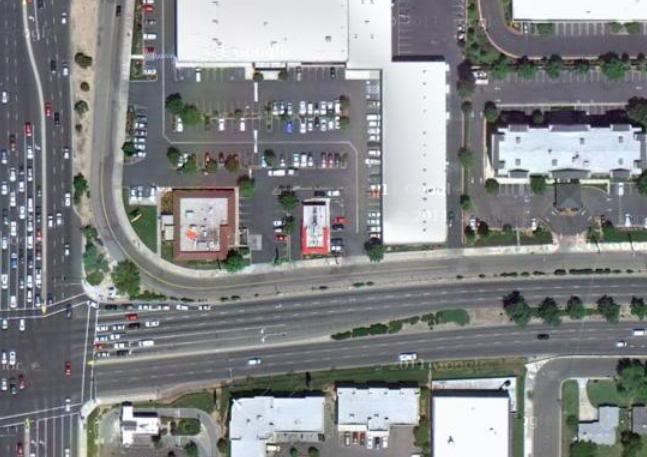 I was using Google Maps the other day to find the location of an office, as I had a medical appointment to get to. The office was located off Herndon, a street Fresno has developed into a limited access highway. There are no driveways or mid-block turns on Herndon, the only way on and off are at intersections .5 miles apart. So to get to the medical office, I was looking to see the best intersection to turn off.

That’s when I noticed something quite odd, and very wasteful. A triple road.

Sections of Herndon were developed with a “frontage road” which is where all the driveway entrances are, and where street parking is allowed. This isn’t surprising, as Fresno has many frontage roads. I’ve always thought them to be a waste of space and money, but oh well. Mind you, as far as I can tell, frontage roads are a thing of the past and are no longer being developed.

A common frontage road off Herndon

What caught my eye is a locations where there is Herndon, a frontage road (no name)…and then another road! Three parallel roads! And three medians!

I know land is cheap here, but come on!

And then behind those 5 homes? An alley. That’s a whole lot of road space. Those homes must be really important if their driveways need a private frontage road, and an alley buffer in the back.

Here’s a useless comparison, but one way to think about how space can be allocated.

The distance between the edge of Herndon and that alley, where they’ve just managed to squeeze in a few homes, is 423 ft

Which is much more than what the empire state building and the two streets that serve it take up.