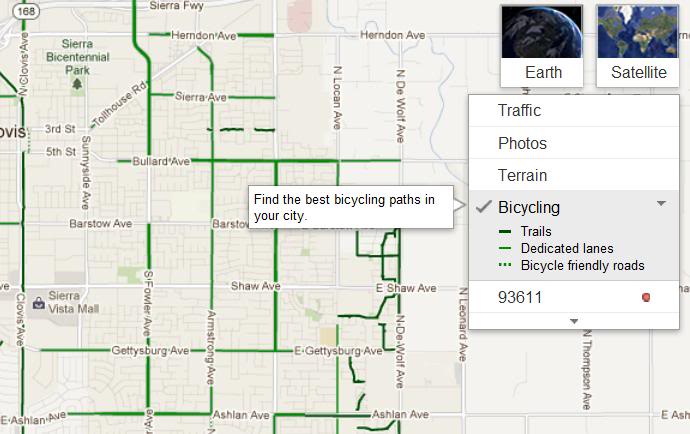 This is an ongoing series about commuting to work by bike, sometimes. It will detail the problems I’ve faced, and the solutions I’ve found. Hopefully, it’s helpful to someone out there.

As I wrote recently, I am now commuting to work on bike, sometimes. In fact, I didn’t even commute once on my bike last week due to a number of reasons, but I do have plenty to say about the two weeks prior. I’m going to hit the saddle again starting today.

The most important part about switching to a commute on bike is to find a suitable route. What’s especially key is realizing that the roads you take on a car are unlikely to be the same ones you’d want to take on a bike. That is, a little bit of research is in order, because following the same path to work when switching modes may lead to bad results.

There are many reasons why you may want to use alternate streets. A big reason can be the lack of bike lanes on your car route. As I’ve mentioned too many times to count, Shaw is the big driving road in town, but without any bike facilities, it’s dangerous and uncomfortable to cycle on.

So like me, you may find yourself forced to take a mile long detour just to feel safe. It’s not all bad though. You may find that your longer route actually saves you time in places. On my commute, it means much shorter waits at stop lights, and I even get to take advantage of a shortcut not available to cars. The detour is certainly less stressful.

How do you find the route?

I’d suggest starting with google maps, activating the cycling mode, and seeing what it has to say.

It’s very important to note that the cycling directions are far from perfect, and don’t necessarily reflect reality. So once google suggests a route, explore it using the satellite and streetsview mode to confirm that it makes sense. Also take into account changes you’ve seen that haven’t been added to the map, like a new traffic light or new bike lanes.

You can then move the line around to create a route suitable to real-world conditions.

Now that you’ve picked a route, test it out. If you rarely bike on road, then I suggest scoping out the path in a car, again to look for details that Google missed. Once you confirmed it’s a safe route, then try it on your bike in a weekend.

Trying it on a bike will let you know of one very important thing that google won’t tell you about, and you may not even notice in a car…

That’s right, that perfectly flat route you drove on? Actually not so flat. Only on bike do you come to realize that slight variances in slope on the route. These variances will play an important role on how much time you need so as to not get sweaty on your way to work.

This looks flat. But it’s not. On a bike, you feel the difference, and it can be the difference between arriving cool and comfortable or overly warm to work.

So we have a route, and we know know it’s safe, AND we know how much effort it will require. Excellent.

There’s one last step, timing the route. If you live somewhere like Fresno, odds are, your job destination does NOT offer showers and such, meaning you want to minimize the amount of sweating you do. That came into play with the hill thing, but it also comes into play with the time you take to get to work.

I timed the 4 mile commute to work at an easy 15 minutes, meaning I was averaging 16mph. One problem though, that left me very sweaty, not at all suitable to work.

So try the route at a slower pace. I do my 4 mile commute in a relaxed 25 minutes, or biking at slower than 10mph. That means sweat is no longer a major issue.

I think those added 10 minutes are more than worth it.

NOTE: If the city had been so kind as to design all their roads to be accessible to bikes, my commute would only be 3 miles long, and take around 18 minutes.

Another reason to scope out your trip is to find shortcuts you may not know exist. Off-road trails are the obvious one, but google does a good job of pointing them out. Of course, google isn’t perfect, and it may take some sleuthing to find a secret bike trail that can save you time or simply offer a more comfortable route.

Here are a couple of other shortcuts I’ve noticed.

If there’s something in the way that screws up the grid, there may be a shortcut available to pedestrians and bikes. Here, a bridge over the canal is available only to those on foot and bikes.

Sometimes, the thing in the way might simply be there to stop car traffic. As a bike, that’s not a problem. One can simply going around this traffic diverter by legally using the crosswalk, a shortcut not available to people in cars.

Parks are similar. They may require a lengthy detour in a car to get around, but trails within the park are open to those on bikes.

You notice I mention sweat a few times. I sweat extremely easily, much more so than the average person. So making sure my commute was slow and relaxed was of the utmost importance to me because I do not want to be sweaty at work.

This may be different for you. Or it may not. That’s why I highly advise doing the route on a real test on the weekend. Time yourself. When you arrive, sit down and wait 10 minutes to let your body process the situation, as the sweat may not come until you’re done.

Of course, once you’ve got the timing and route down, this isn’t something you need to repeat in the future. I now know exactly at what time I need to leave the house to arrive at work in the most optimal condition.

In a future installment, I will talk about other sweat strategies, including changing clothes and such.

Mind you, if your place of work offers showers…then sweat isn’t an issue at all.

Things to look out for.

The clock just changed last week, so for most of you this won’t be an issue, but if you do bike at night, as I do, then scoping out the route will also include making a note of where potholes and grates are, which you may not see after dark. In another post, I’ll talk about lights, but even excellent lights may not pick out tricky potholes that can be hard to see even in the day.

On top of that, suburban streetlights are placed too far apart to provide continuous lights, so shadows can mask potholes and such.

Because my commute involves being relegated to a secondary street, traffic lights bring both big advantages and major headaches.

The big advantage is that there’s a lot less waiting. Ironically, traffic on the major streets gets delayed for longer period of time due to the endless amount of time allocated to left turns, so people can get on and off the important avenue. Meanwhile, the left-turn cycle on a minor street might only last 6 seconds, just enough to let the one car waiting through. On Shaw, I’ve waited well over 30 seconds while the left turn phase was in progress in the direction I was going….but don’t forget that the perpendicular traffic also gets a lengthy left turn phase as so many want to enter Shaw!

All that time adds up, meaning you might save time using the secondary route, depending on how the traffic signals in your area operate.

I will be writing about this in the near future.

Anyway, so less waiting at lights is good, so what’s the bad part?

Well, because it’s a secondary route, the traffic signals aren’t as new or well kept as the main street.

So many times, they won’t detect my bike.

This intersection, where I turn left, recently got a light, so the sensors are new and responsive. There’s a bike specific sensor (the square one) but the car one is sensitive enough that it picks me up in advance and I don’t even have to brake, as the light changes as I reach the crosswalk.

Not shown: there’s a second car sensor behind this photo which activates the light before I even reach these two.

But I have no such luck at this one. A sensor is visible for those turning left, but impossible to see in the straight lane. I’ve tried multiple positions, moving around, etc, to no avail. This light simply won’t change for my bike. I emailed the city, and they spray-painted the location where the sensor supposedly is (almost in the crosswalk) but I just can’t get it to work.

So I can either run the light, or go out of the way to find the pedestrian button. I push the light on my way to work because there’s a lot of cross traffic. On my way home, the sensor on the other side does work, so it’s not an issue. However, if it didnt work, I would run the light as I’m always the only one around.

Finally, some lights are activated by cameras instead of sensors.

The problem here is that the timing is for cars. So this light changes as I approach the intersection. Fantastic.

Except I’m moving at 10mph, not 40mph. So the light changes to green for maybe 10 seconds to let a car cruise across the intersection.

But in those 10 seconds, I haven’t even reached the intersection before it changes back to red.

And then it refuses to change again, meaning I can run the light, or push the button.

It’s a pain in the ass, and it’s something that shouldn’t exist. Signals should be properly calibrated to change for traffic. I’m traffic, these signals should work for me.

Keep that in mind if you ever see someone on a bike running a light. They might be on their daily commute and know that it doesn’t matter how long they wait, the light won’t change for them. This may not surprise you, but I also plan on writing about that as well.

That’s all for today.

The next bike commuting post will be about parking the bike at work, clothes and other gear.