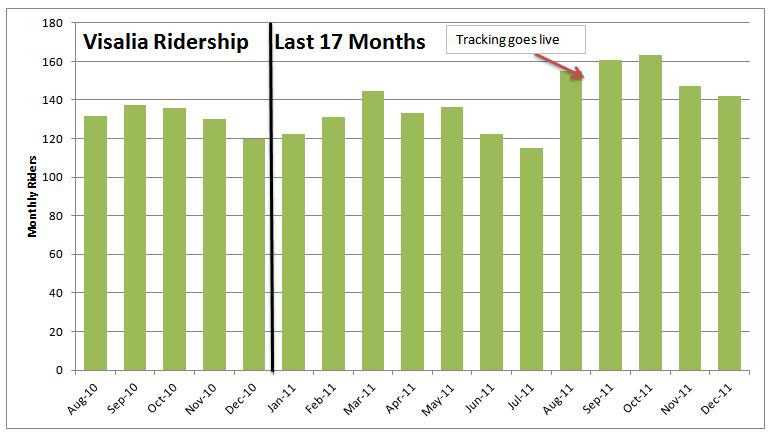 A few months ago, the city of Visalia, California, implemented a system which allows the public to know the actual location of buses, so they can better plan their rides. While this technology has existed around the world for over a decade, and has been slowly arriving in cities like Boston and San Francisco in the US, Visalia is the first city in the San Joaquin valley to implement the technology.

If you expected the roll-out of the technology to make some riders happy, but not have any other effects, you’d be wrong. Data from the APTA shows that ridership took a strong bump once customers were able to find out how long they’d have to wait for a bus.

A few days ago I reported on how ridership on the Fresno bus system has fallen even as national trends show ridership should be increasing. In that same post, I noted how Bakersfield has had steady ridership.

Only Visalia showed an increase, and a strong one at that. Their economy is doing just as badly as other nearby cities, so that certainly can’t explain the bump. Their routes haven’t changed, and while they did open a new transfer center, how many people do you know that would say “now that the transit center has new concrete, I’m totally going to ride the bus!”

That leads me to wager that the arrival of bus tracking has had a real effect on bus ridership.

Take a look at that bump and compare the ridership to the same months a year ago.

The bump helped define a continued increase in ridership in Visalia, including the highest ridership numbers in the small systems history.

Something not seen in Fresno or Bakersfield.

So why is bus tracking technology important?

Transit systems in cities like Fresno like to believe their riders are forced to be customers. They falsely believe that if someone has to wait in the hot sun for 30 minutes to board a bus, then so be it, because that rider has no other choice.

Around these parts, it is said that only those without a car ride the bus. That is, folks who are too poor to afford one, folks who are disabled, or those who had their license revoked. If you have access to a car, then you will use it.

That train of thought follows that if these people have no other choice than the bus, then the service can be horrendous and they’ll just have to deal with it. So these people have to wait 30 minutes in 110f weather because they can’t take a car. They’re going to ride, period, doesn’t matter how uncomfortable things get.

Let’s assume for a second that the stereotype is correct, and the only people who ride transit are those that simply can’t take a car.

These people actually do have a choice to ride the bus or not. They can chose not to make the trip at all.

All valid choices. All choices that do have strong negative impacts on the local economy.

And just as importantly, is to provide a service that people want to take.

It may not be possible to run a bus every 10 minutes down every street, but what is possible is what Visalia did, and give people the power to plan their trips. We all know that bus schedules (in America) are garbage. Arrival times are uncertain, and can vary greatly due to traffic and other factors. Giving people real-time information lets them plan around the variance.

If a bus runs every 10 minutes, then you never have to wait more than 9 for a bus to arrive.

If a bus runs only once an hour, and riders know that the schedule doesnt mean anything outside of the starting point, than one is forced to arrive 15 minutes early to make damn sure they don’t miss the bus if it shows up ahead of schedule. If the bus is late, that’s additional time baking in the hot sun.

But with bus tracking technology, the wait can be made where the rider is most comfortable. The rider can track the bus and arrive just 2-3 minutes before the bus, even if the bus only comes once an hour. That 2-3 minute wait is actually less than one might experience if a bus came every 10 minutes and didn’t offer tracking.

Giving the people the power to control their commute times by providing information is critical, and it is a pretty good way to get more people to ride.

If you don’t believe me, just ask Visalia.

2 Replies to “Bus tracker technology leads to increase in riders”