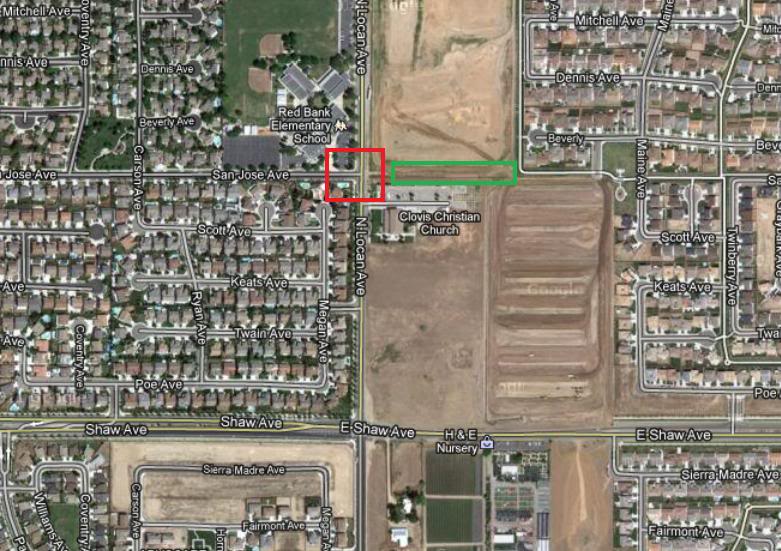 Notice went up that Locan Ave north of Shaw will be closed next week for construction of a crosswalk. Why does a crosswalk require a week long road closure? It’s because the crosswalk (from what was shown a year ago) will be similar to the one half a mile south, which has lights embedded in the road. Those lights begin flashing when a pedestrian starts to cross. I would have liked to see a raised crosswalk as well, but as far as I know, that doesn’t exist in Clovis at all, and isn’t part of their toolbox.

The crossing will connect a brand new trail connection to an elementary school. The trail was built on land donated by a church, and paid for by a nearby housing developer who was allowed to fund this trail because they didn’t want to fund a trail through their own property (thus decreasing lot sizes). Because the connection is certainly important, the city agreed to that. I also agree it was a decent compromise.

Beginning Monday, 4/2/12, through Monday, 4/9/12, Locan Avenue will be closed just south of San Jose Avenue (between Barstow & Shaw). Detours will be in place to route traffic around the area during this construction of the pedestrian trail crossing for Tract 5970.

If done properly, the crosswalk will include curb extensions, lights in the street, and a new overhead street light. Also there would be appropriate signs.

I can’t find a single piece of documentation online, but I’ll be sure to take pictures of the construction.

Here’s the location. Red is the crossing, green is the trail that was recently paved. The trail is so recent it is just concrete, there has been no landscaping or lighting done. The parcel north of the trail is a water hole, and will always look ugly like that. To the right of the church is the development that funded the trail. the school is easy to identify.

I am not sure if they will make the crossing north or south of the road. North makes sense for the school, as it’s one less street crossing for the kids. Of course, both north and south are legal crosswalks. In an ideal world, the city would build both. Scratch that, in an ideal world, the entire intersection would be a raised crosswalk, with pavers instead of asphalt.

In green, what I would like to see (full curb extensions on all sides). In red, what will likely be built. In a week we’ll see if my pessimism was accurate.

The area also needs more streetlights, but that probably won’t happen either. I believe the law states that the intersection needs only one light.

Here is a crosswalk a mile south, at another trail.

You can see the lights in the pavement.

That’s probably what we’ll get.

Good? Absolutely. But could be better. Even in a residential+ school zone area, it’s easy to hit 50mph. I see it all the time.

—-
As stated previously, my east coast weekend begins tomorrow. My flight is in 5 hours, oh joy. See you soon Newark!