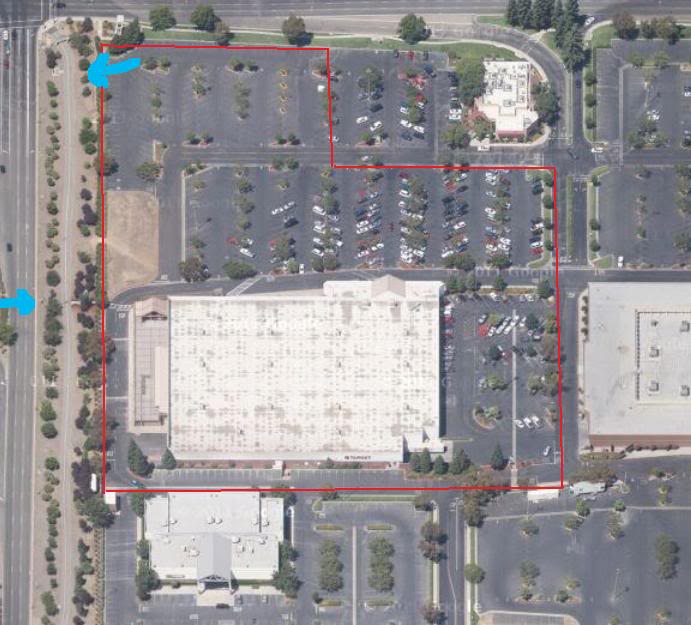 The good news is, my bike was not stolen. The bad news is, a couple emerged from Target to find one of their bikes was stolen, a bike apparently valued at $1,300. Naturally, Target management couldn’t do anything, as they’re not liable for what happens in the parking lot. The problem is, their bike parking facilities made it all too easy for the thief to cut the locks and get away, and the lack of security cameras means the police will have nothing to work with (the couple was going to file a report).

Remember the experiment I did a couple of months ago? I emailed a few big companies to see what they would do, if anything, when I sent them feedback about a lack of bike parking at their stores.

The result was somewhat comical. Instead of getting a response on the bike racks, I got rejected for two jobs I never applied for. So lovely. And after being told by Lowe’s four different times that I would get a call in the next 24 hours, the call never came. Three months later, the store same in the same bike-rackless condition they were back then.

But I trudge on, and off I go, sending a letter to Target. Let’s see if I reply.

The gist is as follows:

Like every other Target, the one at Sierra Vista Mall in Clovis has lots and lots of parking spots, spots that are never used because there are too many. In the following image, note the spots on the top left. I’d place good money on it being that those spots haven’t been used in the 20, or however many years Target has been there. As indicated by the red box, Target has a whole lot of spots it shares with no one else, never mind spaces below Target that haven’t been used in years since a small movie theater closed.

Note the blue arrows? That just so happens to be the Fresno-Clovis rail trail, the one and only bike trail that crosses the cities. Target is actually on the bike “highway”. They’ve even built a connection to the path, so people can actually get to Target (bottom blue arrow). The connection itself has a cute gazebo, although if anyone is sitting on the bench you can’t really ride by because it’s so narrow that you’ll probably hit them….but at least the connection exists.

So Target is on the bike path. There’s a connection. They have a huge collection of unused parking spots and lots of land to spare.

So how do they accommodate the customers who arrive by bike? Well, there’s a rack. A single rack that holds just 4 bikes, but at least there’s something.

(Clearly space is at a premium!)

Unfortunately, the rack has some serious issues, issues which facilitated the theft of I started this post with.

You see, Target can claim as much as they want that they’re not liable for theft in the parking lot. Fair enough, that’s standard retail-legal stuff. The problem is, while they’re not liable for the theft, there are certainly many steps they can take to minimize theft, simply by building parking facilities that make sense. Doesn’t it make sense to make the Target shopping experience as safe and comfortable as possible?

The points to providing safe bike parking are simple.

For one, the current rack suck. It’s not just that it only holds a grand total of 4 bikes, compared to a parking lot that probably holds 400 cars, but the design is poor. Target installed the wave rack, the rack that was designed by someone who clearly never tried to lock a bike to a rack.

If you’ve ever seen one, you’ve seen this

The wave rack lacks support for bikes, because they’re set up the wrong way.

What does this have to do with security at Target? Well, besides causing very expensive bikes to topple over and being damaged, the design means there’s only one point to lock up a bike. A proper rack should be long parallel to the bike, to provide both support and multiple locking points.

Nothing fancy. Just this.

Aside from the design of the rack itself making it harder for customers to safely secure their bikes….

Enough space for four bikes is no where near enough. Having enough parking spots is important because if the rack is full, a customer is left with a dilemma. Do they leave their bike unattended, or do they simply not shop? When I was leaving Target, and I witnessed the aftermath of the theft, a lady was looking on. She had just arrived on her bike and saw that someone else’s was just stolen. On top of that, there was no room for her bike to park as the four spaces were taken. Luckily, I was leaving so she had a place to lock up.

Racks are not expensive. A single rack can last for years and years, and can be the difference between retaining or losing a customer.

Out of sight, out of mind. The racks at Target aren’t terribly place (it could be so much worse), but they’re not well placed either.

Can you find them?

They’re close to the front door, but hiding to the side, meaning a thief is able to work without being seen. Target is a busy store, and this person was able to cut through cables and steal the bike without being stopped. If the racks had been installed in a more visible area, it may not have happened.

When the manager came out to assist the couple, I asked him if there were cameras. There were, he said….pointing at the parking lot. Not a single camera was pointed at the bike racks, as clearly Target does not feel those vehicles are worth monitoring. It says a lot about the store design that not only did they feel it proper to hide the racks off to the side, but they also didn’t bother to provide any form of security. While camera can’t prevent theft, they can assist in the aftermath, just as they do in looking over the cars.

I will be sending a letter to Target expressing my concerns about their parking facilities, obviously in a much more concise form.

Why should Target care? Well I stopped by because it’s actually on my way home, and is convenient. But convenience goes out the window if my method of transportation is stolen. If I don’t feel comfortable leaving my bike outside Target for 10 minutes, I simply won’t shop there. I’m sure the couple who lost a bike feel the same way, as does the lady that took my “spot” on the rack. Honestly, if Target does not improve the rack situation, I can’t see myself stopping there after work in the future.

Target may not bother to notice, but many people do stop by on bike, probably because of the convenient location. The rack is usually full, as was my experience at 9:20pm last night, when Google drove by (as seen in the image above), and the other times I’ve been there.

If Target cares about providing a positive, safe experience for ALL their customers, then they should take parking lot security seriously.

I hope they do respond, and that the response is more substantial than another job rejection.

One Reply to “Corporate Experiment Part 3: Stolen bike at Target”