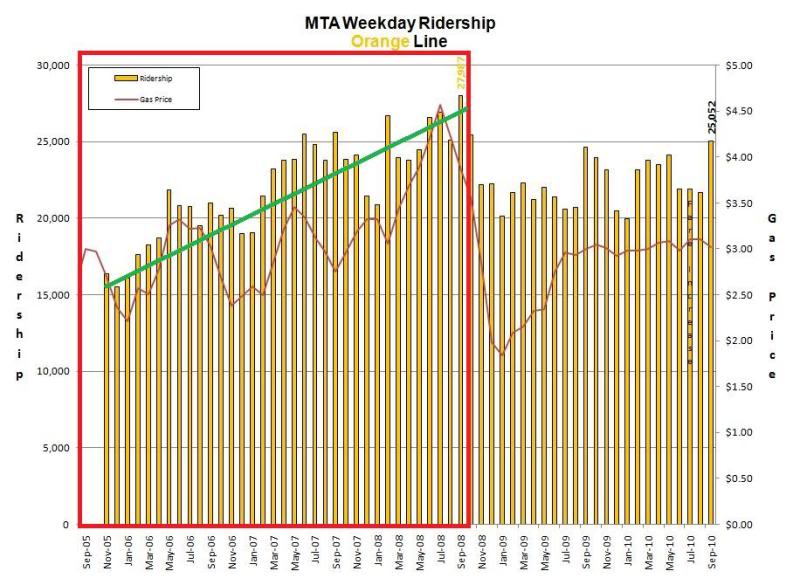 I know I said any time spent discussing the Reason article proclaiming terrible Expo Light Rail ridership is time wasted, and yet here I am, typing away. They’ve gone out of their way to link to me, so I might as well point out a couple more problems I have with their critique of the Expo line. But then no more, I’ve got too much of a backlog of stuff I’ve been wanting to talk about.

Here is their response to my previous post on the subject, which Streetsblog picked up on.

The too-early-to-judge complaint is one you hear all the time about rail, but curiously never about cars, movies, burgers, condominiums, software, new fashion lines, tech gadgets, or pretty much any other product that is brought to market. For all the palaver about “soft launches,” “slow rollouts” and the like, your opening sales figure is almost always a good indicator of how you’re going to do over the Long Tail. That’s why they call it the “Long Tail” and not the “Long Trunk” or the “Long Opposable Thumb.”

Well, no actually, that’s simply false, and quite obviously doesn’t make much sense.

If one was to build a new apartment complex, suburban subdivision, retail center or anything like that, one does not expect 100% occupancy rate on opening day. Is having 100% occupancy on day one a good thing? Sort of. One problem with having full occupancy is that it means you left money on the table. If you built 100 apartments, and all were pre-leased….you probably would have been better off building 110. And just because your brand new mall is fully leased out on day one, and the customers come rushing in, doesn’t mean it will be sustained.

So yeah, you’d be foolish to make claims about generally anything when the product is less than a week old…and isn’t even finished yet.

There’s nothing curious about having very different expectations for movies, fashion lines and gadgets when it comes to popularity lifetimes. Those are usually front-loaded because they “expire” rather quickly. If your gadget is drawing crickets on day one, it’s more of an issue because you only have a 6 month window before some other gadget comes and blows you away. For movies, that window can be as little as a week. But why on earth would you compare movies to a long-term infrastructure project? Such a random and useless comparison.

A better comparison would be with airports and highways. If you build a new airport or highway, and it reaches capacity during week one, then something went terribly wrong with your planning because you’ve now got to spend money to expand it.

That leads to something extremely important to mention that Reason simply ignores. They try and claim that a launch is a launch, but the terminus of the line is not open. The terminus is home to a massive parking garage* and will be the connecting point to many bus lines. But it’s still under construction, along with one other station. That’s a pretty big deal, and ignoring it speaks volume to the storyline being pushed here. Reason does mention two stations aren’t open yet, but the key point is “terminus” in this case, which they don’t talk about. No, not all stops are created equal.

*Not a fan of the way Metro has been so auto-focused with the expo line, but that’s a whole other conversation.

However, it’s actually the next part that bothers me the most, something repeated from the original article they posted.

L.A. County Supervisor Zev Yaroslavsky announced that actual daily ridership was a pitiful 9,000. (I have no idea where that number’s coming from. As noted in the original story, there is no visible system for ticketing. Maybe they’re reviewing security camera footage?)

There also does not appear to be any apparatus in place for preventing fare beaters from riding the train.

The author is writing about transit and yet apparently has no understanding of how the basics of ticketing and ridership counting is done by metro….and it’s not that hard a concept to research and understand.

If the author doesn’t know how ticketing is done, then it doesn’t take long to find an answer. He could check the website. He could confer with people who know the system well. He could give metro a call. He could use one of the many databases, most likely at his disposal, to find any one article written over the past couple of decades that talks about Metro ridership and ticket sales. I don’t have access to the LATImes database right now, but I’d bet a pretty penny there’s an article in there that talks about how transit ridership is counted….and I’d hope the Reason foundation does subscribe to services which allow access to that.

Why would you write an article about ridership and revenue collection, but have no understanding of how either of those are calculated? Why not do at least the most basic of research?

What I think happened here is that the author DOES know the answer, but the ignorance card plays better for the angle of the story.

For reference, here are those answers.

Actually, let me start with a tip. if Reason will continue to ride Expo to count riders….don’t buy single use tickets. The day pass is only $5.

Ticket collection on expo is via a proof of payment (not honor system) method. Every rider on the platform or train must have a ticket or pass valid for that date and time (and trip, Metro actually requires one ticket per transfer). Tickets are checked by metro staff and sheriffs, and if one lacks a ticket, they pay a steep fine, one steep enough that theoretically means it is not cost-efficient to try ones luck.

Metro of course, knows how many tickets the machines dispense and how many users have passes.

While that is a factor that goes into calculating ridership, it isn’t the only one. Yes, some people ride without paying, hoping they won’t be caught. Others have a monthly pass but only ride the green line, and may never ride the expo line. Many others transfer, so they take multiple vehicles using a single pass. So to calculate total ridership, metro uses standard methods employed by every transit system around the country.

One of those methods is a low tech as the way in which Reason made their estimates….guys with clickers. Unlike Reason, however, they are more experienced at counting accurately. More importantly, transit systems have decades of data to help them turn those counts into reliable projections. They’ve fine-tuned multipliers and such which help them reach more accurate counts. Like political polls, you need a good sample size and a proper understanding of patterns to get to your estimated total.

And while clickers are the low-tech method, most transit systems have installed automatic counters in their trains. These passive systems sit over, or next to doors and log how many people go in and out. There’s no need for someone to count people, technology is so magical that they’ve developed a way to do that (it’s quite simple). Besides being cost-effective, it’s also pretty accurate.

And again, not every car or door needs to have it because a proper understanding of stats lets one turn the sample size into useable and mostly accurate data.

If Reason wanted to, they could look into how metro currently gets to their ridership numbers.

There are certainly many more points that can be discussed in the article, but there’s just one more I will hit on

Finally, if we just need to wait for ridership to grow, what time frame are we talking about?

I think it’s fair to say that less than a week is not enough. Neither is a month. A year is a good place to start.

People don’t make commuting decisions on the fly. Commutes are based on a whole lot of variables, and take time to modify. Yes, some people (9,000 you could say) were waiting for the chance to jump on Expo. But for every one of those, there’s someone that wanted to ride Expo when it was scheduled to open in 2010 but ended up buying a car. And once you make a large capital expenditure like that, it’s hard to not use it. They might stay a car commuter for another month, or another year, or until they leave LA and are replaced by someone who sees an opportunity to save money by not making that purchase. There’s always turnover when it comes to housing, and the commuting modes and directions will always be shifting.

There are also people who may be interested in the train but either don’t know it exists or aren’t aware it was opened yet. That shouldn’t be a surprise either, after countless delays it’s easy to lose track.

Others have opportunity opened up by the line. If one lives by a station and is unemployed, the opening means access to a huge number of jobs. They may not ride now, but if they get a job downtown in July, that’s when they’ll become a rider.

Finally, USC is a big anchor for the line, and they just closed up for the semester. Expect ridership to see a big boost come September.

Reason throws in a very misleading chart on Gold line ridership to try and claim ridership is actually steady. It’s one hell of a Y-axis they use. The chart I used is much clearer in showing the timeline between opening a line and ridership growing before reaching a plateau.

Here’s an other example, thanks again to Rubbertoe at the Transit Coalition. This one shows the Orange Line bus system.

But wait, then ridership dropped! Pay very special attention to both the dates and the gas price line. September-November 2008….oh right, when the economy blew up. Yeah, ridership dropped, as did ridership on almost every transit line and highway in America. Even with the crap economy, ridership never went lower than what it was in the first six months of service, even with a fare hike!

That graph ends in 2010, but ridership has returned to the 2008 high, and will exceed the previous record this summer, meaning the line is still growing.

Expect to see another jump, and then 2 years of increases when the extension opens this summer (on time and under budget).

Mind you, this is just LA. We can also show the same in Phoenix, Norfolk, Trenton, and many other cities that opened transit lines in the past decade.

So, Reason, if you must try and bash the Expo line’s ridership, give it at the very least six months, but even that would be poor form due to seasonal variances. A year is a good place to start, but still will be inaccurate. We can talk in two years, as that will give an actual basis to make an informed observation.

And please remember we’re talking about a rail line built to transport people for 100 years, not a summer blockbuster people won’t remember past September.