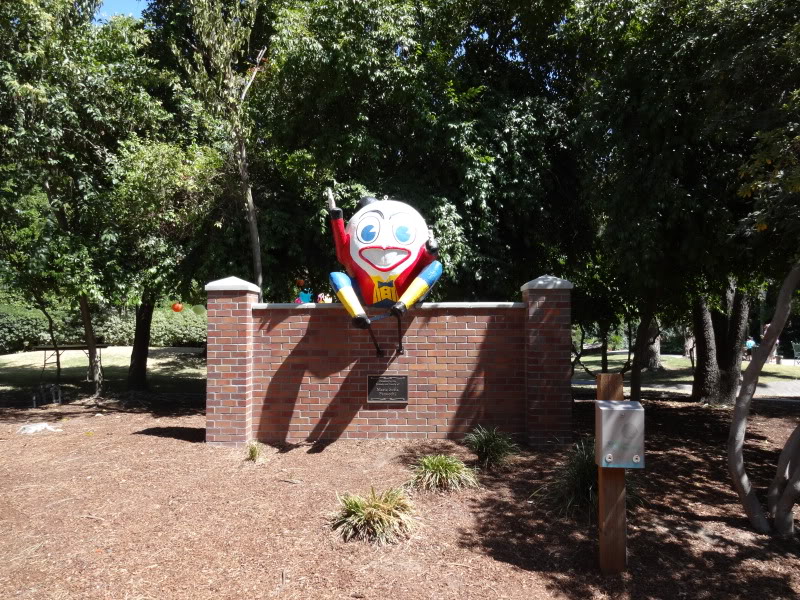 If you’re a resident of Fresno county, you’ve surely heard of Storyland and Playland inside Roeding Park. Intended for (small) children, they have been a part of the valley for 50 years. Besides hearing about them, you’ve probably gone to visit them as well. Storyland is a walk-through park, with fairytale stories set up. Playland is a miniature carnival. If everyone knows it, why has it been allowed to get into such bad shape?

I visited them this past weekend for the first time, using tickets given for free as part of a Grizzlies baseball package.

It’s not exactly what I expected.

Storyland is a walk-through park of Mother Goose stories and nursery rhymes, including favorites like Jack and Jill, Goldilocks & the Three Bears, The Three Little Pigs, Peter Pan, Hansel & Gretel, King Arthur & the Knights of the Round Table, Alice in Wonderland, Noah’s Ark, Humpty Dumpty, and more!

Yes, it’s small. That was expected. Yes, it’s pretty much for those 6 and under. Also expected. I didn’t go to immerse myself in stories, just to see what it looks like in person.

The problem is, the condition everything was in. It appeared as if the last bit of maintenance was conducted shortly after the park opened. And what’s odd, is that it certainly isn’t cheap.

$5 to park, then $5 per adult to get in….and then $4 for a “key” so you can listen to all five stories? Never mind the fact that the place is still somewhat popular, and was filled with people having birthdays. They most certainly don’t have a lack of revenue, and yet even the most basic of maintenance seemed to be lacking. In most other cities, something like Storyland would be free, just because it’s so simple. Maybe then the lack of maintenance would at least be understandable. In this case, where is the money going?

Even the “point” of Storyland, the stories, were in bad shape. Each story has a sign with a basic summary of the fairytale….and yet the signs look like they haven’t been touched up since 1965. Each story also has a box where you turn a key to get the tale read to you. I saw one family disappointed when one of the boxes didn’t even work. $4 well spent on the key. I heard one story being read, and the audio sounded like it was coming from a gramophone.

Some attractions had glass windows you had to look through, like to see an owl house, or into the pigs brick house. The glass was caked in about 50 years of grime and it was impossible to look inside. I saw a poor little boy running up to the window excited to peer into the house. He would come away with dirt on his hands, but nothing else, as the inside may as well have been empty.

There were some basic playground attractions, which were fun in that they were built in an earlier time, so the slide was actually fast, there was a seesaw (does any playground in Fresno still have those?) and one of those spinning things. That was fine, but some of the more elaborate equipment just didn’t seem too attractive for kids.

As one yelp review put it:

Just took my two year old to Storyland and was incredibly disappointed. We are zoo members and love it. We were expecting the same kind of quality. It was terrible. Everything was really dirty, we were walking through cobwebs, and there was no way I was letting my daughter crawl through some of the things, especially the pirate ship. Who knows what kinds of spiders were in there. Many of the slides were in pretty bad shape, and one was covered in tree sap. The standing, stagnant water was really nice too. The whole thing was just kind of haphazard and dated. I was really mad about spending $8.50 on that. Would have been better off going to the zoo and having a corndog! Don’t waste your money!!

That reminds me of other features, the water ones. The Storyland river? Dried up. The story wells? Stagnant, probably ready to give birth to a thousand mosquito. The fountain? Dry.

Oh wow. It’s essentially a city dump with water. You pay to rent a paddle boat to cruise through plastic cups, food wrappers and so much more. How does the staff become so indifferent that they let the garbage mount like that in what’s supposed to be one of their center attractions?

I took some pictures, but I didn’t have the heart to shoot at all the sad parts of the parks.

I understand funds are hard to come by, but it gets much harder if the park is set up as to scare away any return visits. If the fountain is too expensive to maintain, fine, leave it dry, but at least throw away the garbage.

Some pictures of the day, as I said, I focused on the positive. Due note the condition of the sign in the fourth picture though, they were all in that condition.

One of the story boxes is visible on the right. All the stories are simple like this, not exactly expensive to maintain.

Colorful, but lots of paint chipping off

Probably the only shot of “clean” water

Onto Playland, note the sign. You don’t want to look into the well.

Maintenence should probably be done in winter, when the park is closed, no?

Ok, I lied, not much garbage in this shot.

Outside the parks, people ride horses in what the zoo intends to pave over for parking

One Reply to “How is Storyland in such bad shape?”