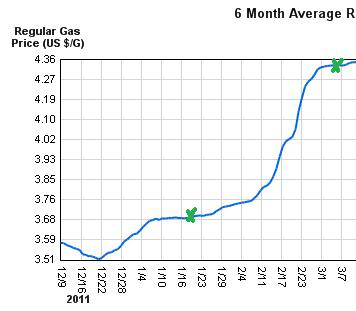 Back in January, I made a prediction that gas prices would easily top records this summer.

Not exactly, no. This year was an odd one for gas prices. Usually gas follows a pretty standard path, as it rises early in the year to reach summer highs, then falls for the rest of the year.

Things were different this time. Gas prices spiked early, and then actually fell as we got closer to memorial day.

The reason, is the the US economic growth disappointed, and worries in Europe kept oil prices low. Indeed, oil is under $85 today. Combined with a lack of “fear disasters” to spike up prices, oil valuations are actually being rational.

(By “fear disaster” I mean things like turmoil in Libya, or an oil spill, which affect prices more by fear than by loss of supply).

Here were my predictions with the actual results. (All prices California average from gasbuddy.com)

$4.00 by March 4th.
Actual: $4.33 Prices spiked very early this year. I picked an interesting random date, near the top…

$4.25 by March 25th
Actual: $4.33 Not far off on this guess, but sort of by accident. Another lucky choice in date, as prices are about to fall quickly. The economic news started to hit, the big recovery wasn’t happening. This we haven’t seen before, an odd pause in pricing and then a fall….

$4.50 by April 25th.
Actual: $4.17 Again, another lucky date….gas prices fell quickly, and this was almost bottom. I of course assumed prices would follow the regular path and keep increasing gradually until memorial day. That was very wrong.

$4.66 (record) by May 15.
(prices to drop after May 15)
Actual: $4.35 I was way off on the price, but I nailed the date. That was the very high point. The price drop that came after was another surprise though, usually its more gradual.

So I’m not so good as estimating prices, but I do get lucky with dates.

So what’s coming next? It’s even harder to tell. Traditionally, prices will hold for the next month and then begin their decent until they bottom out in December/January again.

The problem is, oil is being emotional again, as investors use the slimy liquid to express their feelings. I can see a $10 jump in the price of a barrel in a single day with something as simple as good news out of Greece (more than tying Poland I mean). The opposite is just as true, oil may very well go under $80.

The odds of seeing any records this year are poor though, short of a real disaster (ie, Saudi Arabia going into civil war). Next year? Well, that’s a different story, one that should clear up after October.

Oh, and one last thing….I still think transit systems will report many ridership records this summer. The US jobs report may not be good enough for investors, but it has been constantly growing, which equals more people commuting. Wall Street may freak out at “60,000 jobs added” because for them it’s low….but that’s 60,000 potential new transit customers.