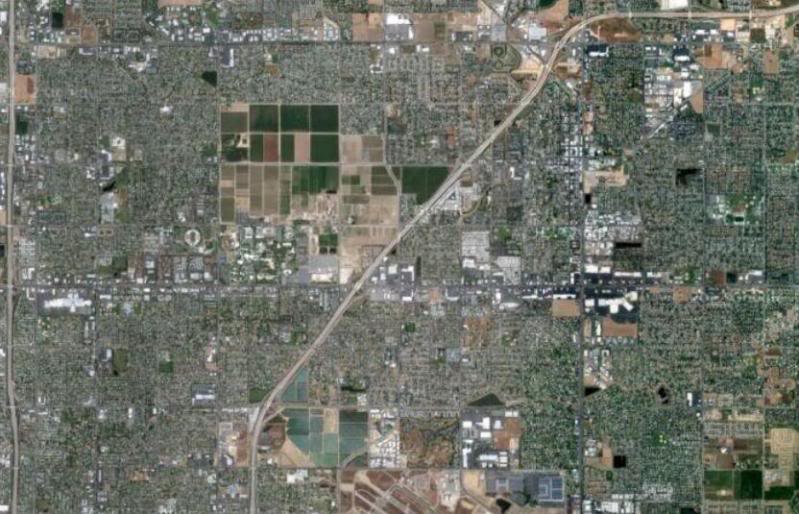 Recently I noted how LA expanded the hours of their subway system to run past 2am on weekends. The city of LA already ran 24 hour bus service. I think it’s fair to say that LA is reasonably meeting the needs of its community.

Staff has analyzed the recommendation for the regional fixed-route transit services operated by FAX for FY 12-1 3 and have concluded that maintaining the same hours for service as FY 11-12 would reasonably meet the needs of the community.

What kind of community is done with its weekend by 3:30pm?

Clovis has its own very small and very inefficient transit system. That transit system (round up) runs small buses in odd meandering routes around the city. Fresno has FAX, which is a transit system which runs real (full size) buses along many major avenues.

Because apparently nobody lives in one city and works in another city, or ever crosses city lines to shop, dine or meet with friend, the transit systems are generally confined to the city borders.

Can you spot the city border? Nope, it’s not the freeway.

Clovis pays FAX to run route 9 (two buses an hour) an entire two miles into Clovis, to serve Shaw Ave. Shaw is one of the commercial cores of the city, and a subject of revitalziation efforts.

In the map you can see bus 9 running into Clovis, on the left is the turnback the bus takes during hours where Clovis doesn’t hand over money (left green arrow).

The bus terminates at Sierra Vista Mall, where it meets up with the Clovis buses. Sierra Vista Mall is home to Sears, Target, Kohl’s, a movie theater, and many typical mall shops like Victorias Secret, New York and Co, Gamestop etc.

Also between the city border and the mall are a whole bunch of your typical big box stores, like WalMart, Home Depot, Lowes, Kmart, and so forth. Not only are they popular shopping destinations, but they employ thousands and thousands of people. There are other offices, such as lawyers, salons, call centers, etc.

And apparently, those thousands of shoppers and thousands of employees pack up and head home at 3pm on weekends. At least according to the city staff, who thinks that ending bus service at 3pm meets anyone’s needs.

So how much does a years worth of poor bus service cost?

Not exactly breaking the bank here.

To put that a different way, Clovis pays FAX around $27 for every run the bus makes down Shaw to the mall. (I’m assuming weekend rates are the same per run).

So how much would it cost to have the 9 end every run in Clovis?

Not a whole lot more.

The 9 currently makes 26 trips into Clovis on weekdays. First trip hits the mall at 6:40am and the last one leaves at 7:27pm.

(BTW, note how the council document seems to think service runs until 8:30pm? That’s not what the schedule says….)

Lets imagine Clovis had every trip the 9 makes run into the city. That means 29 trips on weekdays (three additional evening trips) and 24 trips on weekends (an earlier trip and then service until 7:15pm).

How much more would it cost?

At around $27 a trip, for an entire year, the city would spend an additional…..

That’s it. That would be the entire cost of a years worth of “full” FAX service in Clovis along Shaw.

I guess that’s just too much to ask for.

To put that in perspective, funding wise, a couple of weeks later the same staff decided to drop $750,000 on widening yet another road for an entire 0.3 mile stretch.

There is absolutely no traffic/congestion need to widen that road today versus waiting a decade or so. Imagine if the city took that $750,000 (which the developers gave the city) and put it in the bank….and then used the interest on that to fund the bus service expansion until that road actually “needs” to add lanes. Maybe the commerce on Shaw Ave wouldn’t be so depressed if more shoppers had access to it? And maybe unemployment would dip a little bit if people desperate for jobs had a transit option to get them to the openings?

Sadly, nothing will change, as Clovis has again signed up for another year of abysmal transit service.