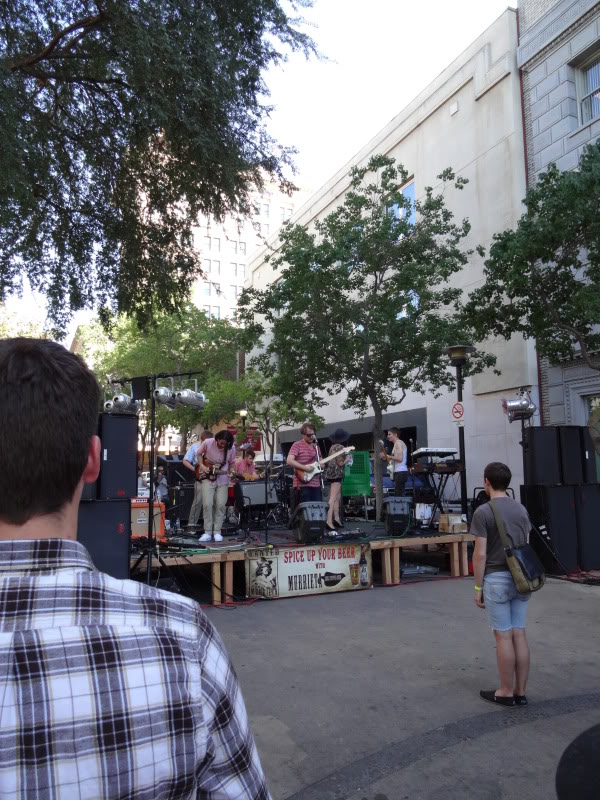 Saturday featured an entire afternoon of free music, plenty of food options and a good amount of beer on the Fulton Mall. While the Fulton Mall is home to annual events like the Cinco de Mayo festival and such, this one was a little different. It wasn’t centered around a holiday or festival, but just a local band releasing a CD and bringing along some of their friends.

I’ve been to various music-related events in Fresno, such as the Fuse Fest and really, as much free entertainment as I can find. The one theme I’ve found in common is that it doesn’t matter how free something is, there’s never a guarantee of a crowd.

This time was a little different. I don’t know what strings the promoters pulled, but this event was well attended, and the “venue” (The Fulton Mall from Merced to Fresno streets) was the perfect size.

The fun began at 4pm, and while the crowd was small, it was honestly more than I expected.

I could run with this picture….

But in reality, there were plenty just too scared to stand up close.

This picture gives a better idea of the early crowd, and also some of the decoration.

The furniture and “roof” were a really great touch. The “venue” was unique, in that this is the one and only place in the entire city where an outdoor event like this can be hosted and feel like it’s sort of indoors. The buildings provide the walls, and the trees and shadows provide a comfortable roof. The amenities of a pedestrian mall really make the space feel more intimate, and the Fulton Mall is quite possible the one and only street in the entire city with a solid street-wall – no gaps caused by the city’s zeal to knock down anything vacant and replace it with parking.

The “back” end of the street was home to the food and drinks. Food was provided by three food trucks and two existing restaurants. Beer was provided by Fresno Brewing Company (the coffeeshop/bar on the mall) and also a beer garden tent. Something I hadn’t seen before was that the beer could be consumed anywhere…..not sure if that was by design or just lax enforcement of codes. The lack of a “beer cage” did make things more flexible for patrons.

There was a bit of strong sun early on, but the buildings and trees provided great shade. The “canyon” effect of the road provide for natural breeze, which was helped by the industrial fans brought in by the promoters.

The music was non-stop.

The many features of the mall provided for comfortable seating and activity areas. The playground, while in poor condition, was popular among the many small children (at least after the photo was taken).

There were some other form of entertainment, like this acrobatic show

And also a bike valet

The Fulton Mall is famous for the fountains, but it looks like this week more were dry than empty. They provided great seating, but perhaps would have been better enjoyed in their working state. I recall this one working recently, right?

Between acts, we decided to take a walk to other parts of the mall, and it was quite the contrast. Fresno street, with its traffic and stop light created quite the barrier between the loud and popular music area….and everything else. While the three open restaurants by the music were doing good business, absolutely everything south of Fresno St was closed by 6pm.

At least one fountain was open for business.

Not in the best condition, but it made even a desolate mall seem more alive.

Few people were around

But at least they had a pleasant walk to the music. If the mayor gets her way and returns traffic to the mall, the one working fountain would have to be removed, as there’s no way to fit two lanes of traffic around it.

I told you it was crowded.

Could something like this bring crowds to the mall every week? Of course not, but it does help dispel the myth that even with things to do, people would avoid the mall due to parking, crime, the homeless, etc etc.

Speaking of, I didn’t see a single police officer the entire time we were there. Not one. And yet it felt safer than an afternoon at Fashion Fair. And naturally, parking was free and plentiful, as it almost always is downtown….both for bikes and cars. And the homeless? They were there, enjoying the music from afar.

Could anyone imagine a single other street in Fresno capable of hosting an event like this so successfully? I can’t. And if the mayor has her way, and the trees, fountains and playgrounds are replaced with asphalt and parking meters, this same street wouldn’t be able to continue having events like this.

8 Replies to “Review of The Catacomb Party on Fulton Mall”