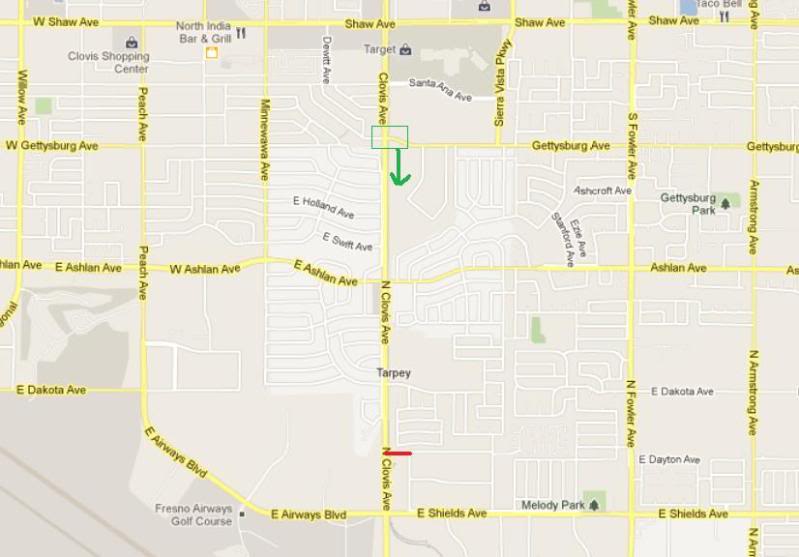 Both Fresno and Clovis are proud of the trail, at least officially, as they bring it up often as something good about the towns. Problem is, funding doesn’t exactly follow.

I will have a series of posts showing the trail in its entirety, starting south of Shaw, in Clovis.

This section of the trail is not very popular, as I will show that is probably due to how isolated it is (very few “entrances” onto the trail). The trail is attractive and usable, but has some major (MAJOR) ADA violations, which also inconvenience cyclists. Mostly, this portion of the trail is a series of missed opportunities. Speaking of, one thing you won’t notice in the pictures is the complete lack of lighting.

Many of the problems would be cheap to fix. Even adding lighting would probably cost less than yet another project to widen a road for half a mile.

Here is the first part, I started at Gettysburg (green box) and headed south.

The trail is off to the side of Clovis Ave, a major north/south road that acts as a freeway with 6 lanes and 50mph speed limits. Even with the traffic, the trail is pleasant.

One thing to note is that the lack of lighting on both the trail and the highway means trail users are blinded at night with oncoming traffic. That’s not something the pictures show, but something to keep in mind.

As I headed south, one problem immediately apparent is that the only access to the trail is at intersections every .5 mile apart. There are multiple roads on the west side, but no crosswalks are provided.

There are two canals that cross the trail, and would make for great trails to link people in, but nothing has been done to make them useful.

Ample space on each bank for a trail.

Trail is in green, canals which could have potential feeders in blue

There are multiple example of access points that haven’t been taken advantage of. Crosswalks, as defined by the law, exist, and pedestrians, according to the law, have the same protection as a marked one (vehicles required to stop).

But without any marking of any kind, try getting 6 lanes of 50mph traffic to stop for you.

And then deal with the fact that no curb ramps have been provided, making these crosswalks unusable to disabled users, and difficult for cyclists.

To top it all off, the west side of Clovis has no sidewalk, so if the residents in these homes want to use the trail, they;re out of luck. The city wants people to cross only at signalized intersections, but then provides no means to reach those intersections.

On the image of the trail, just above this, can you spot the only signalized intersection in the distance?

We reach another canal, again, another missed opportunity. No crossing here either. Nice bridge though. We finally approach an intersection.

There is a bus stop provided, at an odd place, not close to the signal at all. And remember, no sidewalk on the other side.

Trail users, naturally, want to go straight, but the city forces us to veer off to the side.

I want to go straight, not diagonally into the intersection

The placement of the button doesn’t help. And even though Clovis gets lengthy green cycles, the pedestrian signal MUST be pushed to activate the walking man. To cross Clovis, that would be understandable, but if the cycle will give Clovis 2 minutes of green, why not automatically show the pedestrian walking signal?

Riders must ride into oncoming traffic to make the left turn onto the crosswalk that should have been straight in front of them.

Meanwhile, to cross Clovis (not the direction I’m going) note that the crosswalk is mostly blocked anyway.

A button is provided in the median, but impossible to reach for a disabled user.

So we continue south and cross Ashlan….

Note the incorrect placement of the button. You must stand in the street, in oncoming traffic, to push it. Impossible for wheelchair users, and a blind pedestrian would never find it.

On my northbound trip, another cyclist came across this and couldn’t find the button. So when Clovis got green, we continued to get the red angry hand. Naturally, we ignored it.

The intersection has a Mcdonalds, but trail users are not invited to dine.

There is a nice rest stop though.

The only building in this section of the trail that has a curb cut crossing the trail. Nice building though.

The cut across the trail is the most minor of inconveniences, as users continue straight.

What used to be six dangerous bollards is now only one.

The bus stop is right by two lovely unmarked crosswalks….

With pedestrian access somewhat blocked, absolutely no signage and no lighting.

It’s “only” a seven minute voyage to cross the street. Note that google is confused because there are no sidewalks on the other side.

Naturally, pedestrians want to use the crosswalks which the state law dictates exist here.

While the crossing is another huge fail, at least the building provides a connection to the trail.

We also spot one of our first trail amenities, a trash can and doggy bags.

Other amenities include signs for the trees. Nice touch, but very, very small.

As we reach our next intersection, we find an even bigger crosswalk failure.

ADA was passed in 1990, and this trail was not built until much later. I’m shocked there haven’t been lawsuits. At least most of the dangerous trail-blocking bollards have died.

The curb ramp is “modern” but it directs bikes and wheelchairs straight into 50mph+ traffic. This picture was taken while riding straight on my bike, I need to swerve left and then right to not get stuck on the curb.

The other side is only marginally better, still not ADA appropriate.

When you’re at this intersection, there is absolutely no indication that the trail suddenly ends between here and the next light .5 miles away. That is, if you’re going south, you probably want to cross here. Instead, the city expects you to make a quarter mile walk/ride to the dead end and then figure out what to do.

Can you see the dead end?

And the trail is over.

Naturally, for many users, the journey is not over, and we see a desire path, This was a rail-trail, so naturally we find the rail part.

The tracks are still “active” (used for storage) so the trail can’t continue yet, but there is more than enough room for a sidewalk.

One could also build a crosswalk.

But no, trail users must fend for themselves.

As stated at the beginning, the biggest problems are the missed opportunities, mostly because city officials see the trail as a jogging track instead of a place for serious transportation. It’s ok to dead-end a jogging path, and provide limit access. It’s not ok for the one and only bike highway.

On the plus side, the asphalt was smooth, and the path was mostly clean. Yes, there were a couple of pot holes and the occasional discarded food container, but no one expects perfection. Usability is what matters, and this section of the trail isn’t very usable.

Next post will focus on going north of Gettysburg into old town Clovis and then beyond.