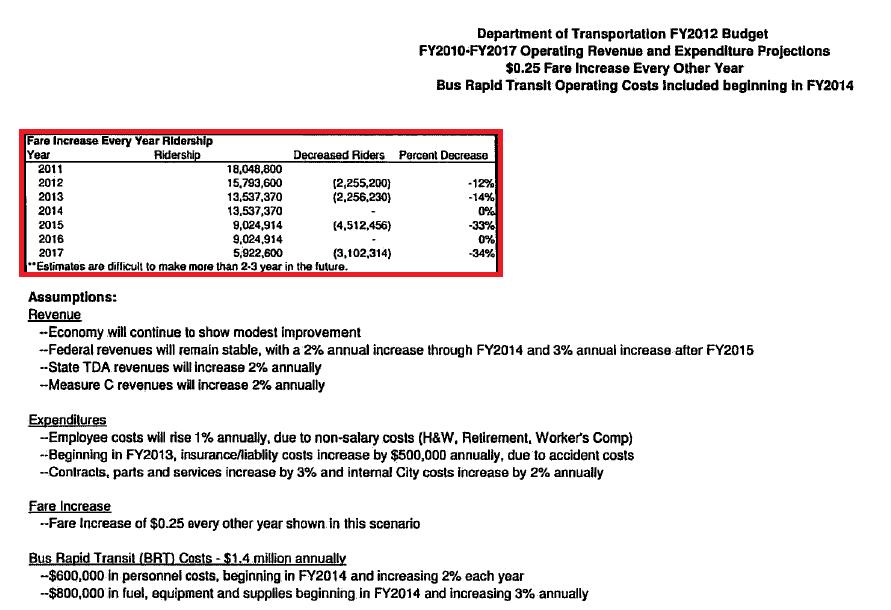 One of their first recommendations is a series of fare hikes, including one this year of an additional 25 cents, and raising the base fare to $2.00 by 2017. That would mean a complete doubling of the fare in just six years, and this is in spite of the fact that the last service expansion was over a decade ago. Indeed, over the past decade, as the city population has ballooned and unemployment has spiked (currently still over 14% in Fresno), four routes were actually eliminated and no new service has been introduced. Probably not the best way to connect people with jobs.

The report essentially states that without fare increases, FAX is screwed. That would be true , if there was no other funding source….such as, I don’t know, the City Council sending more money that way. The Council certainly has no issue spending large sums of money on road expansion, such as the current $55 million project to add new ramps on 180 to “ease merging”. My heart goes out to all those who must merge every day. Incidentally, $55 million is more than the total annual budget for FAX.

So what do fare hikes mean to riders, besides the report promise of continued existence of the transit system? Apparently, the elimination of riders.

I mean, are they really suggesting that the fare hikes would mean going from 18 million riders a year….to 5 million? And that’s….a good thing? Perhaps someone leaving a comment could share some light on this math and/or policy. It’s 2am, so I’m going to hope I’m the one that isn’t reading right.

The report also talks about making FAX the “transportation of first choice” which presumably, means making the system actually usable to most people. Currently, for example, weekday service terminates at 9pm, and weekend service is done by 7pm. One of the recommendations is 20 minute frequency, which in most cities is considered pretty poor. Generally, 12 minutes is the most people will tolerate for “frequent” service, anything beyond that requires extensive planning.

Other suggestions include common sense items like better bus stops (such as benches and shelters) and the novel idea of providing schedule information at all times. Believe it or not, but currently routes and schedules are only posted at the transfer center….and only during business hours. If you don’t have internet access, best of luck to you.

Naturally, funding sources are not identified.

There is also a proposal for night service, intended to correct the current issue of service ending so early. However, the plan is absurd enough it warrants its own post.

This information comes from the PDF report