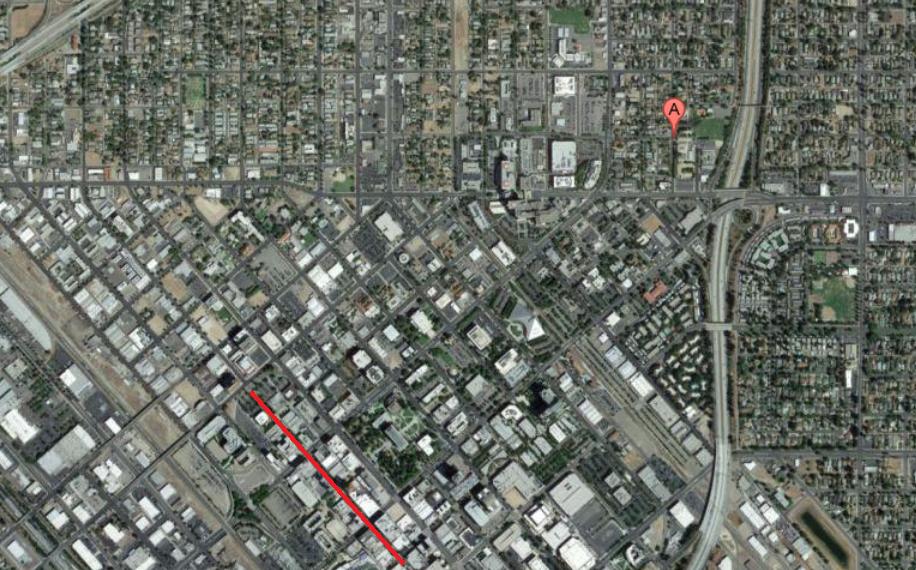 The mayor has been pushing for years to rip the whole thing up and turn it into yet another two way street with parking – ie, every other road in the city. She’s asking the feds for millions of dollars to get the bulldozers going, claiming that it will start revitalization downtown, even though she ignores that every other street is open to cars, and not one is doing economically better than Fulton.

Naturally, they brought in an “expert” to claim that the best course of action is indeed removal. At least according to George Hostetter of The Fresno Bee, who’s been running a series of hit pieces on the mall for years.

In a recent blog entry, George recalls a quote from when the mall was being built which he uses to emphasize something that he feels the pedestrian mall took away – the life of downtown

“’Dragging the main’ on Fulton will be no longer for the youth of our
city. I dragged it for the last time this morning with a little bit of
heartache. But those heartaches have to go. We have a new city to build,
one not only economically sound but one which will be esthetically one
of the greatest cities in the western United States.”

Ah yes, the days where the gang piled into the car after school to cruise down the strip, seeing and being seen, and then pulling into the drive-in for a shake.


If only Fulton Mall were a street again, those glory days would come back! I can see it now….the stay-at-home moms rushing into Gottschalks for the latest sale, JC Pennys across the street putting up their elaborate window displays, the court workers enjoying their three martini lunch at the Downtown Club…..

Except what George may not realize is that people don’t do that any more. Outside of the foothills and the mountain, people generally don’t drive around “window shopping” from their convertible for pleasure. Imagine this: If the mayor announced Shaw was to be closed for good tomorrow, you could interview 1,000 people and find 1,000 of them complaining about the closure making their trip longer – not one of them will lament the loss of being able to slowly cruise down the street, eh, drag. And unlike Shaw, Fulton isn’t exactly a vital corridor for vehicle traffic. As much as it may pain him, returning the Fulton Mall to look like Fulton Street of 1963 won’t bring any of those cherished memories back to life.

The department stores are gone for good. The 58-store Gottschalks chain based in Fresno didn’t go out of business in 2009 because of the Fulton Mall. JCPennys isn’t suffering nationwide because of the mall either, and adding cars won’t get them rushing back.


Does it seem absurd that I would suggest George somewhat hopes for this? It’s not if you look at the way he apparently blames ALL of downtown’s troubles on the mall. Of a recent walk he says

I came to a run-down apartment complex on the corner of Mariposa and
Illinois Street. Next to the apartments was an empty field. It was about
35 feet wide and perhaps 80 feet long. Tiny. This is the infill
development opportunity that the 2035 General Plan update figures to
make irresistible to private-sector developers.

There was a for-sale sign in front of the field. Contact Terri Drewes at Guarantee Real Estate Services if you’re interested. She’s one of many stuck cleaning up after Gruen and Contini.

The “mess” he’s referring to is the mall.

He is seriously suggesting that this small parcel clear across downtown is vacant due to the pedestrian mall. Suddenly, blaming the failure of Gottschalks on the mall doesn’t seem so far off.

The rest of his extensively large blog post is mostly devoted to how wonderful Van Ness Ave USED to be, before the pedestrian mall parallel to it was built, along with a massive underground parking garage.

If you’re not convinced that Mr. Hostetter is out of touch, consider this….

(referring to the 50 year old photo)

There’s a good view of the sidewalk on the west side of Van Ness. It
looks wide, clean and uncluttered. No trees, no one pushing shopping
carts. The sidewalk is inviting.

Just how inviting were the Van Ness sidewalks in the past?

It’s a glorified high speed parking lot. That is what he considers inviting. That is what he dreams that Fulton Mall could look like. Incidentally, not much has changed on Van Ness from the above image, except the park grew a little and bus stops replaced parking. Most of the cars were sent underground.

Just as an aside, what does George apparently think of Fax?

There I saw two huge FAX bus stations. Almost all of the east side of
Van Ness from Tulare to Fresno Street is one vast bus stop. Except for
the Vets Day Parade, no one walks along that stretch of Van Ness.

Truly baffling. He’s talking about THE central hub for the Fresno bus system, where almost every line lays over, providing multiple transfer opportunities. Thousands of bus passengers walk there every single day…..and yet he claims that no one walks there? It’s a shame that George considers those bus riders as nobodies.

I suggest reading the entirety of his blog post, and maybe you’ll come to the same conclusion I did:

George Hostetter is someone who yearns for the sleek and shiny “autopia” of the 1950’s, complaining that the pedestrian mall (and underground garages) of the 1960’s destroyed downtown. But it’s 2013…..the 1960 plans may not be perfect, but going back to what existed in the 1950’s isn’t going to fix that.

So, Fresno Bee, why is this guy writing all your Fulton Mall articles?

Going back to the breakfast itself, compare how George’s article contrasts with those of other local news sources who aren’t vested in blowing up the mall.

Here is what thebusinessjournal.com had to say about the guest speaker

The
keynote speaker was Henry Beer, a resident of Boulder, Colo. and a
member of the design team for the Pearl Street Mall, a four block
pedestrian mall that has a number of locally-owned and operated
businesses and restaurants and is a popular destination for tourists
visiting Boulder.

Check the rest of the article, not a word in it about adding cars.

Swearengin lauded the Downtown Fresno Partnership for their efforts
to revitalize the area and backed the newly launched “I Believe in
Downtown” campaign Tuesday morning at the annual State of Downtown
breakfast.

Again, check the tiny article….not a word about destroying the Fulton Mall, just talk about the successes of the years events.

ABC did dig into the idea of removing the mall

And how about the Fresno Bee?

There’s no doubt in the mind of noted urban architect Henry Beer about what Fresno’s Fulton corridor needs — cars.

Fresno
needs to look Fulton between Tuolumne and Inyo streets “straight in the
eye,” Beer said Tuesday morning at the annual State of Downtown
breakfast. That six-block stretch is now a nearly 50-year-old pedestrian
mall. It generates a fraction of its economic potential

Lead with the annual successes? Nope.

Amazing how preconceived notions about what should be done can vastly influence the kind of article that comes out!

There is one bit of giant irony that none of the articles mentioned…..

The speaker who flew in to call for destruction of the Fulton Mall?

The firm he founded has their offices…..

……..on the enormously successful Pearl Street Pedestrian Mall in downtown Boulder. You know, just the very same mall his company designed and has been attracting people for over 40 years.

The speaker claims there’s one thing that is a recipe for success:

Really? Because looking almost directly outside of his office, at the start of the pedestrian mall, you know what I see?

Dozens of bikes, including a successful B-cycle bikeshare station.

5 Replies to “Destroy pedestrian mall so drivers can cruise?”