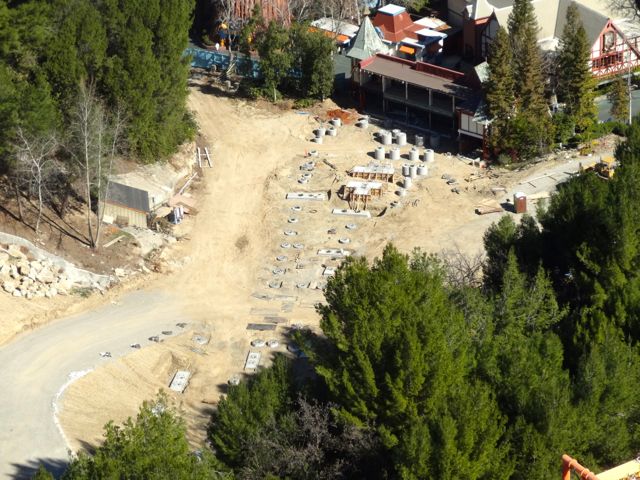 Phase 2 to Santa Monica now has almost-completed bridges, well graded sections of dirt, and even the first foray of construction deep into downtown Santa Monica. But even though the first track is scheduled to be dropped off this summer, the line isn’t going to open to passengers until 2016, if all goes well…..and these things never go well.

I’ve also been anxiously awaiting the new Green Line extension in Boston. In the works for well over a decade now, the MBTA still hasn’t actually managed to move a single shovel, and that line won’t be open until 2017, at best.

While Expo Phase 2 broke ground about a year ago, Six Flags didn’t begin their work until about last August. The coaster was announced over the summer, and was probably in the works internally for maybe a year before that.

Even though no vertical construction has begun, and they haven’t even started work on the station, four months from now, the worlds tallest loop will be in place, and the ride will be running. Four months, by the way, is about as long as Expo phase 1 spent in the “pre-revenue testing” phase, where trains would run back and forth without passengers over a fully completed rail line. Six Flags will run about a week of tests, before beginning revenue service – and after about a decade, I’d wager the safety record of Full Throttle will be superior to that of the Expo line.

Now obviously, most of this is in jest, but wouldn’t it be nice if our transit rail systems were built like coasters? The reason coaster construction is so fast is because once the concrete foundations are in place, the track is essentially snapped together like legos. You can see the giant pieces of metal waiting to be assembled. I wonder if this kind of modular construction could be implemented in parts in the transit world? These rides are designed for the long-haul, 40+ years, just like transit systems.

But more importantly, wouldn’t it be nice if the safety rules are reformed?  Expo had to “test” for three months prior to opening, and the FRA requires a lengthy testing timeline for each individual vehicle, if those are bought new (LA used existing trails). It sort of seems like overkill, doesn’t it, especially when you compare to an extreme coaster operated by 18 year old part-time workers that can start and complete all testing in about a week, and then run without incidence.

One (less extreme) roller coaster has been running safely since 1902 – or about as long as the MBTA rail system.  Maybe it’s time we let Premire or Bollinger bid for transit projects.

One Reply to “If light rail was built like roller coasters….”