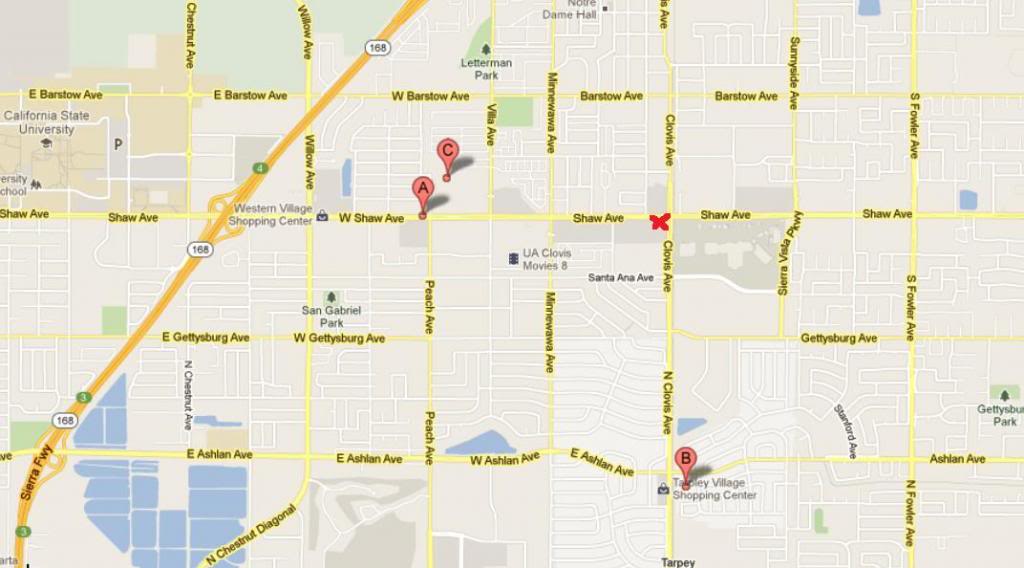 Not content with having opened two new locations in Clovis in the past couple of years, and rebuilding the other two, Mcdonalds will be adding yet another location to the fine city.

The location will naturally be open 24/7, have dual drive-thrus, and operate in one of the most visible intersections of the city.

The new location will be at Shaw and Clovis, across from the Sierra Vista mall and the Fresno-Clovis bike trail.

New location is x, existing Mcdonalds in the immediate vicinity marked as well.  A and C are the Mcdonalds outside the Wal-mart and the Mcdonalds inside the wal-mart, a theme that you find at every regional wal-mart. B is a mile away on Ashlan and Clovis and was completely rebuilt last year.

Naturally, the drive-thru is what will front both Shaw AND Clovis, completely killing pedestrian interaction for the next decade or more.

And the great irony? The approval of the Mcdonalds appears in the same planning agenda as a report on the ongoing efforts to revitalize Shaw. The uncomfortable irony is that the city has held many meetings with residents asking them what they like and dislike about Shaw, and what keeps them away from businesses.

Guess what the people say?

Too many cars. The sidewalks suck. The lighting is poor. No bike lanes.

So what does this project do to improve that?

“The project will help the Shaw Avenue corridor continue to revitalize along with other new developments in the area.”

That’s right folks, by blessing Shaw (and Clovis) Avenues with the beauty of a double drive-thru lane, the project helps in revitalization. Who knew that revitalization was so easy?

The beautiful view from Clovis Ave – the city’s main street.

Just blank walls and another dead corner. Naturally, the entrance of Mcdonalds faces the parking lot, not the street. And the sidewalk? An amazing 4 feet wide – the bare minimum. Try and walk side-by-side on one of those. I guess it was too hard to find room for pedestrians with all the car infrastructure.

In green, the lovely pedestrian access. Remember, the regional bike and pedestrian trail is just across the street.

Mind you, it doesn’t have to be that way. Fresno is home to a single pedestrian-friendly Mcdonalds, a model that clearly is no longer in corporate favor. Note that while the design looks old, the store itself was completely rebuilt from the ground up last decade. I believe the style was chosen because this was the location of the first Mcdonalds in Fresno, which was one of the earliest expansions for the chain. The design allows for ample parking and a drive-thru, without killing the pedestrian experience from the sidewalk.

It’s not just Mcdonalds. Other chains that rely on their drive-thrus are able to build a model that at least acknowledges the pedestrian and doesn’t completely destroy a corner.

It isn’t beautiful, but its leagues better.

That one is also in Fresno though. I can’t find a single example of a pedestrian-friendly fast food place in Clovis. Less than a mile away from the new McDonalds, this Burger King features the same “screw you” design for pedestrians.

Nothing quite says “welcome, dine here!” like a wall. I’m sorry, were you expecting a sidewalk? But isn’t the landscaping just beautiful? Makes it seem like a real nice neighborhood.

I find it somewhat alarming that Clovis is becoming worse than Fresno when it comes to auto-dominated ugly fast-food restaurants. That sort of became obvious when they approved this design for Clovis Ave in old town….the city’s prized historic and only pedestrian area. This was built in the past 2 years.

I think I’ll have a post about the “Clovis Way of Life” soon, because it’s become readily apparent that the unique character of the city is long gone. While Fresno has actually made steps towards fixing the errors of the past, Clovis is making the same mistakes Fresno made a decade or two ago, and once the shine of the new stucco is baked off by the summer sun, some may find the city as appealing as its neighbor.

One Reply to “Just what Clovis needs, another Mcdonalds”