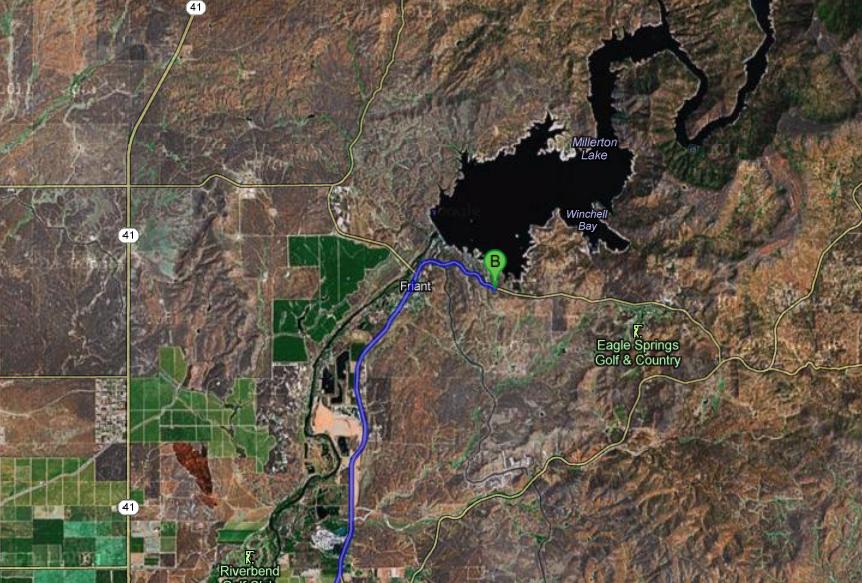 Last week, the Fresno City Council voted to support a proposal for a new medical college. The problem is, the proposed campus isn’t actually in Fresno, or even really near it – it’s 20 miles away from downtown, in an area currently used for farming and recreation.

Granville, the housing development company behind the medical college, owns large tracts of land by the lake, and wants to use it to build thousands and thousands of new suburban homes. They plan on using the medical university as an anchor, and what I see as bait to get public opinion to support the plan.

Many in the community have naturally been outraged. The area is home to beautiful natural scenery, and thousands of new cookie-cutter homes will destroy that. Worse, the area will be 100% auto-dependent. There are no services, stores, or jobs there. Meaning every time a home is built, multiple car trips will be added as people drive 10-25 miles to get to jobs in Fresno. Of course, the area already has some of the worst air pollution in the country, and this will just make things much worse.

Putting the medical campus there is even worse than just adding homes. The idea of mixed use is that one can live near where they work. The problem is, this kind of development won’t encourage it. The students who will be attending class aren’t about to buy some $400,000 McMansion so they can walk to class. No, they will be living in a $600 a month apartment in Fresno, and be forced to drive 20 miles roundtrip every day just to attend class. Perhaps some of the faculty may move up there, but most will already be established in Fresno. And the minimum wage staff? They’ll be coming from furthest away, and they’re the ones who will less be able to afford spending $10 a day just in gas to commute.

Transit? Please. Of course there’s no transit there, nor is there any plans for it. Bike accessibility? Technically, yes, but the distance is much too far for the casual user – and it’s all uphill.

That, by the way, makes the project very exclusionary. Can’t drive?  No medical education or potential job for you. Too broke to drive? Sorry, try applying for a job at Mcdonalds. Oh wait, bus service ends at 9:30pm, good luck getting off your late shift….

Instead of saying “this is madness” that Fresno City Council went out of their way to endorse the campus.

That’s right, the representatives of the people of Fresno went out of their way to endorse building homes and jobs 10-20 miles outside of Fresno and their districts.

How does that make sense? They were elected to represent the people of Fresno, but instead, they trip over themselves in a rush to represent a developer that is actively working to move taxpayers and job-generators out of town.

“We don’t get to tell them where to locate,” Brandau said prior to the council’s 6-0 vote in favor of the resolution.
Fresno Bee

So instead of working to have them build in town, you vote to have them build elsewhere? Note that this is the same company that Fresno lavishes with financial incentives, including evicting businesses and knocking over buildings to give the developer a park. How do they thank the city? By building their next big thing elsewhere.

I’m a huge proponent of regional government, and not running things based on arbitrary lines, but the system we have now is one where the city council deal with matters of the city, and the county supervisors deal with matters of the county. This project is a raw deal for the people of Fresno, the ones who these council members are supposed to represent. Some have argued that they should support the college because it will be a regional benefit – but that’s not their job.

Take Lee Brand, he represents the district closest to the proposed college (a mere 10 miles away). His district will bare the brunt of negative consequences.

For one, there’s one, and only one real road between Fresno and the college (and the proposed homes). It just so happens that this one road is also the main arterial his constituents take when they drive to the shops or their jobs. Anyone who lives in that district knows that Friant and the entrance to 41 backs up every morning, even though they keep widening it. When you filter everyone to one, and only one on-ramp, that’s what happens.

All in the backyard of Lee Brand’s constituents. But he voted yes.

So why is this thing being built in the middle of nowhere?

According to the company:


The Assemis, whose several downtown projects have made them the
city’s biggest partner in restoring the area, said they tried for more
than a year to find a Fresno location for the school.

But that’s a lie.

Here you can see the blue line leaving from downtown towards the proposed campus. It keeps going north.

The two red x marks are enormous properties this very same company owns, much closer to downtown. Nothing was big enough?

This enormous site (from California to Whitesbridge, between Hughes and Marks)  is right by a brand new highway, a commuter airport, and minutes from downtown.

It’s also just north of the veternas home. Two years ago, I wrote about how these veterans were being sent out to nowhere. The home was finished and opened, and it’s still nowhere….but wouldn’t a medical campus benefit them? Sort of makes sense to have medical students be near potential patients, don’t you think? And the addition of the school would make bus transit feasible – something that won’t ever happen at the proposed site by the lake.

It’s not downtown, but it sure is better.

Believe it or not, but the same company owns another enormous parcel within the Fresno city limits. Isolated, but a huge improvement over the lake.

So what was that about no land being available? They plan on turning this thing into homes around artificial lakes. Yup, in an area where lack of water is always on peoples mind, they want to build fake lakes.

I marked another location on the map, which is Fancher Creek, a planned development that has been in the works for well over a decade, and is still dirt.

Of course, these sites work to fulfill their dreams of single-story campus sprawl.

What about being efficient and actually building up?

In the above map, I noted two purple crosses…..existing multi-story hospitals that are essentially abandoned. Sort of makes sense to re-use a hospital as a medical school don’t you think?

Problem is, the goal isn’t really to build a medical school that is convenient. The goal is to justify thousands of new home in the beautiful open land. People tend to be against that, even here. But once you throw in “medical school” who can say no?

Apparently, not even the city council. They voted yes on a project that will bring in zero taxes, but cost money in the form of road “improvements”, congestion and noise. In other words, the council voted to represent the developer, and only the developer. The people who actually get to vote? Who cares, it’s not like we have money.

One Reply to “Who do the city councilors represent?”