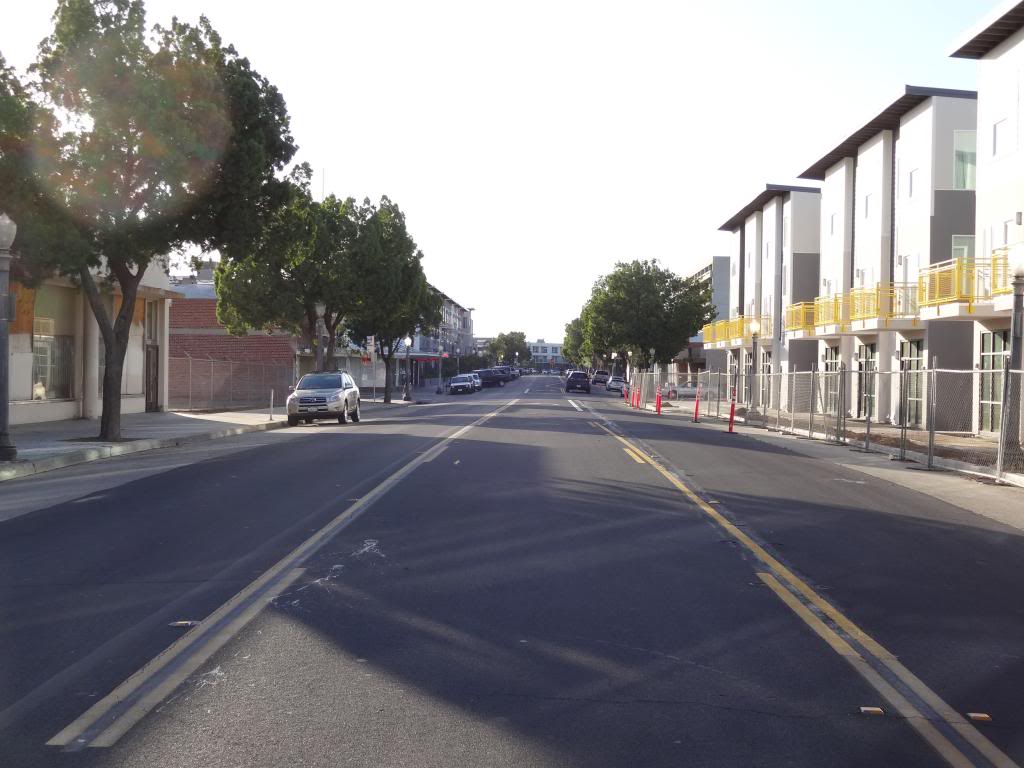 While I didn’t attend the opening ceremony, I did drop by a week or so before hand to take pictures, so here they are. By the way, to the GV Urban employed gentleman that oh so subtly followed me in his car during my entire visit….creeping people out is not the proper way to get people to sign leases with you.

As the buildings weren’t open yet, I don’t have interior pictures, but you can see some at their facebook page.

1612 Fulton is essentially a clone of Fulton Village a block away, so much so that a local architect has complained that work he did on the village project was reused without permission or payment. I was initially concerned that GV urban was doing the same thing they do in the suburbs, where the drop the same exact model in over and over again.

Fortunately, the slight aesthetic changes made to the exterior were enough so that the project doesn’t look like a clone. Paint goes a long way.

1612 on right, Fulton Village a block away on the left

The project is directly next to another GV urban building, where they rent out office/artist space.

One concern I have about the project is the width of the sidewalks. The area is one the city supposedly wants to make walkable, and the company supposedly wants residents to walk to the nearby art galleries and commercial spaces they rent out. Sadly, instead of dedicating more space to sidewalks, they’ve made changes to narrow them. The end result is that it’s difficult to walk side-by side with someone. Not impossible or anything, just narrow so that you bump elbows enough to be awkward – remember, the added trees lessen your horizontal space.

The use of green space isn’t a problem – it’s great to filter rainwater. However, they should have moved their buildings back to allow a better sidewalk.

It’s also clear the pedestrian experience plays no part in their plans. Even a week before opening, when all the construction was done, short of minor landscaping, the sidewalk remained closed, as it had been for about a year. There is no reason to block off a sidewalk for such a long period of time.

Incidentally, you can notice the lack of traffic in the area. All pictures taken on a weekday afternoon. The developer also supports the city plan to destroy the Fulton Mall and allow cars to drive by. As these pictures show, having asphalt doesn’t mean hoards of shoppers will descend on your street.

Like their other projects, the building is actually not one, but many buildings separated by small spaces. This allows more windows and more privacy than from a typical apartment block. I believe this pathway was fenced off after I took these images.

Walkway to interior units, parking. They put up a fence limiting access to residents, as they’ve done in all their other projects.

You can notice again the narrow sidewalk. I am a fan of the balconies overhanging the front though.

GV Urban doesn’t ever want to raise a finger to improve infrastructure. Sadly, these dreadfully ugly streetlights were kept. Worst still, the poor design means the new residents will get bright lights shining directly into their bedrooms, while the street below stays in relative darkness. Fortunately for them, it appears the glass hasn’t been cleaned in decades, so the light shining in shouldn’t be TOO bright.

The sidewalk does expand at the corner, where I believe it’s a live/work apartment

Fortunately they built two curb ramps. Not aligned for the blind, but an improvement.

As we leave Fulton, and turn the corner….tragedy. Ok, that’s a strong word, but this is NOT something that should ever be built in a downtown area.

The entrance to the interior parking

And driveways. This section of street used to have a dozen mature trees too.

Earlier I mentioned that the sidewalk should never be closed for such a long period. It sends entire families out into the street. No temporary crosswalks were ever built. Luckily, traffic is non-existent. Note the alley on the immediate left.

But what’s even worse, is that they made the sidewalk the absolute minimum width legally allowed.

This image shows the existing sidewalk, and then the area they left. The section on the left, in red, is not passable due to tree planting. The area on the right, in yellow, is sloped for car access. That’s clearer in the second picture.

I guarantee residents will park in “their driveway” and block the meager sidewalk.

What’s worse is that this didn’t have to happen. The company insisted it was the only way to fit in the amount of units they needed to make the project worthwhile.

False. They could have had the same amount of units, if only they’d used the alley which is right there. Instead, they walled it off. Remember how I said GV Urban doesn’t spend money on infrastructure? Heavens forbid they pave a small section of the alley to use as an entrance…

What they could have built, same amount of units and parking, but use of alley. A wider sidewalk, too.

Instead, here’s the alley

The alley is in bad condition. For most projects, the city requires developers to chip in to improve existing infrastructure. Not in this case.

These access points will never be used of course. probably just for fire safety reasons.

Looking the opposite way

Around the next corner, these units have lovely views of nothing

And back to where we started.

So is the project good for downtown? Yes, it’s great to see more residential, but with each project, GV urban seems to be getting lazier and greedier. Iron Bird was fantastic. Fulton Village was a step down, and now 1612, with the driveway section, was a big mistake. The front is fine, but again, no art like Iron Bird, sidewalks that are too narrow, and poor lighting.

Meanwhile, as a bonus, here are the buildings across the street that will be demolished to give the developer a park. Unlike the retail space at Fulton Village, these actually have tenants.

Hope you enjoyed the tour.