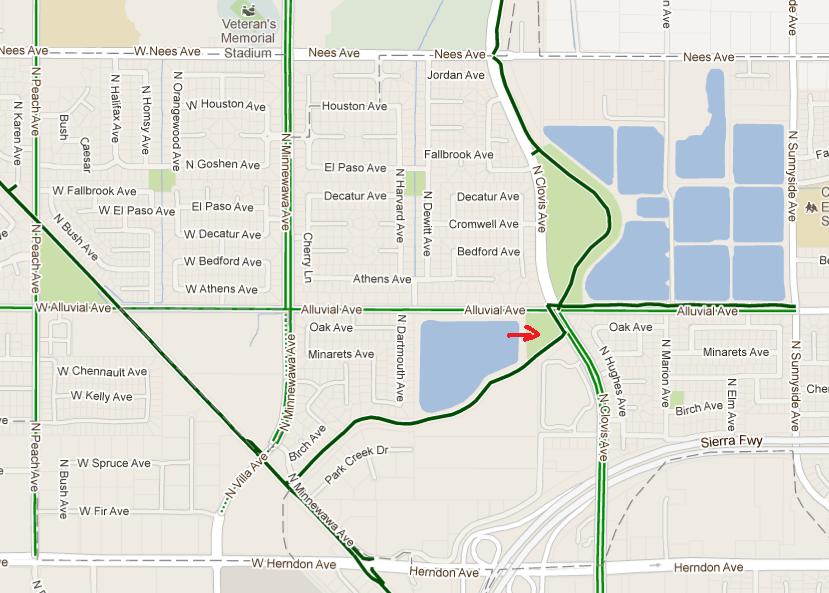 I guessed that a path would be built diagonally across the park, to the intersection. I was right.
Let’s start where the old trail was (at the bottom right of the water pong in the image above). You can see the existing trail was asphalt, and the new one is concrete. The new trail curves left, the old trail remains and continues straight/right.  Also note the light: the old trail had no lighting. Note that lighting was only added to the new section.

But one massive problem: No improvements to the intersection. The shortest, and most logical, crossing is straight. But in Clovis, automobiles get full priority, so anyone using the trail must make two long crossings, essentially making crossing the road a 3-5 minute exercise. Even though the trail is active, if the button isn’t pushed, the pedestrian signals dont indicate one can cross.
The ramp also sends people straight into the intersection, dangerous for the blind. It was very exciting to see that construction happened so quickly, and it was of high quality. Lights, concrete, and amenities make it obvious someone is taking this trail seriously….for recreation anyway. The unimproved crossing and curves make it obvious that those in charge still don’t see this as a transportation option, which it is.
Now, why can’t they fix the old town gap? As far as gaps go, that one is much more serious.