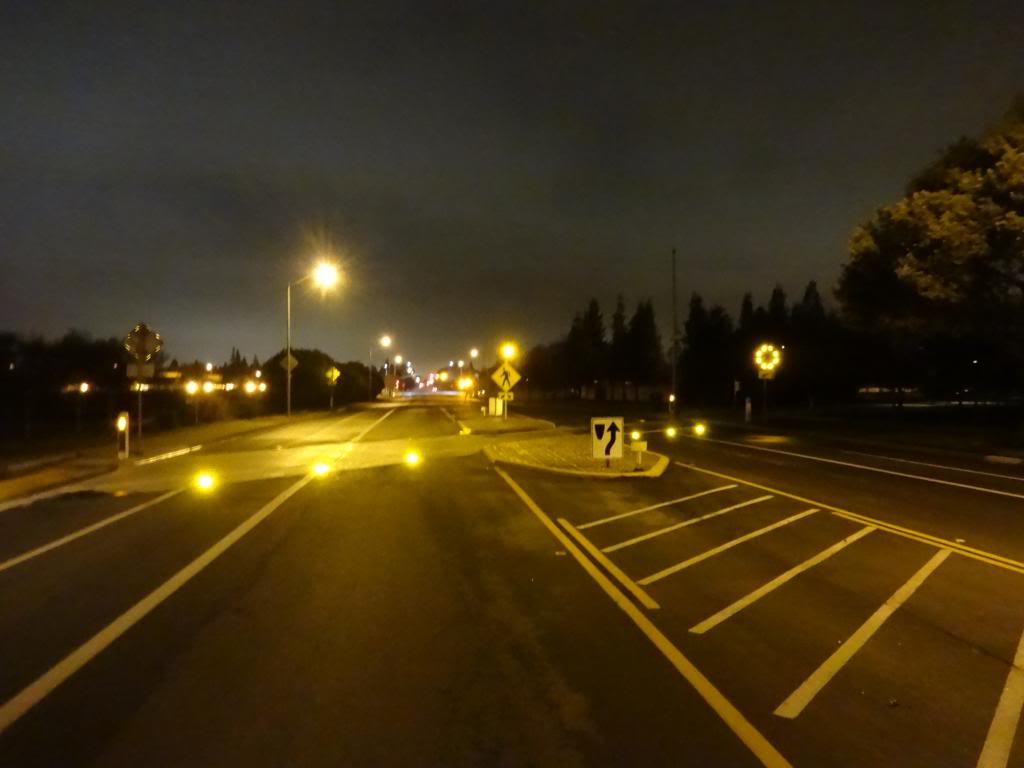 What takes longer to build, a half mile of road widening, or a crosswalk? If you’re in Clovis….

During April of last year, I documented the construction of a new enhanced crosswalk in Clovis, connecting a small trail system, with an elementary school. The area is residential, except for the large church adjacent to the crosswalk.

This crosswalk was special, because it was to be the type with flashing lights embedded in the concrete. Pedestrians were to push a button to turn on those lights, and also a series of flashing signs placed before the crosswalk.

This is an example across town, although this one is fancier because the system detects pedestrians automatically, and there’s a center median. You can see the lights in the pavement, and one of two flashing signs (in each direction) on the far right.

Actually on the left, you can see three diamond signs. Two of those are flashing.

Sure enough, the road reopened to vehicle traffic, the crosswalk signs were put up, but the button to turn on the flashing lights was still covered.

Weeks passed, and then months. It seemed as if the city was waiting until the school year started to turn the crossing on.

But then it became fall, and then winter, and the crosswalk was still “off”.

So in January, I emailed the city, asking if they’d forgotten about it. At the end of the month, I got this reply:

The system was not working (wiring issues) and the pavement lights were
not visible to traffic at a safe stopping distance.  The developer told
us that the wiring issues were repaired about two weeks but we still
need the developer to address the visibility issues before the system
can be activated.

An additional 5 months have passed, and wouldn’t you know it, but the crosswalk still isn’t working.

In the same time period, entire subdivisions have been built, $200,000 traffic lights have been installed, and roads widened. But it appears that turning on a flashing crosswalk system is an insurmountable challenge.

Mind you, the excuse makes little sense. If the wiring problems were resolved, it should be turned on. If the flashing pavement lights aren’t visible as far away as they should be, so what? Is it not still safer than no light at all? The area is poorly lit, how is a pedestrian supposed to fare any better without any lighting system at all?

Remember, this crosswalk isn’t just a series flashing light in the pavement, it also includes upright signs many feet in advance of the crossing. But those signs also remain dormant while the system is off. It seems improbable that NONE of the signs are visible at a safe stopping distance. Remember, we’re talking about a two lane road, in a residential area, between a school and a church, not the interstate freeway. One does not need half a mile to stop.

The city did find time to install this sign, one which makes no sense (again, pardon the poor quality).

Not pictured, just a few feet back, a yield sign.

Problem is, that’s not the law. The law says vehicles stop at crosswalks to let pedestrians pass. And stop signs don’t actually mean anything for pedestrians – they’re signs whose only purpose is to direct vehicles, of which naturally pedestrians aren’t. So all this sign does is confuse the law, and give motorists who know of the sign a mistaken belief that they do not have to stop.

Clovis apparently has plenty of money to widen roads…this very same road was widened just down the block, where a traffic signal was installed. But time and money to help kids safely reach their elementary school? Apparently not.

I’ll try contacting the city again. Maybe this year, they’ll get around to it.

3 Replies to “One year later: Clovis crosswalk still not done”