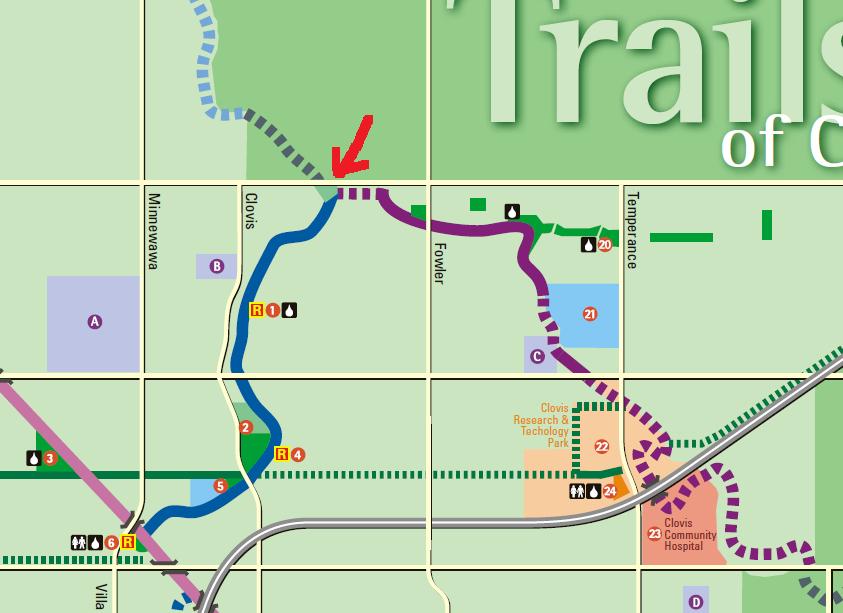 The trailhead is intended to serve as a gateway to the trail system, and works as a way to advertise the existence of the system. The plan is also to provide amenities, like tables, restrooms and water fountains. The plans also call for a small bike maintenance area, including a tire pump. As far as I know, this would be a local first.

However like most recent Clovis park projects, the area will be dominated by parking – an astonishing 40 spots. That’s a very high number for what’s being advertised as a “junction and rest area for cyclists and pedestrians”.

Like most Clovis parks, this area of asphalt will add large costs, take up a lot of space, and be greatly underused. During the comment period, almost every comment received noted a concern about the unnecessarily large size. Those complaints appear to have been ignored.

Here is the site plan. The park area looks to be well designed – hey look, trees instead of grass that nobody uses! But the parking lot takes up about a 3rd of the site. Also, there appears to be no future connection to the trail to the east. I’ve marked an arrow showing the direction to the Dry Creek Trail

Don’t expect to see this done this year. Currently, the council is approving a change in land use, which allows the plan to go forward. Hopefully it’s open by next spring.

Here is a picture tour of the area:

The trail currently ends before the dam at a junction, as seen is this map

The curve towards the left leads to a sort-of road

Looking across the canal towards the future park

Going straight at the junction. one arrives at the dam

The dam is accessible. Going straight one arrives at the future park

The canal divides the lot. There are no plans for the other side of the empty lot

However, it is accessible

One would cross this way to head towards the enterprise trail

This isn’t officially a trail – it’s a canal maintenance road.  But obviously it’s used as a trail.

A concern of mine is that there appears to be no provision for a legal crossing here.

Today, it’s a minor two lane road. But this is Clovis, so soon it will be 4-6 lanes wide.

This way to enterprise trail

I had thought I read that there were going to be improvements here, but I was wrong.

It’s very pleasant, even though it’s not officially a trail.

Eventually you reach where the real enterprise trail ends

The canal dirt path is straight, the real trail is on the left, where the lady is walking.

Returning to the project area, you can see this not-trail is being used as a vital connection, even without a safe crosswalk

The cyclist is heading to the dam, where she will enter Dry Creek trail. Again, this lot isn’t the park area, the lot across the canal is