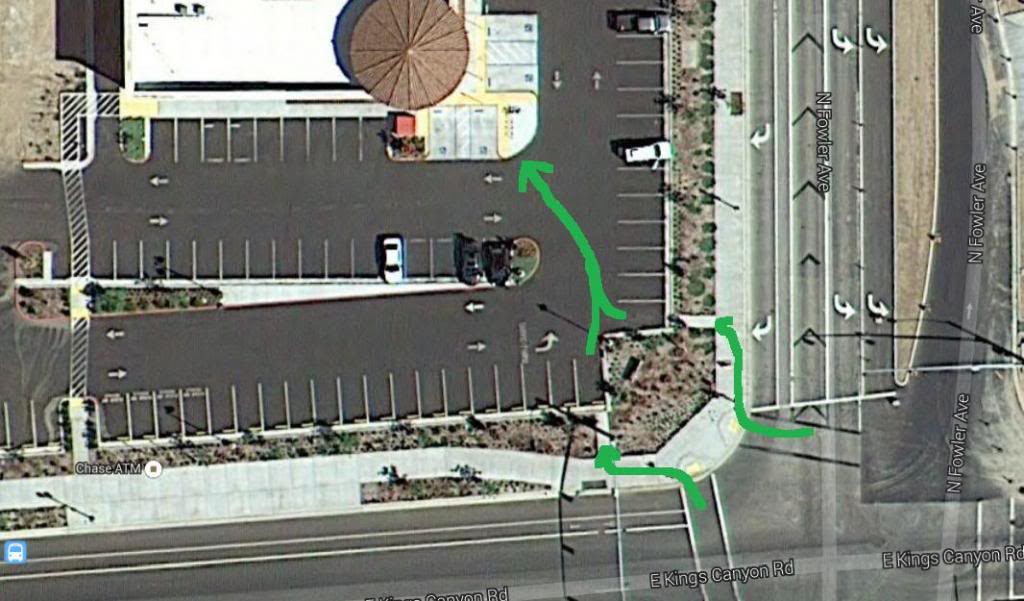 CVS listened; they replied by email, contacted me by phone, replied to my follow-up, and actually did some work on the ground to fix the problem.

CVS has recently opened a brand new location in the “Fancher Creek” development, a transit-oriented village for south Fresno in the works for over a decade, which had been stalled since the housing bubble broke. CVS’s pop up like weeds in the Central Valley, so the only reason I paid it any attention (see bottom of that post) was because the area was supposed to be under some kind of walking, biking and transit master plan. I was interested to see if CVS did ANYTHING to cater to the transit village that is supposed to pop up around them, rather then dropping in the same store they’d built at every other intersection in town.

Side note: No transit serves this transit-oriented village.

During my walking tour, I noted that this brand new development, built on perfectly flat land, on what used to be an empty lot violated the “equal access” bit of the Americans with Disabilities Act of 1990 (ADA). The law, which has affected commercial properties since 1992, has some exceptions for historic structures and the like, but obviously this brand new development wasn’t excused from compliance.

The very well defined technical stuff, such as max ramp slope, min aisle width, sign height, availability of railings, turning areas, etc etc. The kind of stuff you can go out with a ruler and note if the facility complies or does not. As you can imagine, because a hard and clear series of rules are set out, it’s easy to comply, for both companies and contractors.

Note: If you’ve seen what appears to be a perfectly fine sidewalk ramp be ripped up and replaced with what appears to be the exact same thing, it’s due to a violation of a very technical issue, such as maximum height of the lip where the asphalt meets the cement.

The second portion is very broad: it’s about equal access. This part requires more discretion, but basically, the idea is that if an able-bodied person can access a good or service, a disabled person must be accommodated in a way that provides as much equality as possible. You can’t require that people using wheelchairs use an entrance around the back, unless you’re a historic property, for example.

This is where CVS failed.

Like most CVS stores, this one is located in a busy intersection, with parking all around it, and a drive-thru in the back (so much for the transit-village).

Pedestrians can be expected to arrive from three points: Walking south on Fowler, walking east on Kings Canyon, or arriving at the intersection from any other location. The front door faces the intersection.

Anyone arriving at the intersection obviously follows the most direct path to the door.

The front door points right at the corner, and even offers (poorly designed) bike racks!

There was a problem though. Those access points nearest to the intersection were not usable by people in wheelchairs. No ramps at all.

As you can see the red path is what an able-bodied person would do. The blue path is the lengthy route anyone in a wheelchair had to take. Clearly not equal access. Now besides that fact that this store was built a full 20 years after ADA took effect, CVS, by nature of being a pharmacy, probably caters to the elderly and disabled more-so than other businesses. Add in the fact that this is a TOD area…and this is just unacceptable.

So I sent off an email in January. I got a call-back very quickly, allowing me to further explain the problem to a real person, who was very understanding.

I was then promised more action quickly:

It was a pleasure speaking with you today. As we discussed I am going to share your concerns with our field managers for review. You can expect a phone call from a member of our field management team within 5 business days to discuss this further.

I never actually got a second call, so a month later (February) I asked for an update, via email. Their reply:

Thank you for your patience with this issue. I do apologize for the delay in receiving a response from CVS. However, I did want to assure you that we are working to come up with a resolution for this situation. We have put together some options and are waiting to confirm the best one with our Field Managers. I will keep you posted in the mean time and you will receive a phone call from a member of our field management team as soon as the plan is decided.

Another month passed with no call, so I emailed them again in late March.

Thank you for your patience. I have received word that they are preparing a plan of action to make the necessary changes to the wheelchair route at this location. You should expect to see changes coming very soon.

Victory! CVS listened! Sure, no one else ever called me, but this sounds like the resolution I was looking for, so that’s excused.

2 more months went by. I visited the site and there had been no changes, so off went another email in late May:

Thank you for your patience. I will have a member of the leadership team for this store reach out to you with status of this project.
You can expect a call within 2 business days.

At this point, you shouldn’t be surprised to hear that I never got that call. I don’t quite understand the point to all these promises….

I emailed one more time after a week, because they were very specific about the two days…

Thank you for your patience. I am happy to say that I have received word that our engineers are studying the situation at this time. A plan for improvement should be on the table shortly. You will receive a call from a member of our leadership team as this information becomes available.

That’s the last I heard from them. Maybe their phones don’t work?

Two weeks ago, I swung by the site one more time, and it looks like the “plan for improvement” had not only been finalized, but they’d made physical changes.

Here is the corner. The access points were just to the left and right of the frame….

Lets enjoy a before and after

How about off to the left, another before and after…

The most convenient pedestrian access point, gone, without a trace.

They addressed the violation of “equal access” by ensuring that NO pedestrian or cyclist is welcome to the store, from the intersection. Now everyone can take an equally ridiculous detour up the street to get back to the entrance.

What looks so close…

Requires going to an access point so out of the way, a sign is needed to point it out.

To be fair, it’s not just those on foot being sent out of their way by CVS. While CVS pulls out all the stops to cater to motorists, with extensive parking, a drive-thru, and barriers to walking on top of it, those who choose to drive cleaner vehicles (in the area of the country with the worst air pollution) aren’t exactly welcome either. They’re sent to the most distance corners of the lot, spaces that I would bet will not once be used in the next decade.

The CVS pedestrian access points in green, and some of their clean vehicle parking, in yellow. And no, there aren’t any charging spots available for EV’s.

I guess the lesson is…..be careful what you wish for?