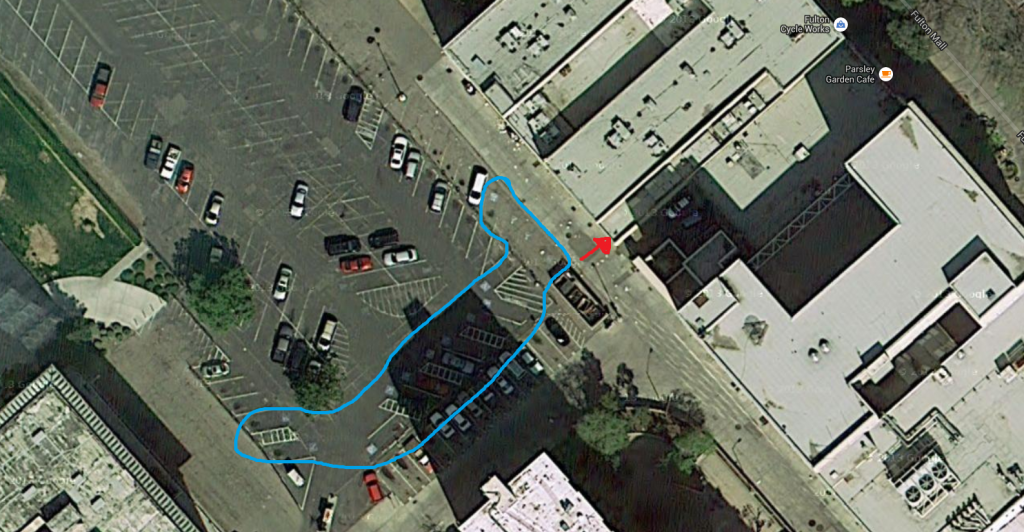 His short story was about two women who wanted to visit his restaurant. One of the women was disabled and relied on a wheelchair. Craig claims the women were unable to find any nearby street parking, and the mall made it impossible for them to access his store because it lacked direct vehicular access that the wheelchair-bound woman needed. He recommended they simply drive on the pedestrian mall and unload the wheelchair at his front door, and then the driver could park further away and walk. They did this, but stated they wouldn’t return due to the inconvenience.

He also noted the mall made receiving packages hard for the same reason.

I was in awe at the elevated level of bullshit contained in under two minutes.

For fifty years, access for vehicles to stores on the mall has not been a problem, because at the rear of every building is a vehicular alley. Packages and deliveries? No problem. Loading? No problem. It was designed that way for a reason.

The alley also provides access to ample parking – including dedicated handicap spots. Peeve’s Pub, like every other building on the mall, has entrances on both the front and back so patrons can exit where it’s most convenient to them.

There was zero need for anyone to drive on the mall. If immediate access to the door was required by the person in the wheelchair, then it was readily available on the alley side. I have frequented the location many times, and have used the rear door without issue to access the parking lot. Craig has owned the restaurant for many months, and surely is aware of the option.

In fact, Peeves has an EXTRAORDINARY amount of handicap parking within STEPS of the rear entrance.

Four or so are in the alley, and at least an additional ten are in the public parking lot. The red arrow indicates the extremely short walk across the alley to the back entrance. Try parking that close to your destination in River Park.

Craig argued that by turning the mall into a street, his friend could have parked directly in front of the store.

Bullshit. The thing about downtown metered parking, in any successful downtown, is that it is scare. You’re never guaranteed a spot by the front door. The only way to guarantee a space available to handicapped patrons is to designate it as an exclusive space – something unlikely to happen because theres a TON of those spaces there already.

And even if those spaces didn’t exist, the friend could have driven down the alley, and unloaded the wheelchair there. On a main street, you’re never guaranteed a curbside spot to load and unload. In the alley, you have all the time you need.

It’s a shame that Craig felt the best way to support his vision was by relying on fairy tales. It’s not surprising, because the economic analysis and EIR also exist in the realm of fantasy, but at least this one was especially egregious because of how easy it is to fact check.