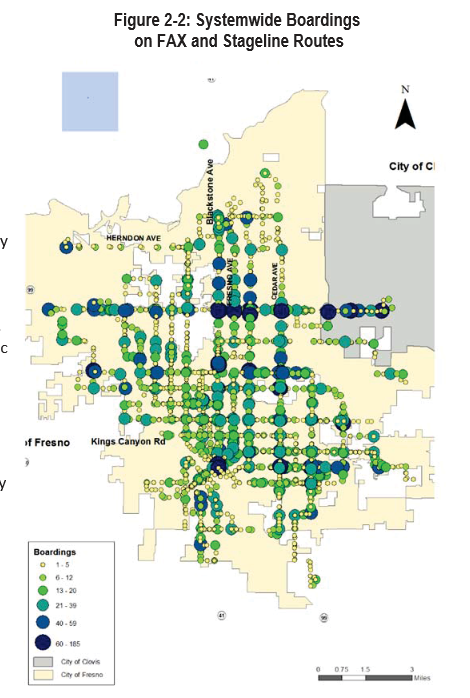 I got an interesting email today from the Fresno Council of Governments, the metropolitan planning agency for the Fresno area.

They’re conducting a study on how to improve FAX, which like most studies, includes public comment. Apparently, they put a survey online in late May, and sent out emails yesterday because the deadline is next week.

They’re paying the good folks at Parsons Brincherhoff large sums of money to do this.

In an effort to improve the efficiency and sustainability of our existing fixed route bus systems, the Fresno Council of Governments is currently examining the metropolitan area’s travel patterns for both Fresno and Clovis through extensive surveys and analysis of area transit riders and non-riders.

Project documents are available for review on the Fresno Council of Governments website at www.fresnocog.org/strategic-transit-plan.  Please take our survey and share your preferences about the transit system.

Public comments are encouraged and may be submitted in writing by 5:00 p.m. on June 23, 2014 to: info@theriosco.com

Sounds great right? A perfect opportunity to tell them that the area transit sucks, and they must do more to improve it.

Don’t get excited. It’s a loaded survey with a leading questions giving people a false choice. Here’s what it says:

Transit agencies have to decide whether to concentrate service to raise frequencies and increase ridership, or spread it out over the whole city, so that everyone has a little bit.

If given the choice of restructuring transit service in the Fresno/Clovis area by increasing bus frequency on more busy lines OR spreading out service across the whole city, which would you choose?

Isn’t it great that the public gets to throw their two cents in? Yay, Democracy!

Problem is, that’s not the only choice. The REAL choice is deciding how funding is allocated. The question should have been, should $55 million be dumped onto a highway ramp project, for a highway system that’s barely a decade old OR should the money go to increasing frequencies and service areas on FAX?
Should we widen every road to 6 lanes OR fund FAX?
Should we spend a million or so every year in airport “upgrades” OR fund FAX?
Nope. Instead we’re told the choice is to screw over one transit user in favor of the other.

Just how bad are these choices?  A recent report (PDF) looks at different scenarios, including one which eliminates the lowest ridership routes and uses the money for 15 minute service and later hours on the most popular routes.

This is especially apparent when they point out the following in a scenario they ran:

For example, Route 45 was deleted, serving portions of West Herndon, Fruit, and East Ashlan. This route carries over 30 boardings per hour, which would be above average in San Jose or Sacramento, for instance. In the context of FAX’s system average of 47 boardings/hour, however, it is relatively low and it contains long segments with very little ridership. For that reason, a scenario attempting to push Fresno’s productivity higher must delete Route 45.

Eliminating a route that peer cities like Sacramento would love to have, for the sake of eliminating the ” worst” route? Garbage. It just shows how poor the FAX situation is.

They also look at eliminating route 58H, which actually is the worst route by ridership. Thing is, the Children’s Hospital pays for it as mitigation for building in Madera, at a location only accessible by a brand new highway. Cutting it doesn’t make sense, since FAX doesn’t fund it.

There is another suggestion I don’t buy:

Weekend service should be standardized to clock headways, so that connections occur on a consistent pattern. This means changing 45-minute and 50-minute headways to 60 minutes, if 30 minutes cannot be afforded. The memorability of repeating clockface headways tends to be of greater value to ridership than the minor in crease in service quantity that these irregular headways represent

Garbage. 45 or 50 minute headways are fine if people can use technology to track the buses. This isn’t 1960. People shouldnt have to memorize bus schedules, they should be able to use a smartphone, text-messaging service or automated phone line to get exact info on the time of next arrival. You know, the kind of technology which major metropolises like Visalia have adopted.

Aside from that, the report has a great selection of data, including
trips by TAZ, and boardings by trip. It shows, for example, that the
6:35am Route 38 bus is at 223% load.

The highlight to me is a map showing boardings per stop. Guess where the busiest stops are? Shaw. But Shaw gets service only every 30 minutes because in the 1970’s, cross-Shaw travel was rare.

You can find the information and survey here. I left them some words in the comment section.