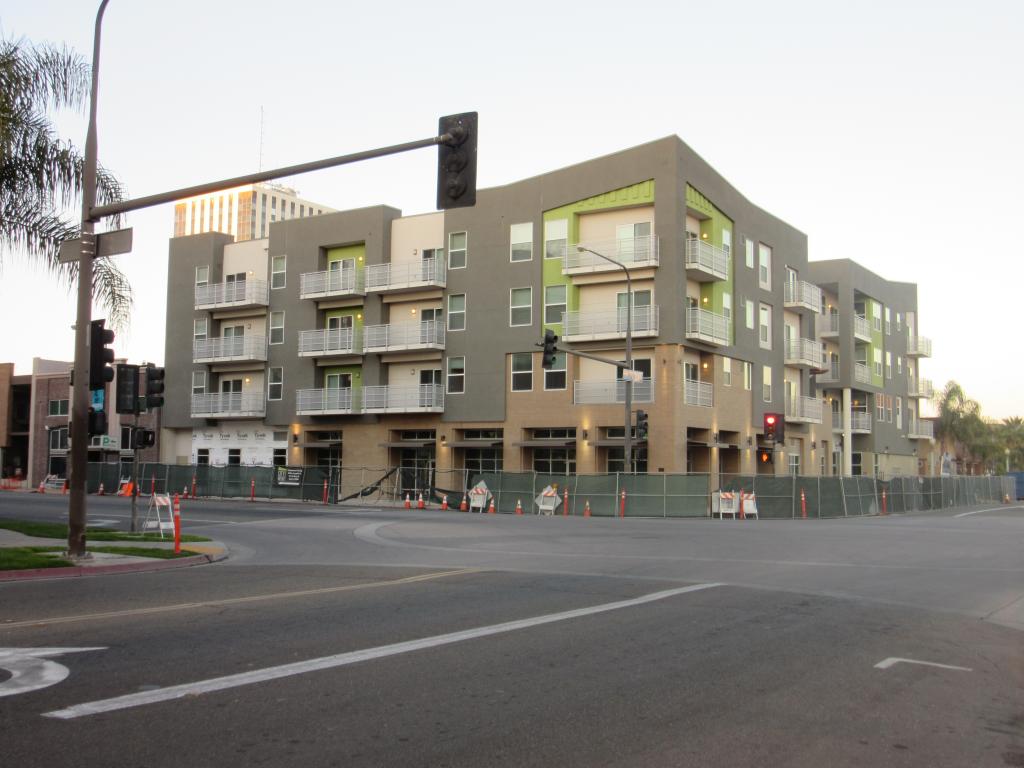 The last time this blog visited the site of the Droge Building, on the corner of Van Ness and Inyo, it was June 2014 and the wooden frame was up. A couple of weeks ago, I stopped by to see what is almost the final product. Exterior anyway, the interior won’t be done until this summer.

Unlike every other residential project downtown, this one stands at 4 stories, and you can really feel the difference from the 2-3 that GV Urban builds. The extra height really makes the corner feel more urban. Also, as this project was done by the Fresno Housing Authority, we get a unique facade, and not the recycled one used by GV.

Even better – no surface parking, which usually takes up most of the GV lots. There is a small garage, which residents can access through the existing alley, and not a new driveway. However, that’s only a few spaces, as there is a public garage directly across the street which residents will be able to rent a space in.

Incidentally, the project is actually called “City View at Van Ness.” Droge was the name of the building that was demolished, but I used the same in the title for consistency.

I love the balconies Spiral garage visible on the left

Sadly, like all downtown projects, the street lights continue to suck. However, the accent sidewalk lighting looks very good

The building has an interior courtyard

Alley and garage visible on the side Sidewalk is much wider than the GV projects, but not very green

These balconies face the alley

Fresno continues their policy of closing the sidewalk for no reason

The street level is decent enough

Looking up at their private courtyard

The Van Ness side is built for retail

The building closest to the camera is a very lovely two story restaurant space, which sadly has gone out of business twice.

A short walk to the courthouse

It looks like shortly after I made my visit, they took down the fencing. The official twitter page had this image recently:

There’s an official website available, which includes floor plans, but no pricing.

There will be studio, one bedroom and two bedroom units, and what appears to be the world’s smallest fitness room. I’m sure they’ll post interior shots in the next few months.

Anyone know what goes on in this building? Sounded like a party.

Supposedly, someone is going to develop that lot

One day Fulton Mall will be open to cars, and look just as lovely at Fulton Street

I didn’t realize there was a beer garden here

They need to work on this elevator if they want the residents to feel safe. Just on of 8 lights was working