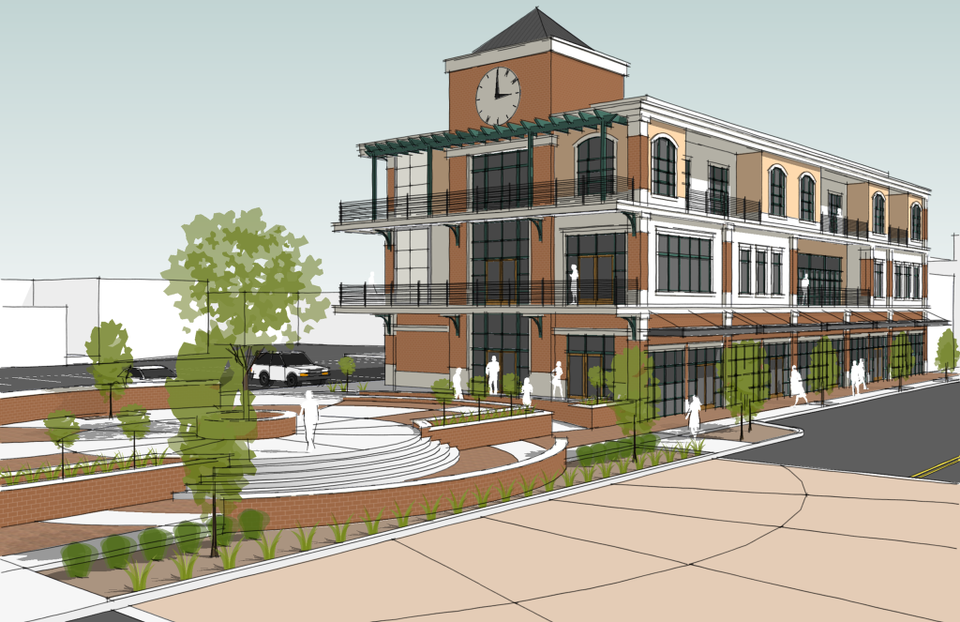 Two new exciting projects are in the work for Old Town Clovis. One is an office/commercial development near the heart of Old Town, at Pollasky and Bullard. The second is a new residential project up Pollasky at Sierra, what could be considered the original suburbs of Old Town.

The commercial project will be coming to the old DMV lot, next to a brand new plaza built as a beautification project. The Fresno Bee reports:

Centennial Plaza Development Group, made up of the Shamshoian family, owner of Realty Concepts in Fresno, and Bill Cummings and James Reedy, owners of Legacy Construction in Fresno, will develop the northern end of the site at Pollasky and Bullard avenues.

Both developers are considering three-story buildings, for a total of 31,000 square feet, to blend in with the architecture of the southern part of Old Town Clovis such as the fire station next door and the lawyer’s office building across the street.

Realty Concepts plans to have an office and restaurants in its building, the city said. Its goal is to start construction in early summer 2016.

Peterson, a longtime Fresno and Clovis developer, is planning on having retail and office tenants. He said late Tuesday that retailers are already calling about spaces in the building.
Fresno Bee

The article included a couple of renders that appear to have been put together after an afternoon on SketchUp:

Ahem. Regardless of the quality of the rendering, it does show a decently urban building that will fit right in.

This isn’t the first time something has been proposed for that lost. Back in 2011, Granville, known for their GV Urban projects in Downtown Fresno, proposed apartments:

Downtown Clovis, known for its old-fashioned Western charm, could soon be getting a piece of the urban lifestyle: residential lofts with ground-floor shops and offices.  Granville Homes is proposing to build 35 loft-type condominiums above commercial and office space at the site of the old Clovis City Hall and the former state Department of Motor Vehicles office. A plaza at the front of the project would serve as an entryway into downtown Clovis where Bullard and Pollasky avenues meet.

That was obviously never built. Clovis stated that they weren’t ready for these big city changes.

So what’s this new plaza they all keep talking about? Well, that’s something I’ve been meaning to visit….

Here is the parcel we’re talking about: The ugliest block in Old Town

On the north side of the emptiness, you can clearly see where the DMV building used to be, demolished within the past decade, and since used for parking.

Within the past year the lost has seem some great changes. They’ve built the new plaza, and narrowed the street by adding new curb extensions on all corners. They also made the walk from Clovis Avenue nicer, and realigned the parking on the Bullard stub.

You can see where the two new buildings will go. Rather skinny! The parking will be hidden in the back, and accessible by alley. Once they’re in, the area will be much, much nicer.

To my surprise, Google Streetview has been by recently (April, 2015)! I still have to go down and take a look, but here is what they show:

Note the new lights, the plaza, the extended sidewalk, and the unfortunate loss of mature trees.

On the Clovis side, Bullard officially became a parking lot, rather than a useless road, and new sidewalks were installed with more trees and the antique-style lighting om Clovis Avenue.

In a shocking development, it seems to appear that Clovis Avenue was narrowed by almost a foot!

Of course the Avenue really needs a road diet, with a center turning lane and bicycle lanes.

Moving up Old Town, we find ourselves at Pollasky and Sierra where an interesting new residential project is proposed.

In yellow, you see the existing Old Town Bicycle Trail.

The property marked off is the one in question. On the left, in red, the developer proposes to keep the homes, but add carports accessible from the alley. The exciting stuff takes place across the alley, in the green lot.

Apparently, they have an interesting history!

According to the filing (PDF), they were moved to Clovis in the late 1940’s from Fresno Airport, where they previously existed as housing for officers. At 730sq ft, they are small by modern standards. They are all occupied and will not be touched, for now.

The empty lot is where the fun lies. The developer proposes knocking down the existing home and building 5 new homes, each about 1,500sqft.

I don’t know how old the existing home is, but I would say “very”

City ordinance requires that all new homes have 60 feet of street frontage, which can’t be done here. Instead, they are proposing three homes on Sierra, and two homes fronting the Old Town Trail. That is, the front of the house would look onto the trail, with the existing alley serving as car access.

The developer uses a similar project in Davis, CA, as an example.

The developer also claims that this will make the trail safer and more attractive. I agree – right now most of the trail looks at the back of industrial buildings, thanks to its history as a rail line. By having homes front the trail, it will add eyes to it.

By most measures, five new single family homes isn’t the most exciting of projects, but in this context, it’s pretty interesting. It is bringing new residential development to the “downtown” area of Clovis, where residents can access the trail, and walk to restaurants, bars, banks, and stores. It’s not exactly a skyscraper, but for a city that is constantly bulging outwards, it is certainly something different.

When put in the context of a new hotel, the finally completed trail, and the upcoming new library, it is clear that Clovis is continuing to work towards creating a strong downtown. Of course, there’s a whole lot left to do. The area still has plenty of empty lots, especially along the trail.Maybe one day we may see a 4 story apartment/retail structure approved?