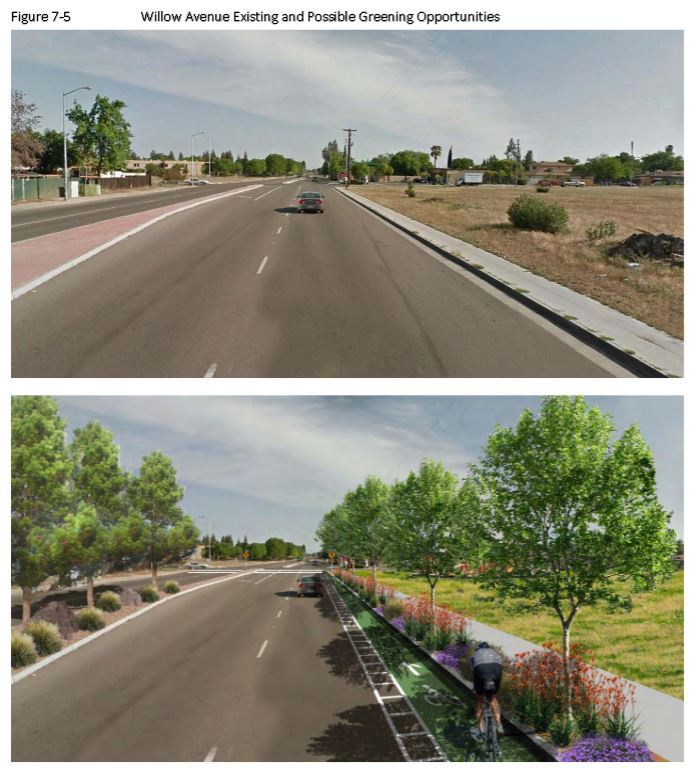 Although to be fair to me, a search through Google News reveals zero articles on the subject. Also, the final report shows the first community meeting with a grand total of 28 attendees (13 with white hair), and according to the workshop summaries, the 4th, 5th and 6th workshops had attendances ranging from 1 to 5 people.

The report however, is decent.

You can view the Final Plan (PDF) here.

So what’s this plan about?

Specifically, it calls upon the many (MANY) benefits of having a healthy urban forest, and of course, doing so in the context of the drought. For Clovis, they focus on reducing ambient air temperatures (via shade), improving air quality, and tying into storm-water management and bike/ped transportation.

The goals of the plan are to:

The plan itself is not amazing, but it does hit on some key points which the city has ignored in the past. One I find particularly important is the need for shade to promote bicycling and walking. The report also talks about how some streets are too wide, and could be made safer by using the extra space for trees.

Note that while this is simply a concept, it is the first render I’ve seen coming out of Clovis that features green paint and a buffer for a bicycle lane, something not found at all in the area.

The plan also talks about specific plant types, especially those that are drought tolerant and suitable for the region.

Of course, the plan features talk about implementation. Fortunately, Clovis has a good record with implementation of the park and trail plan. What I specifically hope to see is the addition of green infrastructure that also calms traffic. That is, sidewalk extensions at corners with rain gardens. That’s a concept foreign in Clovis, but one that is now on the radar thanks to this plan.

What is most likely to happen in the short term is a renewed effort on sustaining a healthy tree canopy in the commercial areas, especially Old Town. The report has the recommendations broken up by goal and time-frame, so they’re worth checking out.

An again, speaking on outreach, the plan ends with summaries of the workshops. There were nine workshops, three for each “round”. The middle three workshops had an attendance of “approximately 3 persons,”  “5 persons” and “1 member of the public who could only stay for fifteen minutes.” Clovis, if you’re going to hold public workshops, you need to learn how to actually engage the public, especially if you’re going to pay 6 staffers to talk to a single person. Let me guess, there was a single ad placed in a weekday edition of the Fresno Bee?

6 Replies to “Clovis now has an Urban Greening Master Plan”