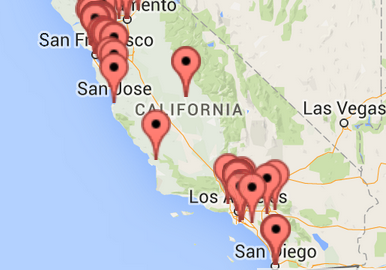 The Fresno blogosphere is surprisingly desolate. With a metropolitan population of just under 1 million, you’d expect a lot of voices online, typing away about Fresno food, events, crime, planning – whatever. However, for reasons I don’t fully understand, that’s quite not the case.

I’ve been operating this blog for almost five years now, which typing it out, is kind of shocking. In that time, I’ve seen a dozen Fresno-oriented blogs come and go. Unfortunately, there have been more going than coming. Right now, my list of Fresno blogs to read is not much of a list.

Some, like the Cured Ham, IBikeFresno, Fresno Bites, Taste Fresno, and the Fresnan, remain online, frozen with posts from two, three or four years ago. Others, like Urban Fresno have been taken offline entirely. A couple of professional blogs keep trucking, namely the Fresno Beehive and the Downtown Fresno Blog, but those are paid efforts, not products of passion (not that they’re bad).

What inspired this post was the return of That Fresno Blog (TFB), which relaunched this past weekend. Probably the best looking of all the amateur blogs, TFB launched with a bang in 2011 but didn’t last long before the fresh content dried up. The blogger, Veronica Stumpf remained active online – on Twitter and Instagram – but a tweet, in my opinion, is no replacement for an article. This time around, she’s narrowed her focus to real-estate, and has been blessed with a Fresno Bee article to serve as initial push in readership. I hope that the narrowed focus helps her keep the blog going this time around. I also encourage my Fresno readers to add that site to your bookmarks, as the content looks very promising.

The truth is, blogging is incredibly time consuming, and abandoning a blog is quite frankly the most logical decision for most people. Even a picture-heavy post, with half-sentences as captions can take hours to put together. Post such as the one of the Fulton Mall Deconstruction can rival a full time job in the commitment it takes to build – even if the end result isn’t particularly beautiful.

Hell, I have 102 (!) posts in various stages of draft form, from one or two topic sentences to a 1,500 word post on bicycling in NYC I just haven’t gotten around to finishing.

As such, I completely understand why bloggers must throw in the towel. There’s something especially crushing about spending 10+ hours on a high-quality post to see the visitor needle barely budge, while something quickly put together, such as my post on Sim City 5, receives over 10,000 views. Even hitting the click jackpot isn’t going to bring any money in – the view count is mostly for ego really, and an encouragement to keep going.

Jarrett Walker of the Human Transit Blog hit on this point a few years ago, when looking into what brought in visitors to his blog:

No, it was post about new transit-themed toys by Lego, a post that took me less than 10 minutes to prepare as it was mostly a friend’s email.

Am I focusing on the wrong things in life?

However, individual bloggers making the decision to move on doesn’t quite explain the current state of the aggregate scene. After all, shouldn’t we expect a dead blog to be replaced by a new effort ever few months?

I don’t know of any database that tracks blog activity, but here’s a couple of quick example of how Fresno stacks up.

Looking at the Streetsblog Network, which only tracks urban planning blogs, one can quickly see that the Central Valley is not a blog hotspot. For the entire valley, you’re looking at me, and a dead biking blog.

I also decided to look at Reddit as a proxy for online activity related to local blogs. If you’re not familiar with Reddit, the site has thousands of subreddits, which are dedicated to one specific topic. That is, the Fresno subreddit is about all things Fresno, and is populated with links to local articles or text posts with questions or comments.

And here is how their Reddit community stacks up, in terms of subscribers, and also how far back the front page covers (less days means more recent activity)

Of those, I’d argue the most comparable in terms of land use and community cohesion are the ones I bolded. That is, while the Worcester metro is of a comparable size, the city itself is more like Clovis in terms of size; people in the metro area probably do not feel like Worcesterites. Bridgeport/Stamford is impossible to compare, since it’s half the state, and Honolulu is a case where most people probably post under the Hawaii tab since most Hawaiians live on Oahu.

Under that metric, Fresno has an underrepresented online presence. Not as bad as Bakersfield though (1,740 on Reddit), but the underlying causes are probably identical. I wonder if the statistics hold true for online activities that aren’t text heavy, such as Instagram?

I wonder if there’s a solution to this lack of online engagement in Fresno?

Or maybe I’m asking a question that is no longer relevant. Maybe it’s true that blogs everywhere are being replaced with Twitter thoughts and Instagram pictures. If that’s the case, then I think it’s a shame, although I’m sure long-form journalists felt the same way when blogs threatened to eat their lunch.

That being said, I’m going to keep on blogging, and I’m excited to see Veronica jump back on board because it’s gotten quite lonely around here.

(Look for various posts on downtown Fresno construction updates in the upcoming days/week).

9 Replies to “That Fresno Blog returns – Also, why does the Fresno blog scene suck?”