We begin with a chart showing all three California lines over the past 15 months. That allows us to see seasonal changes over the course of the year, and get a brief reference of year-on-year progress. 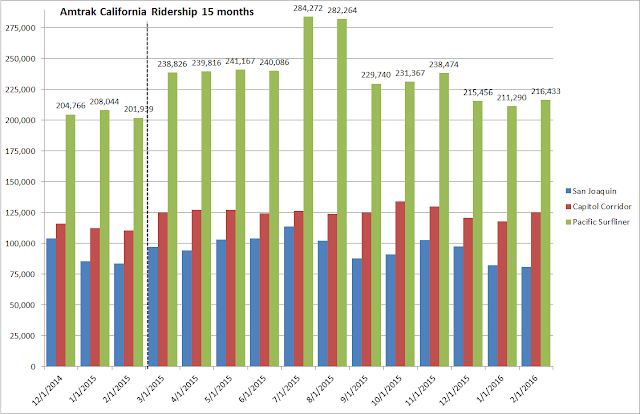 One thing popped out at me immediately.  See July 2015? See how close the San Joaquin is to the Capitol Corridor line? Turns out, that month, the San Joaquin had 90% as many riders as the Capitol Corridor. That’s huge. For reference, in July of 2009, the ratio was 66%, and in 2010, 63%. I did some additional digging and it looks like the highest it has ever been was July 2015, when the ratio was 94%.

This is even more impressive, because while the San Joaquin has been fighting for a 7th daily train, the Capitol Corridor line gets 15 round trips a day.

That indicates to me, that with the new train, the San Joaquin might surpass the Capitol Corridor in ridership for the first time ever – with half as many trains, and operating some hand-me-downs.

It’ll be hard to keep giving the San Joaquin 3rd tier status when ridership starts to exceed what has been a model corridor. As the new service starts in June, the July numbers will be very interesting indeed. I’ll report them when they get released in late September.

Viewing all three lines over 7 years shows how they’ve all grown and changed over time. 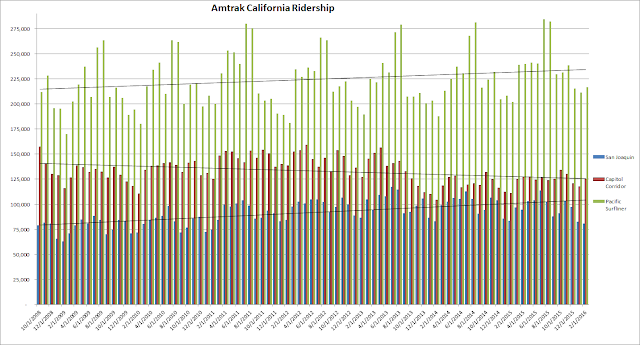 Now we see that the San Joaquin is showing the fastest growth, but the Pacific Surfliner is very healthy. Capitol Corridor is not doing so amazing. However, part of that reason was a change in accounting. In September of 2013, Amtrak changed how they calculated ridership from sales of 10-ticket packs. According to their reports.

In FY14, Amtrak began counting actual lifted ridership for multi-ride tickets (due to eTicketing), rather than the estimated multi-ride ridership used previously.

This impacted the Capitol Corridor line more than any other in the country, because so many riders are commuters. This change didn’t impact revenue at all however. What appears to have happened was that commuters were buying 10-packs, Amtrak was assuming they were riding – but they didn’t. Either they lost their tickets, or kept them in a drawer, or they expired. So Amtrak gets the money, but the seat went empty.

Here we can see each line, individually, from 2011 to now. July of each year has been highlighted as it tends to be the month with highest ridership. 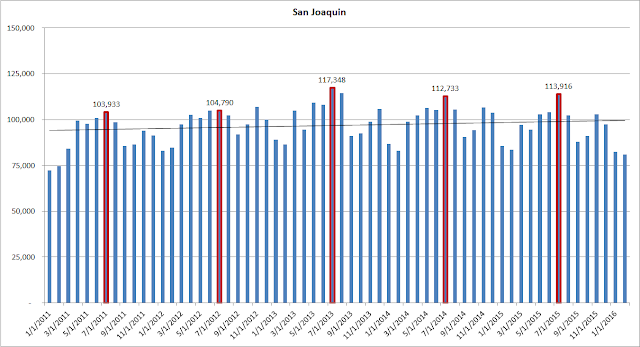 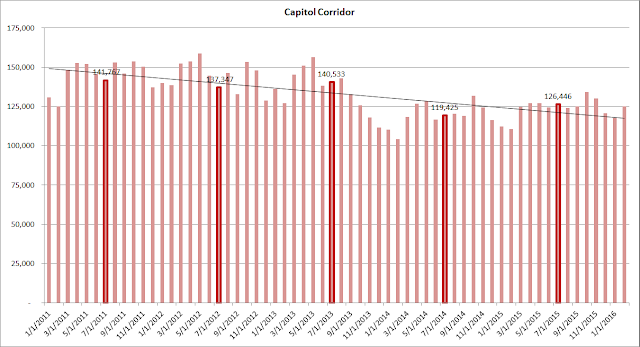 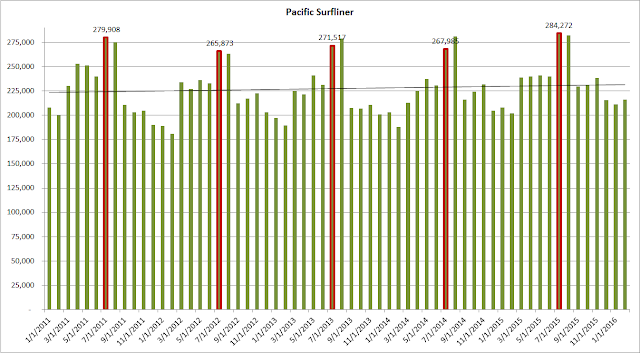 How does this compare nationally? Here are the top ten lines around the country for January and February of this year – the latest data available. 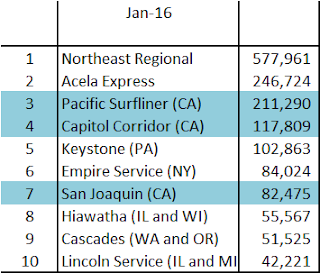 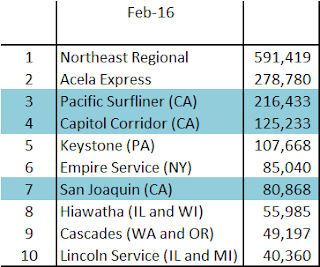 The order hasn’t moved much since 2012. One service that saw significant declined was DC-Newport News, but I believe that’s because Virginia added trains to other destination, so the ridership is now split between 3 lines instead of one.

What jumps out as always is that California makes a lot of sense for High Speed Rail. Always assumed to have low rail ridership by East-Coast media, train ridership in California is always strong.

I hope to do these updates a little more often again, especially to see if the added service draws more riders thanks to a more convenient schedule.