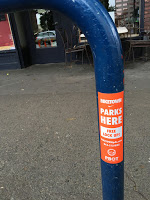 Bike share finally came to Portland, Oregon this week, and the system has already proven to be popular. At this point, bike share in the US is no longer a novelty, as successful systems are integrated into the day-to-day life of dozens of major cities.

However, not all bike share is created the same, and Portland’s new system has the distinction of being the largest “smart-bike” system in the country. This is in contrast to most large systems which rely on “smart docks” instead.

The primary difference is the location of the electronics. In a smart
dock system, everything is handled by the dock and an attached kiosk. On
a smart bike system, the bicycle itself carries all the technology.
That means you can lock your bicycle to anything. You use a pin code to remove the built in lock and when you’re done, you reattach the lock to the bicycle (and another fixed object of course). Built in GPS ensures the company knows where the bike is.

So why pick one system over another? If most cities have used smart docks, why did Portland go with smart bikes?

The biggest factor involves cost and ease of deployment. A smart bike system actually requires zero infrastructure. You can release the bicycles and let users dock wherever they want – existing racks, fences etc. Docking areas can be created virtually, and displayed with signs or stickers.

A smart dock system can’t launch until the docking stations are all in place. You trips are limited to starting and ending at a sanctioned dock. And these docks are expensive, heavy, and proprietary. When Boston launched their system, they installed 5 stations a day, the best that could be done with the need to use trucks and a specialized crew. While the stations are solar powered, and thus don’t require utility connections, they still require proper installation. That’s a lot of time and money.

Most smart bike systems have decided to install dedicated parking racks at key locations. However, the prime reason to do this is advertising. A colorful station with a kiosk and 30 identical bikes catches the eye. That acts as advertising and informs people of the system. Even those who know nothing about bike share can probably list stations in their municipality because they walk by them and see them, even if they’ve never interacted with them.

If the system was entirely virtual, this wouldn’t be the case. Out of sight and out of mind. You could easily walk by 100 of these a day and not know what they were.

While this might be appropriate in a small system used by a corporate campus or a university, where it is easy to get the word out, you need visibility for the mass market.

That’s why Portland and other large systems such as Santa Monica have visible stations as well.

Of course the cost of these stations are significantly less than those for smart dock systems. You can get a bike rack for $40. These custom ones probably cost a bit more, but they’re still simple metal attached to the sidewalk or a platform. Let’s say $300 gets you space for 2 bikes.

The fact that the racks have no electronics also means they can be arranged in any shape, rather than a ridged straight line.

Aside from visibility, stations also creates predictability. A smart dock system will rarely move (it’s expensive to do so), but smart bikes could be parked literally anywhere. If you’re not interested in a Pokemon Go type experience for bikes, where you have to use the app to track one down, you’ll value the predictability of a station. Many smart bike systems try to encourage the use of the stations by using pricing tricks – a debit if you park away from one, a credit if you bring a bike to one – for exactly this reason.Of course, smart dock systems don’t need an incentive because bikes will always be at the stations.

On the flip side, another advantage of the smart bike system is the flexibility. Have a major event coming up and expect 500 riders? With a smart bike system, you can have the riders park anywhere nearby, simply create a virtual parking zone using the GPS system.

Events can also deploy standard racks for the smart bikes to use.

While a smart dock system can accommodate event demand through a valet service, staff is needed to check in or out every bicycle, and ensure they’re not stolen.

One of the major problems with a smart dock system is arriving at a station where every dock is full. That scenario can simply never happen with a smart bike system, since you can lock up to a pole or fence.

Of course, the owner of that fence might not be happy about it – as was the case in Jersey City where people complained that the bike share bicycles were “illegally parked.”

Update: One issue that has been reported by Portland users is that GPS is not always 100% accurate. In urban areas, buildings can confuse the GPS system, resulting in the location being reported a few meters away. You see this phenomenon frequently when using Google Maps which might show you a half a block away from your actual location. Unfortunately, with the smart bike system, this kind of error can result in a user fee if the system thinks you locked your bicycle outside the virtual cordon. One solution that the operator can implement is by increasing the virtual cordon to account for this technical error.

This flexibility is also useful on the back end. With a smart dock system, you’re locked into a single provider. The proprietary docks will only accept proprietary bikes. That means if you want to change manufacturer after the contract ends, you need to scrap the entire system – docks and bikes – and start from scratch. NYC, Boston, and DC all felt the problems of being locked in when the manufacturer of their systems went bankrupt. All expansion was delayed a year until the company was bought out and could resume manufacturing.

Because a smart bike system relies only on the bikes, and those bikes use a pin code to be unlocked, you could even transition to a system with two bike types being active at the same time, and your stations don’t have to be touched.

So what’s the downside to smart bike systems?

Well, by putting all the technology on the bicycle, you’re adding extra weight and also introducing the possibility of more mechanical failures. Say the rider crashes; now the entire locking and transaction mechanism could be potentially damaged. With a smart dock system, all the expensive components are safely in the dock.

The other issue is accessibility. Because so much of the smart bike system is virtual, having a smart phone is going to significantly impact your experience. No, you don’t NEED a smartphone to access the system, but it helps.

For example, many bikes won’t be at the stations, so you need internet to help you find them. In a dock system, you know where the stations are, and if your station is empty, you can use the map and kiosk to find nearby stations with bicycles.

Overall, it seems like smart bike systems offer more advantages due to the added flexibility and lower cost, especially as more and more people purchase smart phones . Indeed, the supplier of the Portland System, Social Bikes, has been expanding from small university systems to major cities, and they do have competition in the area of smart bike systems.

However, it is important to look out for hidden costs. It is possible that maintaining each bicycle ends up costing more for the city or operator, and users might become upset at a confusing fee structure which differentiates between locking at a station, near a station, in a virtual area, or elsewhere.

That being said, the fee structure is completely independent of the technology chosen. And that’s something for a future post.