A week or so ago, Google refreshed their maps service. Most of the changes were minor – new road outlines, a different typography, and a few other minor tweaks designed to make the maps easier to understand. However, as part of that update, they introduced what could be a major new feature: areas of interest.

These areas of interest are determined algorithmically, using an
automated process to pick out areas with the most stores, restaurants,
or bars, but Google says it’s also using a “human touch” in high-density
areas — like New York City — to point people to the coolest locations.
The Verge

How great are these results? Well, it depends.

Let’s start with a small town: Montpelier, the capital of Vermont. With only 7,855 people, it is the smallest capital in the country. At a glance, the areas of interest seem to work quite well. The new shading does draw you in quickly. 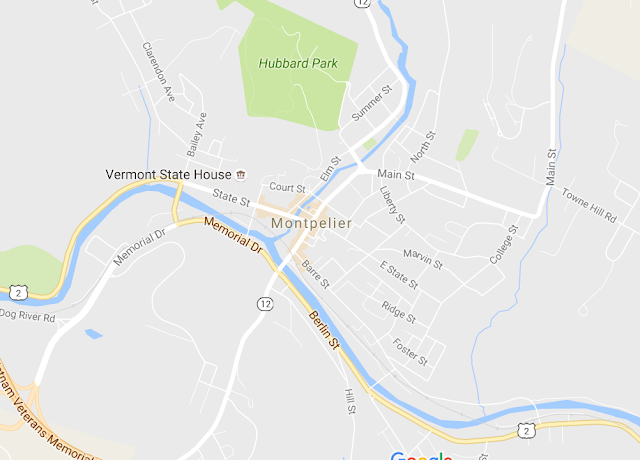 Zooming in, we see that the highlighted area is indeed full of activity. 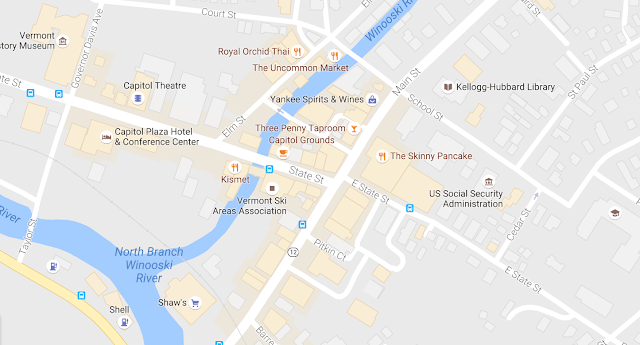 If it’s your first time in town, the new feature certainly did its job.

How does it work in a dense urban area, like San Francisco?

Again, pretty damn well. The orange areas pop out, and are also accompanied with their neighborhood names. Union Square, the Castro, the Pier 39 Area. Yup, it seems to be working. Those are the areas full of shops, cafes, and things to do. 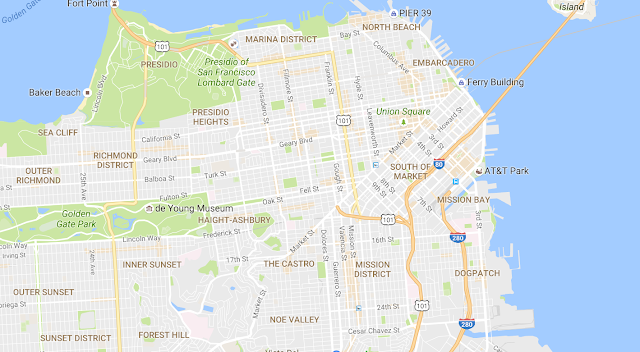 But Fresno is a little different. It isn’t a small town with a well defined commercial main street. And unlike San Francisco, it is lacking in distinct neighborhood clusters (aside from the Tower District).

So how does the feature work in a suburban context?

Let’s start with the southern half of Fresno. Here a couple of distinct neighborhoods do pop out quickly: the downtown Fulton Mall area, Chinatown (not labeled) and the Tower District. Small, but visible.

However, the other points of interest are more well known for their strip mall anchor. Over by Brawley and Shaw (top left) our attention is drawn to a couple of retail centers anchored by Target, Walmart, Dick’s Sporting Goods, Ross, and a movie theater. Certainly a retail destination, but not quite an area worth a stroll. A little to the east, upscale Fig Garden is correct highlighted, as are Manchester Center, Fashion Fair, and Sierra Vista Mall.

However, even though Blackstone is pretty much commercial from end to end, most if it is dark – including the new Walmart at Ashlan.

East Shaw is similar. In this image, Shaw is lined with commercial on both sides. And yet only Sierra Vista and the Walmart Center made the cut. Movie theater, pet store, bowling alley, Olive Garden and Applebees – sorry guys.  You have to zoom in to even see most of the activity here.

And while the algorithm does seem to favor anchors like Target in suburban areas, some businesses are apparently more noteworthy than others. The River Park Costco is always packed from open to close, but apparently it doesn’t make the cut, nor does the Home Depot. But Best Buy and office Depot do. 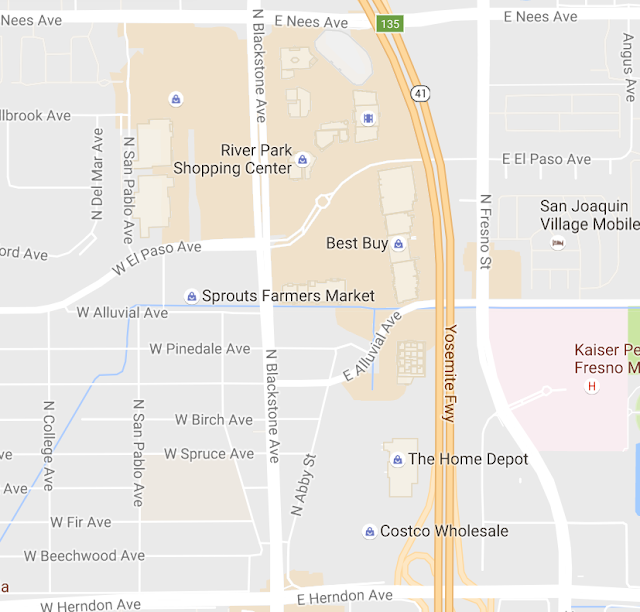 And for some reason, “buybuy BABY” is more interesting than Babies’R’Us. Check out how the area of interest cuts off! 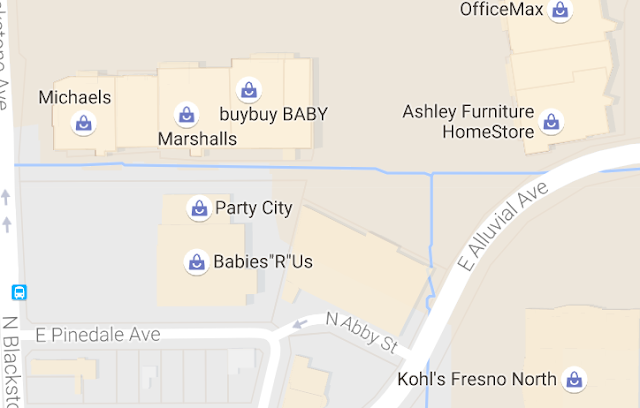 That’s not to say that Google is fully biased to mega retailers. Neither the Walmart on Herndon west of River Park nor the Kings Canyon one made the cut, and two Targets are also left out (Barstow and Shields)

Of course these arbitrary decisions make the product less useful. Without a clear explanation for what the criteria is, there is too much room for error and abuse. Google could easily use this as a revenue opportunity – pay us, and every Babies’R’Us will automatically be marked as an area of interest for example, and their competitors de-listed. While Google is well in their rights to do so, not disclosing that kind of arrangement could seriously hurt the value of the software for the user.

Additionally, when Citylab explored the new feature, they found that it might be unfortunately tilted towards wealthier areas.

“non-interest” neighborhoods and corridors seem to have in common is
that they are poorer than the cities that surround them. In two of them,
English isn’t always the language you’re most likely to hear on
the street (Westlake is heavily Spanish-speaking, while in Dorchester
you’ll hear Spanish, Vietnamese, and Jamaican and Haitian creoles, among
other languages). Large swathes of Northeast D.C. have some of the
lowest broadband adoption rates in the District. Businesses without an
online presence appear to have a distinct disadvantage

I didn’t notice this problem too much in Fresno. While lower Blackstone is notably dark, so are many upscale businesses in northern Fresno, such as Sprouts, Trader Joes, and the fancy shopping center at Friant and Fort Washington. Meanwhile, Chinatown popped up, which surprised me.

Overall, I think the feature is a good idea, but for most of Fresno, it is useless. If it’s your first day in town, the feature might point you to a genuinely interesting neighborhood – the Tower – or Manchester Center, which might not quite meet your standards for “interesting.”

I wouldn’t be surprised if other cities with similar development patterns have the same problem.

On the other hand, the new distinction can make more sense when looked at on the more local context. That is, biking distance versus driving distance. In that case, the Walmart/Panda Express/Applebees complex may indeed may be the most interesting destination in your side of town. Of course, that’s a Fresno problem, not a Google one.