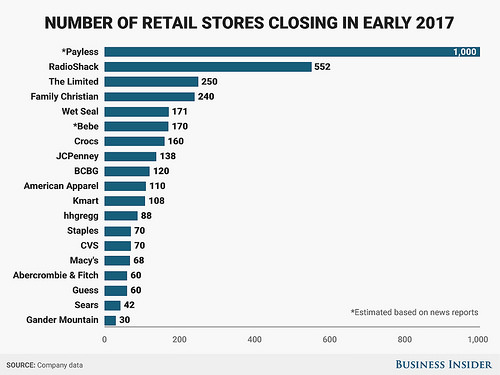 There has been a lot of talk in the press recently about brick and mortar retail being on the way out. The culprit, supposedly, is Amazon, and other online retailers, who can offer so much more convenience than physical shops can, and also offer lower prices.

Business Insider is calling it the retail apocalypse.

Thousands of mall-based stores are shutting down in what’s fast becoming one of the biggest waves of retail closures in decades. More than 3,500 stores are expected to close in the next couple of months.

Department stores like JCPenney, Macy’s, Sears, and Kmart are among
the companies shutting down stores, along with middle-of-the-mall chains
like Crocs, BCBG, Abercrombie & Fitch, and Guess.

Some retailers are exiting the brick-and-mortar business altogether and trying to shift to an all-online model.

But hold on a second, the keyword seems to be in their lead sentence: “mall-based.”

And that’s an important distinction to make, which most of the media seems to be missing. But that’s not a surprise: in large parts of the country, “mall-based” retail is all you have. There are the Wal-Mart anchored strip malls, which play host to maybe a dozen barnacle stores like Gamestop and Nails Plus, and then the regional enclosed mall, which has everything else.

Downtown? That’s for jury duty, not for shopping.

The list of shops closing confirms this: many are almost exclusively mall-based retailers. This is also key to understanding what convenience actually means. 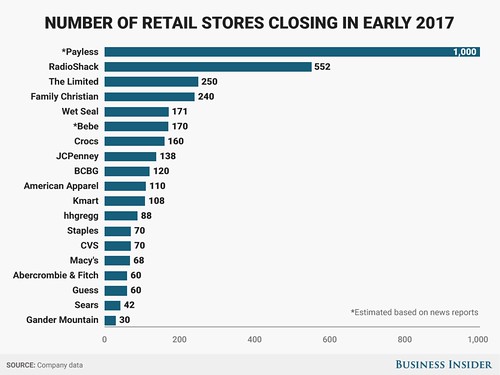 The exception to “mall based” is Payless Shoes, but they’re being destroyed by private equity vultures.

On the other hand, it seems to me that places that DO have active, walkable downtowns seem to be doing more than fine: they’re thriving. Why is that?

Online shopping is supposedly convenient because you can do it from your couch. However, it is not instant. You have to wait 2-days to up to a week to get your stuff. And while the online browsing can be close to instant if you have one or two items in mind, shopping by browsing, as one would do aimlessly walking around a Macy’s or Best Buy, can be tedious (17 tabs isn’t fun). The lack of a fitting room means that even free exchanges can result in 2 weeks between logging on and getting a pair of pants that fit.

However, the couch is especially convenient when physical shopping is an ordeal. A separate trip. An entire production. And that’s the case in a suburban environment when you have to go to the mall to shop.

It’s not on your way, so it’s a unique trip. It requires twenty minutes driving (each way!) just to get there, and then some time finding a spot in the enormous parking lot (why is parking such an ordeal even at dying malls?). Then one must walk through the parking lot (not pleasant), and then elbow one’s way to the store (why are there people in a dying mall?).

It’s not a trip of convenience. It consumes a couple of hours. At the most convenient times – after work on a weekday, or the middle of Saturday – the mall is at its most crowded, and most unpleasant.

So yeah, online shopping is more convenient and more pleasant, in comparison to shopping in a suburb.

But in an urban, walkable environment, much of that hassle goes away. When walking from job to home (or to and from transit), there are a dozen shopping options which require no deviation or extra trip to reach. Picking up a shirt can be done in five minutes as part of a regular trip. You’re just strolling down the sidewalk, oh hey shirts, in and out, and done.

Online shopping simply can’t compete against that kind of instant gratification. (Note: Large ticket items like TV’s are a different issue in an urban setting, but if you note the list above, all the stores with major closings sell items that fit in a plastic bag).

And even in cases where a specific store might be a bit out of the way, the experience is many times better in an urban setting.

Reaching the suburban mall requires driving on the freeway, navigating endless stop-lights, and dealing with parking lot traffic. No one says that like driving to the mall. Sure, they might like being in the mall, but getting there? Ew.

Compare to an urban shopping experience – something like Newbury Street in Boston, or M Street in Georgetown (which is so popular they remove parking to expand sidewalks). Going a few blocks out of the way isn’t a hassle because it’s a fun experience (exception: Times Square).

In that regard, indoor shopping malls in truly urban areas seem to be doing just fine as well. The Prudential Center in Boston, for example, is completely ingrained into the urban grid. The mall hallways are open 24/7, and act as any street would in regards to pedestrian transportation. 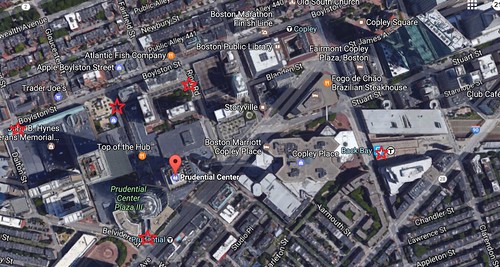 You can get to and from the red stars inside the Prudential Center and Copley Mall 24/7. Newbury Street is a couple of blocks away.

Indeed, blaming the indoor aspect of malls is silly. Over the past decade, new “lifestyle center” malls have sprung up around the country that attempt to mimic downtowns.

Except, as we zoom out… 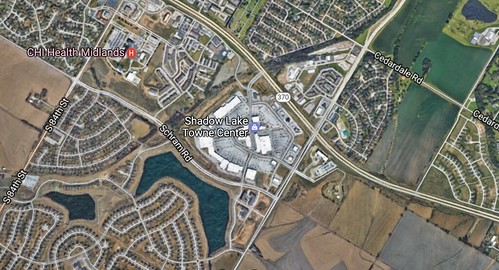 This is still 100% auto-dependent – and thus requires a unique trip, making it less convenient than the internet. They’ve gone and put lipstick on the pig without understand why their portfolio of indoor malls has been failing. Do they really think the good folks of Omaha want nothing more than to drive a long distance to a mall where they have to walk outdoors in the winter?

To highlight this point, I decided to look at the locations of some of the JCPenneys which are closing. I quickly noticed two things: almost all the locations were either in towns that are way too small, OR in a auto-focused region, in a center that requires a special trip to reach.

Take Lodi, California, both a smaller town AND at the very edge, requiring a special trip. 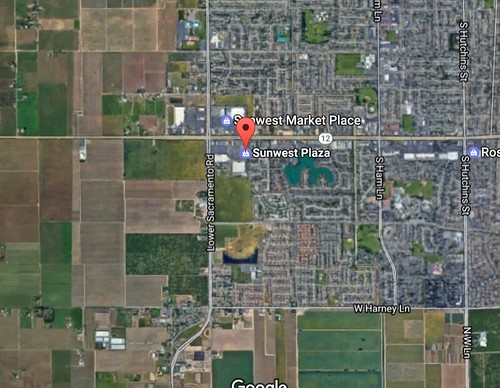 Peru, Illinois, you guessed it… 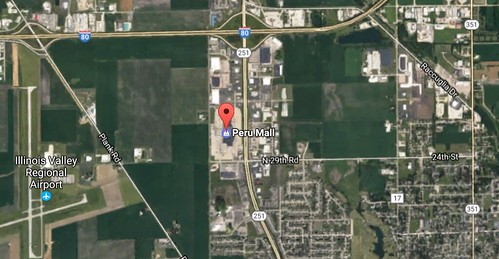 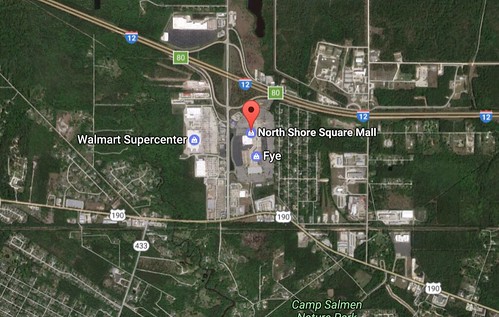 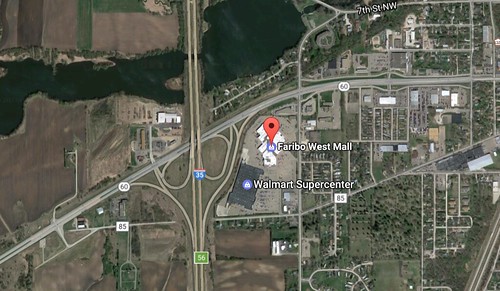 Well, you get the point.

While there were a couple of exceptions on the list (like Downtown El Paso), the trend, at least for JCPenney was pretty obvious. The locations sucked -out of the way, out of sight, and out of mind.

Looking abroad is another great example on contrasting successful malls with failing malls. If the internet was truly what was killing retail, then we should be seeing the same thing in countries that are highly connected and have dependable post systems.

And yet that doesn’t seem to be the case. While I haven’t personally been, I’ve read that enormous malls are still extremely popular in countries such as Japan and South Korea, where the internet infrastructure surpasses anything in the US.

So I decided to look at Brazil, a county that loves malls, and where I lived for a decade.

In Curitiba for example, a city with over a dozen popular indoor malls, almost all are built into the urban fabric. Such as Shopping Mueller, which underwent an expansion that added an architecturally awkward top two floors. The mall is surrounded by apartments, offices, and major transit corridors.

Or Shopping Curitiba, also located on a BRT corridor (and bike lanes which didn’t exist when I was there).

There is nothing more convenient than a store that is integrated in your daily routine.

American retailers can continue to blame Amazon, or they can ask why people are saying 2-day shipping is more convenient than grabbing and going.

Chains like bebe, Wet Seal, and Abecrombie can’t change our land use patterns, but the folks at Simon and General Growth Properties have a lot more power. Maybe it’s time they wake up.

2 Replies to “Is the “retail apocalypse” only a suburban problem?”