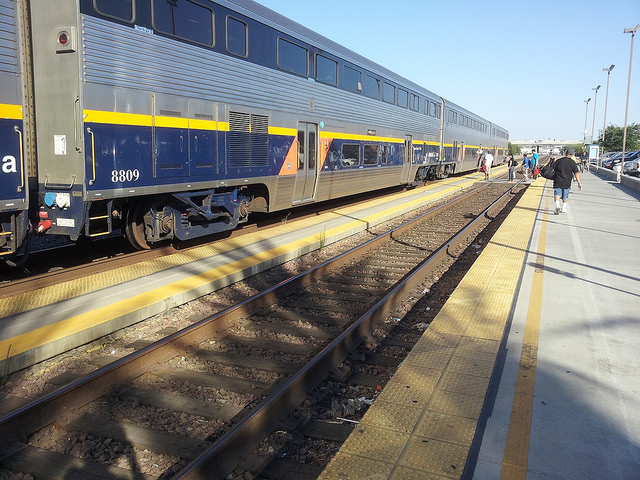 The stalled production undermines an ambitious plan to upgrade Amtrak service in California, Illinois, Michigan and Missouri and has highlighted the complexities foreign companies face in complying with made-in-the-U.S. requirements. Funding for about three-quarters of the 130-car order is tied to the American Recovery and Reinvestment Act of 2009.
…
After repeated failures, engineers are now redesigning the car’s body shell. That and additional testing will take about two more years to complete, according to people familiar with the matter. The entire job was to be finished in 2018, with the stimulus-funded portion due for completion in 2017. Now, Nippon Sharyo isn’t expected to start production until 2018, people familiar with the work say.

As a stop-gap measure, Amtrak California announced they would be purchasing two brand-new, but never used trains that were built for Wisconsin.

Unfortunately, things got worse.
The Talgos never showed up. Something happened behind the scenes and that purchase didn’t happen. Unfortunately, the media never pressed Amtrak as to why, so we don’t know what went wrong.
And rather than fix the problems with the bi-level trains, Nippon-Sharyo simply gave up. They couldn’t meet the safety criteria, and in September, they finally lost the contract. This week, Amtrak announced that Siemens would instead build the trains.
Now, there’s a lot of issues with this new contract. For one, the new trains will be single-level, rather than high-level. Secondly, there’s the issue of California having low level platforms, while these trains will be high level.
But for now, I’m going to focus on the operational issues this has caused.
Amtrak California has had ambitious plans to increase service. In 2016, The San Joaquin line received a new 7th daily round trip.
Earlier this year, they said things were on track for an 8th daily train in early 2018.
Well, it looks like someone finally told them that the new rolling stock they would need to keep this schedule wasn’t coming in time.
So this past September, plans shifted. Instead of an 8th daily train launching in January, the schedule would be reworked to create a new early morning Fresno train, designed to get people to Sacramento in time for a full day. This new schedule is set for “TBA 2018.”

The initiation date for Morning Express Service (Morning Express) was originally schedule for January 8, 2018. However, staff was recently informed by BNSF that they are planning an extensive capitalized maintenance project between Stockton and Fresno to replace railroad ties and sections of track, similar to the work completed in September and October of this year. This work is scheduled to begin on January 15th, 2018 and take approximately 6 to 8 weeks to complete. As a result of this work, a bus bridge and ongoing slow orders will be implemented during the work period. SJJPA Meeting Notes

In order to not piss off new riders, they’re delaying the changes and the marketing push (a good idea).Unfortunately for those south of Fresno, this shift meant a loss of one daily train.
The new schedule will have a train leaving Fresno at 4:25am in order to arrive in Sacramento at 7:41am. A bit early for me, but good for those with government business. The return trip will leave Sacramento at 5:30pm and arrive in Fresno at 8:40pm, continuing onto Bakersfield. Meanwhile, a train leaving Oakland at 5:55pm will arrive in Fresno at 9:52pm, and “sleep” there until it is needed at 4am.
These changes are optimized to help the Sacramento and northern Central Valley market. The changes will include expansions of parking lots at various stations north of Fresno in anticipation of new riders looking to get to Sacramento.So what about Bakersfield, Oakland, and other markets? Let’s take a look at the proposed schedule, compared with the current schedule. 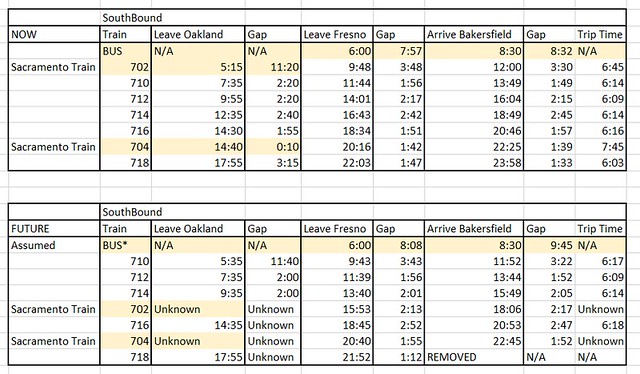 A few notes. The first line, “bus” operates with the intention of getting people from the lower Central Valley to Los Angeles and San Diego. You are required to buy a connecting train ticket. While it is not presented in the new schedule, I assume it remains the same. Additionally, as two of the trains terminate in Sacramento, passengers wishing to go to or from Oakland are put on a bus to Stockton. The new schedule does not yet include the times for these buses, but they will continue to exist.Takeaways:

When leaving Oakland, not much has changed. The first trip of the day is now a train, rather than a bus, and leaves 20 minutes later. As there is no transfer, this is now a faster trip.

At the end of the day, again nothing has changed. Which is a shame. 5:55pm is early for the last departure from the Bay Area.

In the middle, the train times were adjusted slightly to have a more consistent schedule, leaving at :35 (except the last departure). This is a minor, but nice change. We don’t know the new bus departure times from Oakland, but I really hope 704 is better. Right now, that bus leaves 10 minutes after the train, making it essentially useless. Because 716 leaves 5 minutes earlier, and 704 arrives in Fresno 22 minutes later, the bus should see a change so it is ever so slightly better.

For Fresno, not much has changed going south. Unfortunately, this is also true in Bakersfield. The earliest train now gets in at 11:52am, rather than noon. This still means you can’t use the train to get to Bakersfield for business.

If you’re going to LA, we don’t know yet if the train that terminates in Fresno will get a bus connection.

Now we look at northbound. Again, the first half is the existing schedule. 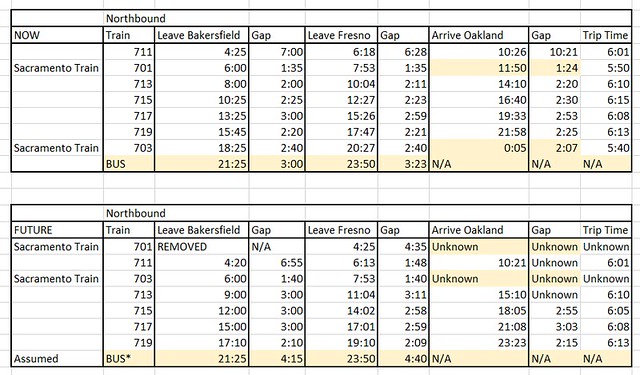 Here trains start in Bakersfield, and we get another small quality of life improvement, as more of the trains leave at a consistent time.

Going north, even though the first train of the day no longer exists, this actually only affects service at the end of the day. Folks from Bakersfield can still take a 4:20am train to head north (vs 4:25am). Additionally, they may be able to board a bus that will get them to Fresno in time for the connection. This in turn will actually help people coming up fro Los Angeles, that would have a new departure around 9pm.

But now the last train north leaves way too early at 5:10pm. The 9:25pm trip is intended for those coming from Los Angeles, so Bakersfield passengers cannot board the bus to Fresno.

Fresno sees a new early morning option to Sacramento, which presumably will include bus connections to the bay. But here too, the last train of the day now leaves northbound earlier, at 7:10pm, versus 8:27pm.

In conclusion, this is a loss of service for Bakersfield, a small gain for Fresno, and a big gain for the North Valley.

However, I can see some easy opportunities to make it better. If the last train of the day in both directions is pushed back, it increases trip opportunities. For example, if the last northbound train leaves Bakersfield at 6pm, it would hit Fresno at 8pm.If the new trains do arrive quickly, the train authority does say that an 8th daily train is on track to be added in the next couple of years. If that train were to run from Bakersfield to Sacramento, it would address some of these issues. If a 9th daily train does follow, which is in the long term plan, trains could operate a full day every 2 hours, leaving from 4am to 8pm northbound, and 5am to 9pm southbound. That would be a pretty great schedule, allowing for all kinds of trips.

Once this new schedule goes into effect next April or May, I will follow up with the final bus details.

You can explore these proposals for yourself on this website.