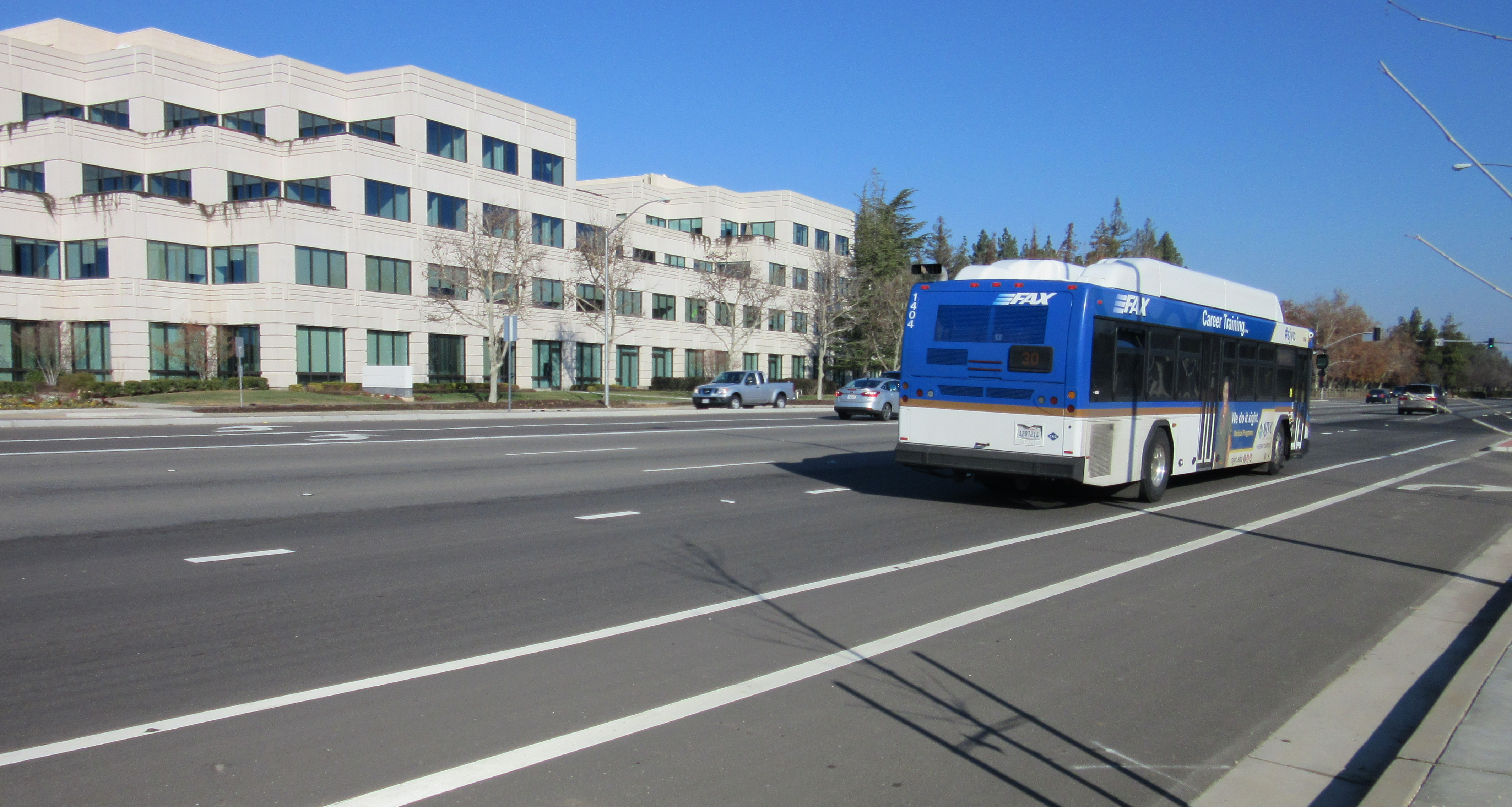 For the first time in forever, Fresno Area Express (FAX) is seriously considering some pretty major changes to bus routes. This could include the much-needed Herndon route, and a bus line to the new Amazon and Ulta warehouses built in southwest Fresno. However, the new service comes at the expense of existing lines. In this post, I take a look at how FAX is getting the word out, and what those changes are.

FAX has started holding public events and workshops on the proposed changed. This looks to be an extensive outreach effort, with the following pop-up events at bus stops throughout the system:

And the following workshops:

In addition, there is an online survey open until March 6. You can also send emails to FaxOutreach@fresno.gov .

I am particularly impressed to see them do the pop-up events at the bus stops, which is a much more effective outreach strategy than a midday workshop that no one has the time to get to. Of course, even a midday workshop is better than waiting until the day of to tell people about changes. That being said, all these events are still within the standard 8am-4:30pm government workday on weekdays, so they aren’t reaching off-peak riders.

This isn’t the first time FAX has talked about changes. You might remember back in 2016, when FAX started talking about the trade-off between frequency and coverage (see their PDF here). That process built on some surveying done in 2014. Before that, FAX was looking at changes in 2012, which mostly rolled out when Q launched.

That being said, very little has changed in terms of the overall network. Night service was launched, as was improved frequency on three routes. But coverage? Not since 1999 when Children’s Hospital opened and got a short route. This post summarizes many of those older changes.

Northern end of Route 28: Currently, 28 passes the Manchester Transit Center going north, (LOL), turns right onto Dakota, then left on 1st, then right to reach Shaw to Willow. It terminates at Fresno State. The proposal is to simply remain on Dakota until Peach. Service would remain every 20 minutes. As seen below in green, this would add an east-west route where none currently exist.

This would not result in a loss in coverage, as routes 34 and 9 currently serve 1st and Shaw. This would result in new service on Dakota, which has not had bus service before. However, customers used to a one-seat ride may have to transfer. This might have a potential impact to many Fresno State students. I want to add a better map but the FAX website won’t give me one. This change is proposed for August 2020.

Most of Route 45. Route 45 is sort of dumb. Just look at this bad boy. It tries so offer some Herndon coverage, some north-south coverage, and also some east-west coverage, but not in a way that a single rider would ever want to actually ride.

Most of it would be cut. Instead, 45 would just run east-west along Ashlan all the way to Polk. This would be a big increase for Ashlan, which does not have any bus service, but a loss for Fruit, which has no substitute line. Ashlan should absolutely have a bus line, and the fact that it doesn’t is a product of the system being designed in the 70’s when Shaw was the end of Fresno. Does Fruit need a bus line? Well, it’s like 95% low-density residential, so it only has one-way trip demand. That being said, maybe it’s time to bring back the road diet?

This is what the new route would be. Note that service would still be every 60 minutes. The route looks shorter, so it means one of the buses is going to another route. The southern parts of the route have other bus lines, but the Tower will lose frequency and a direct connection. Keep reading for Herndon… This change is proposed for August 2020.

New route 3! There used to be this fantastic document online that cataloged every FAX change since the system had horse-drawn trolleys. I can’t find it online right now (anyone have a link?). Presumably, there was a route 3 somewhere downtown. Well, now FAX wants to bring back Route 3 but on Herndon.

As you can see above, Route 45 currently runs along parts of Herndon, but that will go away. Enter Route 3! It would run from El Paseo shopping center to Willow and Herndon at 40 minute frequencies. Here it is in green, filling an important service gap:

Of course it SHOULD keep going into Clovis at least to the Walmart Center at Herndon and Clovis. Add that to your feedback folks! This change is proposed for August 2020.

Route 20 would migrate north (just like Fresno!). Currently, Route 20 starts downtown, runs up Blackstone to McKinley, and then cuts west to Hughes. It eventually ends up at Shaw and Brawley. It’s clearly a route designed to bring people from Fresno’s “northern” suburbs to the jobs downtown. It runs every 30 minutes.

The new Route 20 would not go downtown at all. Instead, it would stay on McKinley and run all the way to the airport. This would provide new service to FAT, along with existing routes 39 and 26. Folks going downtown would have to transfer, likely at Blackstone.

Service would also increase to the north. From Shaw and Marks it would run up Marks to Bullard, and then around Fig Garden Loop. This would be new service for an area with decent residential density. HOWEVER, the bus would run every 40 minutes instead of every 30. This change is proposed for January 2021.

The plan here is just to eliminate the little loops the 12 and 35 do at the ends of their runs and combine them as one single through-running route. They didn’t say if they’ll call it the 12, the 35, or something new.

Each route runs every 30 minutes and that wouldn’t change. Seems like a no-brainer. No one loses service, and people have a new way to go further without a transfer. This change is proposed for January 2021.

New Route 29. You know those giant warehouses the city of Fresno has been funding via massive tax subsidies? Well, they’re all in the middle of nowhere. And while the city said there would be bus service when they opened….that never happened. Under this plan, route 32 would end downtown, and the new route 29 would take over southwest duties with an extension to the warehouses. This change is proposed for Spring/Summer 2021.

I don’t know guys, maybe you wouldn’t need grant funds if you collected the taxes up front?

Best as I can tell, this is what the changes are. Green is new service, red is removed service.

I’ve probably made mistakes. If it helps, this is what FAX is providing, which I found a tad confusing. The PDF is here. They also use green for new, red for removed, but routes affected also keep their original colors.

Remember, all these changes essentially cost FAX zero. They’re not adding service – they’re just moving service around. The exception is Route 29 with the proposed grant funding.

Overall, I think these are good. Merging 12 and 35 seems like common sense. Herndon has been crying for service for years. The missing east-west routes stuck out like a sore thumb. A new bus to the airport makes sense.

The one thing I’m iffy about is where they’re taking Route 28. The current terminus, Fresno State, is an obvious ridership generator. The new terminus, looks like this:

Are there plans to redevelop that abandoned golf course? If so, it makes sense. If not, this doesn’t. Additionally, students who live in Southwest Fresno would lose a direct trip to Fresno State and might even have to transfer twice.

Also, as I mentioned earlier, Route 3 should go to Clovis Ave. “But that’s Clovis!”. Well, Clovis already pays for service on Shaw, they should throw in some cash for Herndon. Did anybody call them? I’d also like to note that the survey mentions Clovis Community College, but no bus service is proposed there.

Anyone else have thoughts on stuff I surely missed?