About a year ago, I took a look at air service available from Fresno Air Terminal (FAT). In that post, the news wasn’t good. Fresno had lost service to Las Vegas by US Airways and United, leaving only Allegiant. Allegiant dropped Honolulu, but added Mesa (Pheonix), which they apparently are no longer selling tickets for (as of last week!). Frontier left, again. Bakersfield lost Houston, and Visalia lost all service. The switch away from propeller airplanes meant Fresno got larger planes – but less frequency. Click to read more!

A few years ago, I though Fresno Air Terminal (FAT) was prime for the addition of new flights, especially as the economy picked up. Jetblue was, and still is, rapidly growing. Virgin America was ready to compete with big plans. Southwest was continuing its slow-but-steady expansion into more and more cities, and disruptive airlines like Spirit were popping up. Surely new service to Houston, Chicago, and maybe Atlanta was coming to Fresno sooner rather than later.

Yet here we are in 2016, and the only innovative or low-cost airline to serve Fresno is Allegiant Air, an airline that surprisingly was founded and headquartered in Fresno before leaving for Vegas. At one point, they offered service from Fresno to Reno, Portland, Lake Tahoe, and Long Beach. They served Hawaii from Fresno in 2012, but mostly abandoned that market in 2014. Today, from Fresno, they only serve Las Vegas and Mesa, Arizona (new for this year). Click to read more! 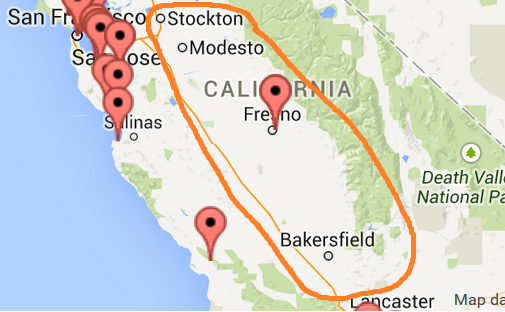 One of the most frustrating parts about journalism in California, especially in regards to high speed rail (HSR), has been the inability of reporters to see beyond their personal bubble. Many times, it seems like these journalists take their own experience, and extrapolate it to be the “California experience”. For example, if they drive everywhere, then “everybody drives”. Or, when it comes to travel within the state, “everybody flies”. For a rambling discussion at the bar, that’s not an issue, but when these journalists write for major newspapers and get to set the tone, it loses all its amusement. Click to read more!