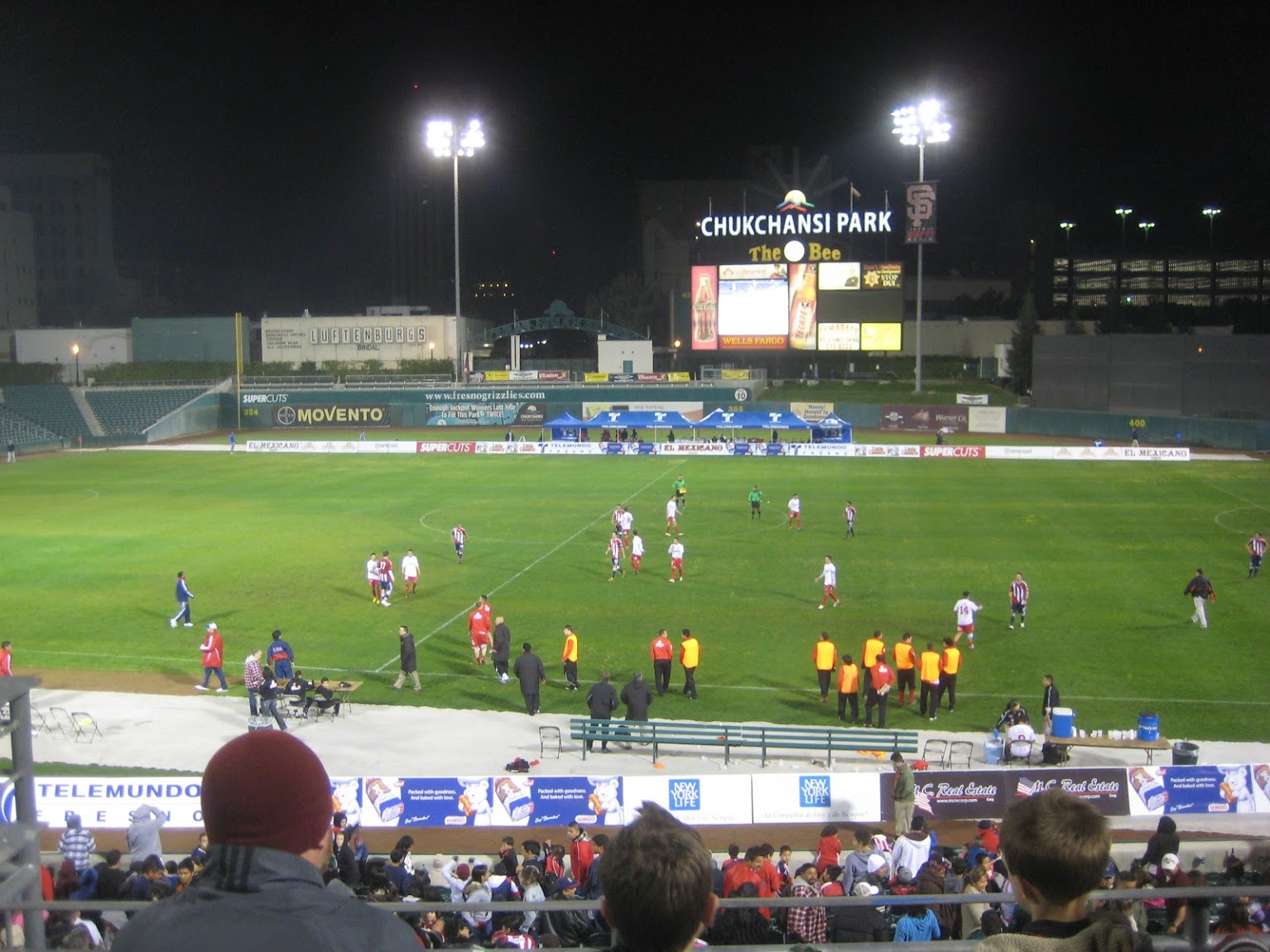 I’m not a fan of flashy “silver bullet” projects that promise to revitalize depressed areas. Most recently, Fresno promised that removing the Fulton Mall and turning it into Fulton Street would revitalize the area. That hasn’t happened. Fifteen years ago, Chukchansi Park was sold with the same promise. Build a new stadium,, and people will come downtown to watch AAA baseball!

Well, sort of. People do go to the stadium to attend events and Grizzlies games. But they drive in, park across the street, watch the event, and then drive away ASAP.

That shouldn’t have come as a surprise, for a number of reasons.

For one, baseball is a pretty self-contained event. The whole tradition is to spend a few hours in the ballpark, eating hot-dogs, drinking beer, and chatting. The team in turn encourages this by selling ticket packages that include concessions, or advertising cheap beer. That doesn’t lend itself to supporting local business.

Secondly, baseball fans are old. According to this, the average MLB viewer in 2016 was 57, older than typical NFL, NBA, NHL, and MLS fans. Those older fans are also going to be less likely to give downtown Fresno a chance, and be less interested in engaging in some kind of pub-crawl and such. Walking around downtown at 9pm? Heavens no!

And on top of that, losing affiliation with San Francisco hasn’t helped. Grizzly attendance is down since that happened. In 2017, they averaged 6,208 fans per game, down from 7,430 a decade earlier.

So what about the new professional soccer team, Fresno FC? Will it revitalize downtown?

No, but I think it will be more helpful in moving the dial than the Grizzlies were. As a bonus, it’s good to see that the expensive stadium will get more use.

If your not familiar with how professional soccer is structured in the US, here’s a quick primer:

Major League Soccer (MLS), is the top league, or division one. They’re the one you can watch on ESPN, and they pay big bucks to famous players.

United Soccer League (USL) is 2nd division, sort of like AAA baseball, which is where the Grizzlies sit. There’s a couple of differences though. In baseball, AAA teams are closely tied to a major league team, and act as a training ground. That’s pretty much their purpose, prepare players for their MLB affiliate team. Players come and go depending on what the MLB team needs.

In soccer, that’s not really the case. Around the world, teams can move between divisions via promotion and relegation. Do badly in division 1, and down you go. Do well in division 2, and up you go. Not so in the US. In the US, you buy your way up, like in the NFL and the other pro-leagues.

Essentially, in the US, USL exists so secondary cities, like Fresno, can have professional soccer. Now, while USL teams do affiliate with MLS teams, they don’t act as a training ground at all.

On top of that, there is USl2, which sits below USL in the third division. In the US, this is sort of a dumb level. Not much going on here. If Visalia got a team, it would probably be USL2.

PDL (and a few other leagues) are fourth division, where the Fresno Fuego played. These folks are semi-pro. They’re pretty different because they mostly just play their games in the summer, and the teams are primarily staffed by college players who need to stay fresh while they are on vacation. The rest of the team is filled in by players who do get paid, but just barely. There are tons of fourth division teams all over the country. They’re not very stable, and the Fresno Fuego were one of the most successful teams, both in performance and attendance. That team will continue to live on as the Fresno FC Under 23s. (Which I’m not a fan of, Fresno Fuego was a good name and brand).

I know in Fresno, a lot of people were disappointed when they read that we were getting a professional team…but not MLS. The expectation was that the team would be a lot like the Grizzlies. However, there’s one key difference between AAA Baseball and USL Soccer:

The Grizzlies will never play the SF Giants.

But Fresno FC will most likely play real competitive games against MLS teams like the LA Galaxy.

In soccer, teams play their regular season against teams in their division. So Fresno will play other USL teams like Las Vegas, Sacramento, Reno, Phoenix, and Orange County on a consistent basis.

But on top of that, there is the “US Open Cup.” This is a tournament open to ALL soccer teams in the US. Really, all of them. If you and your buddies want to get a team together, you could potentially qualify (but it’s a long road!).

For the Fuego, qualifying was tough. Qualification rules varied by year, but essentially they had to win their PDL division to qualify. Once in, they had to play a few rounds with lower level teams before matching with an MLS team.

For Fresno FC, qualification to the US Open Cup will be automatic, every year. And USL teams skip the lower levels.

For reference, in 2003, Fresno beat the Chico Rooks (an amateur team), the Utah Blitz (3rd division), El Paso Patriots (USL), and then matched with the LA Galaxy.

Fresno FC will likely start off against a PDL team, and then get matched with a MLS team. If they win, likely another MLS team.

That’s real competition against teams with big names. And if Fresno FC manages to win the cup, they get entered into the CONCACAF Champions League, which includes the best teams from all over North America. I’m not saying that’s likely…but in 2009, the USL team Montreal Impact reached the quarter finals, and attracted 55,000 people to their match against Santos Laguna from Mexico.

Aside from the US Open Cup, USL teams do attract MLS teams for pre-season friendly matches, and can also book international teams. Fuego had some success setting up matches against teams from Mexico, and it will be a lot easier for Fresno FC, as a professional team, to keep doing that. Fuego also hosted a couple of games against MLS teams, but I think it was really just twice. For Fresno FC, expect it every year.

Basically, more important games against bigger name teams mean that MORE people will be coming downtown to the games. I think Fresno FC will easily start beating the Grizzlies in attendance.

If you want to learn more about the US Open Cup, this website is a great resource. 108 amateur teams entered qualifying, with 94 teams playing the main tournament.

The First Round will feature all 52 amateur clubs with the 26 winners advancing to Round 2 (May 16) where they will be joined by all 22 United Soccer League clubs. Defending champion Sporting Kansas City and the rest of the Major League Soccer clubs will join the competition in the Fourth Round (June 4-5), where they will be joined by 12 Third Round winners. Click to read more!